The total mortality rate in the Netherlands was not elevated in the week of 25 February to 3 March 2021 (deaths reported within two weeks – about 97% reported). A total of 3,059 deaths were reported in that period; we would normally expect to see between 2,820 and 3,147 deaths at this time of year. There were 228 reported deaths from laboratory-confirmed COVID-19 that week. Mortality was still elevated in the combined region of Groningen/Friesland/Drenthe.

At present, the Netherlands is in a second wave of the COVID-19 epidemic, with significantly elevated mortality from the week of 1 to 7 October 2020 (week 40/41) to last week, 24 February 2021. Total mortality during that period is estimated at 12,727 deaths (based on deaths reported within 2 weeks). 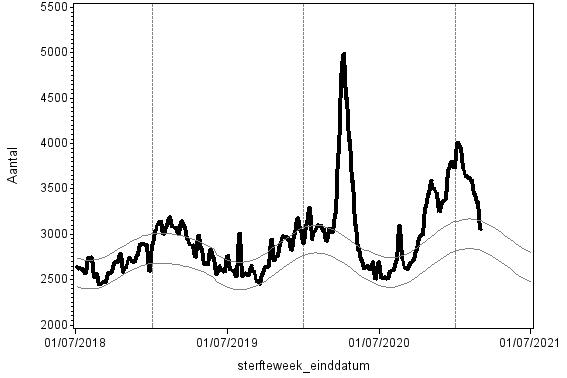 Figure. Mortality in the Netherlands reported within 2 weeks (all ages and regions combined)

The different lines on the chart can be explained as follows:

What is excess mortality?
Statistics Netherlands (CBS) monitors how many people die in the Netherlands. By looking at deaths in previous years, it is possible to estimate the expected number of people who will die in a given period. If more people die than estimated for that period, it is referred to as excess mortality. Excess mortality is a temporary, exceptional increase in the number of people dying in the Netherlands. This often coincides with unusual circumstances, such as a flu epidemic, a heat wave, or the current COVID-19 epidemic.

Why is excess mortality being monitored?
Higher mortality in the short term could be coincidental.  To find out if there is more going on than the usual short-term fluctuations in mortality, Statistics Netherlands (CBS) and RIVM compare actual mortality in a certain period with the expected mortality in that period. If that comparison reveals excess mortality, meaning that more people are dying than expected, something unusual may be happening. That is important information.

Was the excess mortality in 2020 entirely due to COVID-19?
Statistics Netherlands (CBS) has noted the cause of death for all deaths in the first eleven months of 2020. The cause of death is recorded by the attending physician. If the coronavirus SARS-CoV-2 played a crucial role in the patient’s death, as assessed by the physician, then COVID-19 is recorded as the cause of death. The data shows that the elevated mortality rate until 1 December 2020 was due to COVID-19, with the exception of elevated mortality during the heat wave in August 2020.

How many people have died of COVID-19 during the second coronavirus wave?
We do not know yet. The final figure will not be available until Statistics Netherlands (CBS) has processed all the cause-of-death forms.