The EU White Paper on a Strategy for Europe on Nutrition, Overweight and Obesity related health issues addresses actions that can be taken at local, regional, national and European levels. One of the priorities in the strategy is ‘making the healthy choice the easy choice’. It is aimed at improving the nutrient composition of foods, and entails reformulation of foods and food innovation.

RIVMNational Institute for Public Health and the Environment study

Making the easy choice the healthy choice by improving the quality of foodstuffs is one of the Dutch EU presidency priorities. To underpin a thematic conference and subsequent Council Conclusions on the improvement of food products, the Ministry of Health, Welfare and Sports commissioned an inventory of food content variation in salt (sodium), saturated fat (fatty acids) and sugars in seven countries: Finland, France, Germany, Italy, The Netherlands, Slovakia and the United Kingdom. This work was carried out by the National Institute for Public Health and the Environment (RIVM) using data from the EuroFIR-FoodExplorer database.

The study focused on specific food groups (bread, soup, sausages, cheese and breakfast cereals) that were selected because they contribute to a relatively large degree to the intake of salt, saturated fat, and/or sugar. Results showed considerable variation in salt, saturated fatty acids and sugar contents within specific food groups. For example, large salt content variation was found within the ‘soup’. This is not only due to different types of soup (for example, tomato soup, pea soup, and bouillon), but also due to variations in one type of soup. 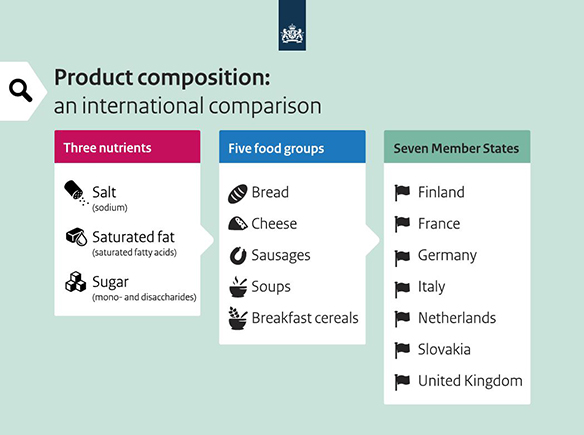 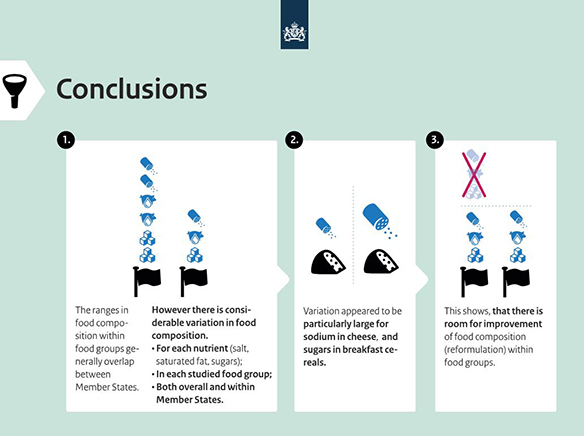 Insight in food composition variation within food groups is an indication of the possibility to lower the contents of salt, saturated fat and sugar or -in other words- of the possibility of food content reformulation. Insight in the current situation is needed to develop future actions e.g., to decide on maximum levels within food groups, and to monitor changes in food composition over time. RIVM appreciated support from the representatives from the seven countries for sharing their data, the Eurofir office and the German Bundesforschungsinstitut für Lebensmittel for their assistance in collecting the data used in this study.