The information on this webpage will be updated shortly.

The coronavirus SARS-CoV-2 is mainly spread between adults and from adult family members to children. The spread of COVID-19 among children or from children to adults is less common. In general, the younger the children, the less significant the role they play in spreading the virus. Read more about the spread of the virus.

Children become less seriously ill and almost never need to be hospitalised because of the coronavirus SARS-CoV-2; see the overview of the COVID-19 epidemiological situation in the Netherlands.

In the period following the summer holidays, an increase in the number of COVID-19 infections was observed in all age groups. Among children, the number of infections increased particularly among young people aged 13-17 years. Yet children only play a minor role in spreading the coronavirus SARS-CoV-2 compared to adults. However, the number of infections in children and how contagious they are do increase as they get older.
For that reason, it is and remains important to follow the basic recommendations as well as possible, at school and at home. That includes the hygiene rules and the guidelines for testing and staying home that apply to children.

The Municipal Public Health Services (GGDs) have investigated clusters at secondary schools; their findings indicate that the coronavirus SARS-CoV-2 is spread outside school in over half of the cases. When that happens, it is mainly during intensive contact with friends or classmates in their free time. Infections in schools are mainly seen in small groups among students, and separately among teachers. For that reason, classmates do not generally all have to be quarantined. If a child has had intensive contact with friends and classmates outside of school, they should go into quarantine. If a student tests positive for COVID-19, the GGD analyses which contacts need to be quarantined. There have been hardly any cases involving transmission of the coronavirus SARS-CoV-2 between children at primary schools.

Education is important for the well-being, development and health of children and young people. For that reason, efforts are being made to keep schools open as much as possible to prevent negative effects from closure or limited opening.

Hygiene in childcare facilities and schools

Good hygiene (and hand hygiene) help prevent COVID-19 from spreading. There are hygiene guidelines for childcare facilities, kindergartens and after-school childcare (in Dutch), and primary schools (in Dutch). For secondary schools, the general hygiene guidelines (in Dutch) are being followed. In addition, pay extra attention to cleaning frequent touch points, such as door handles, toilet controls, light switches and banisters. Also regularly clean electronic devices, such as computers and tablets, for example with a dry microfibre cloth.

Ventilation and airing in childcare facilities and schools

Ventilation is important for a comfortable and healthy indoor climate in childcare facilities and schools. Ventilating refreshes the indoor air with outside air. Good ventilation also helps to limit transmission of respiratory infections, such as COVID-19. For that reason, it is important to properly ventilate homes, businesses and other buildings, such as schools. This can be done by leaving windows open at a tilt, by opening ventilation grilles or gaps, or by using mechanical ventilation systems. Indoor spaces where multiple people will be spending time, such as classrooms, should also be aired out. This should be done at times when the indoor spaces are not occupied by multiple people. Air out the indoor spaces for 10 to 15 minutes by, for example, opening windows and doors across from each other during the break. This quickly refreshes the air inside the room. Read more about properly ventilating classrooms in the ‘Protocol on education at school during corona’ (in Dutch) and the ‘ventilation guidelines’ (in Dutch).  It is also important to follow the basic recommendations.  For example, wash your hands regularly and stay home if you have symptoms.

The website of the Dutch Government offers more information on the coronavirus SARS-CoV-2 in the context of various types of childcare and education. The site also provides detailed information for schools, such as protocols to minimise the spread of the coronavirus:

RIVM.nl also has more information for Pregnant workers (only in Dutch)

Researching the role of children in the spread of the virus

RIVM is conducting various studies on the role of children in the spread of the coronavirus SARS-CoV-2:

​Between 18 September and 20 November, children aged 12 and under were rarely tested. The data from this period therefore provides a less accurate overview than the data from before 17 September, from 20 November, and from 1 January 2021 onwards.

As of 1 January 2021, the testing policy for children under 12 has been aligned with that for children over 12 years old. It is possible that the number of tested children and newly reported infections in these age groups may increase slightly again in the upcoming period. The testing policy has not changed for children aged 13 to 17 years, so there is a continuous overview for this age group.

Two children have died of COVID-19 in the Netherlands.  These cases concerned children with serious underlying disorders.

Since 1 June 2020, all Dutch people with (mild) symptoms can be tested for the coronavirus. The figure below is based on data from the GGD test lanes.

From 1 June to 30 November, over 320,000 people working in education or childcare were tested. 6% of these employees tested positive. This percentage is lower than the total of 9% of the over 4 million adults tested in the test lanes in the same period.

Spread of COVID-19 between people in the same age group

When reporting a COVID-19 infection, it is also possible to report which other person is a probable source of the infection. This data shows that COVID-19 is primarily spread between people who are about the same age. The figure below shows data (up to 14 September 2020) on 7,641 paired people with COVID-19, displaying the ages of both the source patient and the person that they infected. Transmission of the virus appears to take place mainly between people of about the same age, and less frequently between parents and children (of all ages). 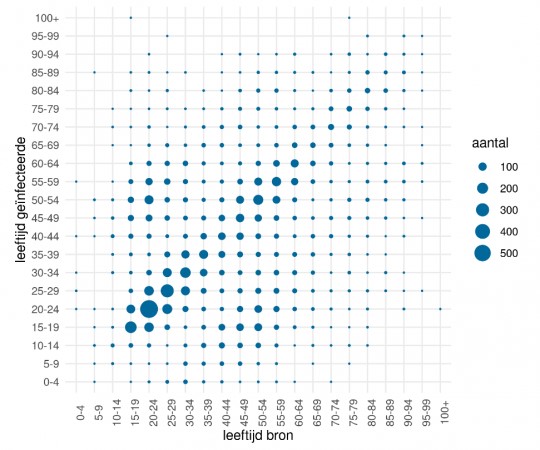 Infected contacts according to the age of the source patient 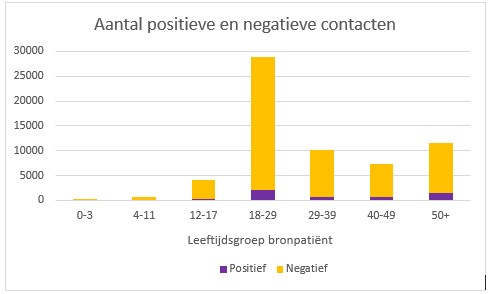 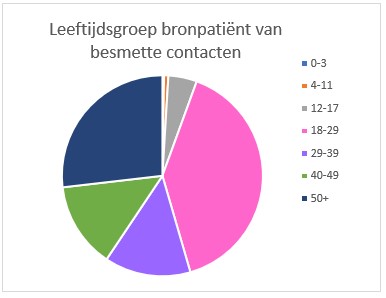 Around 40 GP practices in the Netherlands are registering the number of patients visiting the practice with flu-like symptoms; these are the Nivel monitoring stations. Using a cotton swab, a smear is taken from the nose and throat of some of these patients; the resulting culture is examined in the laboratory to detect viruses, including SARS-CoV-2. A COVID-19 infection was detected in three of the 210 patients under the age of 18 who were tested (1.4%). Of the 1236 adults who were tested, 98 tested positive (7.9%). This is based on data from February 2020 to 4 January 2021.

In spring 2020, RIVMNational Institute for Public Health and the Environment conducted a study to find out more about people infected with COVID-19 and their family contacts. In cooperation with GGD Utrecht, various families took part in this study. A total of 54 households took part up to mid-April, involving 239 participants, including 185 household members. The results of this study are now known. In this family-based study, there were no indications found in any of the 54 participating families that a child younger than 12 years old was the source of COVID-19 within the family.

Children are not always required to stay 1.5 metres apart from each other and/or from adults.
See the details for the 1.5-metre measure among children on Government.nl.

My child has symptoms. Can my child attend childcare, primary school or secondary school?

Information on when to keep your child home from childcare or primary school can be found at Government.nl. Children and adolescents in vocational education (MBO) or higher education are subject to the basic rules for staying home that apply to everyone.

Should I stay home because my child has symptoms?

Can I have my child tested?

Specific rules apply for young children (0 to 4 years) and primary school children; see Government.nl. Children and adolescents in secondary school, vocational education (MBO) or higher education are subject to the basic rules for testing that apply to everyone.

My child belongs to a risk group. Can my child go to school, childcare and after-school care?

Can COVID-19 cause a severe inflammatory reaction in children?

There are reports from other countries about a number of children who have had a severe inflammatory reaction, which has been linked to COVID-19. These kids developed a fever, skin rash and inflammation around the heart. The symptoms are similar to Kawasaki’s disease. Further research is needed to determine whether there is a link with COVID-19. For now, that link has not been confirmed.

What about the vaccinations for my child in the National Immunisation Programme and the coronavirus SARS-CoV-2?

It is very important for your child to receive the usual vaccinations from the National Immunisation Programme. If, for example, you postpone the 14-month shots, there is a risk that your child will contract diseases such as measles and meningococcal meningitis. These are highly contagious diseases that still occur in the Netherlands. If you or your child has cold symptoms or a fever, or if someone in the family has a fever, please contact the well-baby clinic.

Would you like to know more about vaccinations and the coronavirus SARS-CoV-2? Go to the frequently asked questions on the site of the National Immunisation Programme (in Dutch).

More questions and answers about COVID-19