How liveable and healthy is the Utrecht region really? The Atlas for the environment drawn up by RIVM already includes some maps that answer this question. For example, maps in which red ('insufficient quality of life') indicate areas in Utrecht where fine dust, noise and radiation are highest and cause trouble. This, in particular, is found at intersections of major roads. The area surrounding Utrecht Central  Station – coloured orange – scores average; a few peripheral areas with woodlands and water are coloured bright green (assessment: 'good'). Water management has not yet been incorporated into this atlas. 'That would be a good addition,' says RIVM adviser Ronald Smetsers. 'Clean surface water, plenty of drinking water, knowing in time where a flood threatens. These aspects also contribute to a healthy environment.' The Deltares Institute creates maps, specialising in the field of water, subsurface and infrastructure. 'We draw up maps that indicate, for example, where rivers can flood,' says Deltares researcher Hans Gehrels. 'Or maps that show where the water may contain foci of infection.'

We spoke to Ronald Smetsers and Hans Gehrels in the Deltares building at De Uithof in Utrecht. Three hundred people work there, with another 600 people working at Deltares in Delft. Smetsers and Gehrels belong to the group of five initiators of the Knowledge Centre on Healthy Urban Living, established in November 2013. Apart from RIVM and Deltares, the KNMI, TNO and Utrecht University are also partners.  At the beginning of 2013 the Ministry of Infrastructure and the Environment asked these knowledge institutes to integrate their research to a greater extent. All four of these institutes have expertise in monitoring and modelling certain urban environmental characteristics that affect the health of the population. This includes water, soil, weather and air. However, to date the institutes have tended to operate on their own. The new Knowledge Centre will join research, knowledge and information systems in this field, and by doing so they will also profile the Utrecht region.

'The problems cities have to deal with are becoming increasingly more complex', says Ronald Smetsers. 'It is no longer possible to resolve these problems from a single sector. Take the ageing population, for example. It will soon save local authorities money if people remain healthy and selfsufficient for a longer period of their life.' However, to achieve this all aspects will have to be studied, say the researchers. For example, the city must be organised in such a way that people of all ages can walk or cycle with ease, while the city should remain accessible. 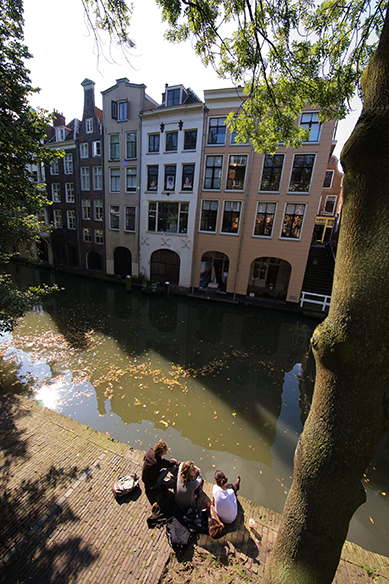 Water management forms an essential part of this: water features provide significant cooling in summer and contribute to relaxation, while transport by boat may even reduce the traffic on the road. Deltares now has a project in Bandung, a city of millions on the Indonesian island of Java. 'We are looking at how resourceful water management can decrease the chances of infectious diseases such as diarrhoea,' says Hans Gehrels. 'We are also testing the water for toxic substances and micro-organisms. In a project such as this we could make good use of the extensive knowledge of RIVM on infectious diseases. TNO may perhaps contribute to the local water purification.' 'With Utrecht as an example, we can show the rest of the world that our approach works.'

Based on radar images, KNMI produces real time charts of actual rainfall. These charts could be linked to models of Deltares that predict flooding in certain areas. Because of climate changes such flooding is expected more frequently in many delta areas. Ronald Smetsers: 'The next step will then be an app that warns motorists real time. For example, an app that gives motorists a warning: in an hour the motorway exit to Zeist will be flooded, please take a different route.' Various companies are now developing software and apps that provide information aimed at city-dwellers or government organisations, for example, information on where the soil is still toxic, or where good cycling paths can be found. An aspect where this new Knowledge Centre differs from others is that it also collects data itself, and that the data and software are basically public. Companies can then use this data to develop apps, software or other products aimed at the customer. The Dutch government will support the Knowledge Centre, and the EU (Horizon2020) and foreign governments are also potential sources of funding for joint projects. Ronald Smetsers: 'We start with the Utrecht region.' Hans Gehrels: 'With Utrecht as an example, we can show the rest of the world that our approach is working.'