What is tick-borne encephalitis?

There are several types of TBE virus. In general, all  types cause infections with a similar disease progression. The TBE virus which occurs in Far-Eastern Russia often causes more serious disease. The risk of an infection after a tick bite is very small, because only very few ticks are infected with the TBE virus. People who have been infected after a tick bite usually do not present any clinical manifestations. Otherwise the disease often comes in 2 phases. The incubation period of 7-14 days is followed by a phase  in which a patient suffers from fever, fatigue, general malaise and headache. This usually lasts 2-7 days and is followed by an asymptomatic period of approximately 1 week, In the second phase of the disease the patient has symptoms such as severe headache and encephalitis, meningitis or meningoencephalitis. In this stage the patient needs to be admitted to a hospital. Some patients will develop unresolved neurological aspects. Approximately 1-2% do not survive. There is no specific medication to treat tick-borne encephalitis.

How common is the tick-borne encephalitis virus?

Where in the Netherlands does the tick-borne encephalitis virus occur?

The risk of an infection after a tick bite is minimal in the Netherlands, because only very few ticks are infected with the TBE virus. RIVM keeps track of the number of patients that become seriously ill due to  contracting TBE in the Netherlands. We are also investigating the spread of TBE virus in wild animals and ticks, in collaboration with DWHC, WUR and Artemis.

Between 2016 and 2020, twelve patients have been reported to have contracted tick-borne encephalitis in the Netherlands. The most likely places of infection are the Sallandse Heuvelrug, the Utrechtse Heuvelrug, central North Brabant, the north-east of the Flevopolder, Twente and the Achterhoek.  At the border with Germany in the Achterhoek and east of Nijmegen, the TBE virus was found in small rodents. Research for antibodies showed that roe deer in North Brabant, Limburg, Overijssel and the Achterhoek had been bitten by ticks with the TBE virus. Further research is ongoing into the spread and ecology of the TBE virus in the Netherlands.

Overview of tick-borne encephalitis virus in the Netherlands 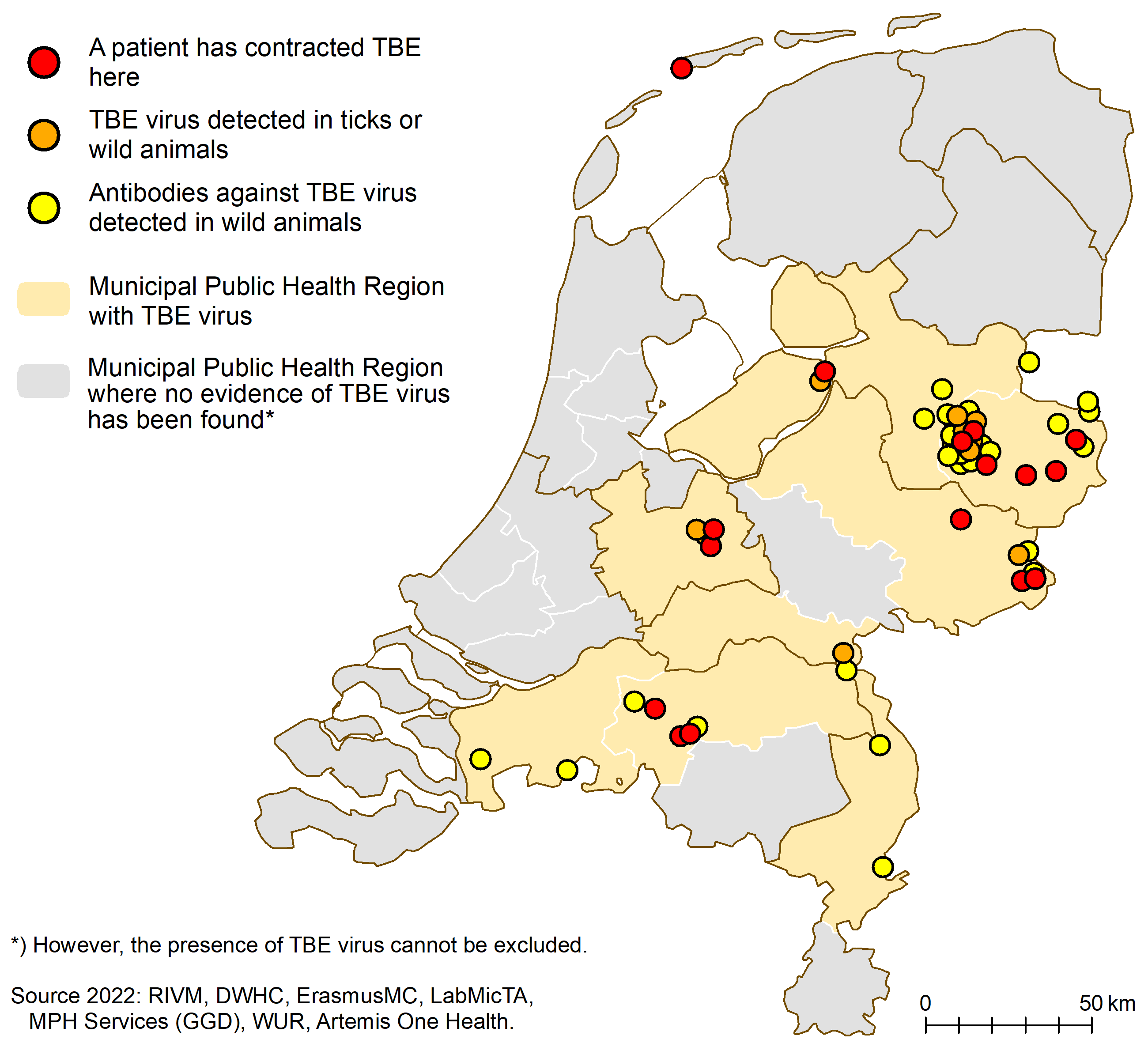 This map shows the occurrence of the TBE virus in the Netherlands (source: DWHC, WUR, Artemis and NorthTick, December 2022).

The TBE virus is transmitted by infected ticks to humans . There is a vaccine that gives 95% protection. People who stay for a long period in areas where tick-borne encephalitis occurs, can have themselves vaccinated; this is recommended for example in parts of Central and Eastern Europe. For information about countries where vaccination is recommend,  we refer to the website of the National Coordination of Advice for Travellers (Landelijke Coördinatie Reizigersadvisering). For the time being, there is no reason to vaccinate people in the Netherlands.

Removing  ticks as soon as possible reduces the infection risks of viruses they may carry, such as the virus that causes Lyme disease. TBE virus, however, is transmitted shortly after the bite. So, quickly removing the tick will not always prevent infection. Tick bites can be prevented by wearing protective clothing and by  using  repellents that contain DEET on exposed skin. Repellants do not protect 100%, so tick bite checks remain a necessity after being outdoor/in nature. TBE virus is rarely found in farm animals, such as sheep, goats and cows. The virus is than excreted in milk. As a result people could be infected by drinking unpasteurized infected milk or eating cheese made from infected milk.

After recording 80,000 tick bites in 10 years via Tekenradar.nl, we now know that you are most likely to be bitten by a tick in Drenthe. Quickly removing the tick halves the chance of contracting Lyme disease.

Spread of tick-borne encephalitis virus in the Netherlands

Every year about 1.5 million ticks bite someone in the Netherlands, especially between March and

One in 5 tick bites occurs in an urban area.

For the first time, a person in the Netherlands has fallen ill after a bite from a tick carrying