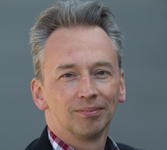 Harmen studied physics, astronomy and geophysics at Utrecht University, graduating with distinction in geophysics in 1994. His PhD on seismic tomography in 1999 led to publications in the journals Nature and Science. After a short period as a trainee at Statistics Netherlands, he became a researcher at RIVM’s Laboratory for Radiation Research in 2000, becoming a project manager in 2005. His work involved the nuclear incident planning, chain modelling for radioactivity and, in particular, mechanistic modelling for carcinogenesis and atherosclerosis. Since 2003, he has also been involved in patient safety, quality assurance and technical developments in medical radiation applications (radiodiagnostics, radiotherapy and nuclear medicine).

Harmen is the author and co-author of approximately 75 scientific articles, reports and specialist publications. He has also been involved in EU projects in the 5th, 6th and 7th framework programmes, as principal investigator and work package leader. He is a radiation expert (level 3) and was a member of the Belgian delegation of the United Nations Scientific Committee on the Effects of Atomic Radiation (UNSCEAR) for eight years.

Harmen Bijwaard has been chair Medical Technology at Inholland University of Applied Sciences since March 2013 (see https://www.inholland.nl/onderzoek/medische-technologie/). His focus areas are medical imaging, radiotherapy and ICT in healthcare (e-health). He combines his post as lecturer with a position as project coordinator / senior researcher in Medical Radiation Applications at the Centre for Safety at the National Institute for Public Health and the Environment (RIVM).