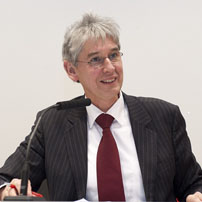 Sustainability means to me: a call for coherence and having an eye for different interests and perspectives. How sustainable or future-proof are policy plans? What are the uncertainties and possible surprises? RIVM is very well placed to contribute to sustainability by establishing cross-connections and looking for robust solutions from different perspectives. The combination of nutrition, health and environment is unique.

Rob Maas studied economics at Erasmus University Rotterdam and from 1973 to 1983 he worked at the Netherlands Economic Institute, e.g. modelling work for the government plan on ‘selective economic growth’.

During this period, Rob Maas also contributed to several European and global outlook reports and developing the international role of RIVM. RIVM became responsible for the European Thematic Centre on Air and Climate and the Technical Support Unit of Working Group 3 (Integrated Assessment) of the International Panel on Climate Change. Thanks to the models developed at RIVM connecting sources to effects, RIVM was given an important role in developing European and global scenarios for the future by, among others, the European Commission, the World Bank, the Organisation for Economic Co-operation and Development (OECD) and the United Nations Environment Programme (UNEP).

After 2006, in his capacity as the head of the Air and European Sustainability centre, he mainly focused on supporting European environmental policies. At the time of the split in 2008, this centre was a part of the PBL Netherlands Environmental Assessment Agency, but became a part of RIVM again on 1 January 2011. Since 2013, in his capacity as a senior scientific advisor, he has been promoting coherence in RIVM research and policy advice.

As chair of the United Nations Task Force on Integrated Assessment Modelling Rob Maas has been involved since 1994 in co-ordinating and integrating the scientific knowledge necessary to support policies to reduce transboundary air pollution. In that capacity he studies air pollution, climate change, resource depletion and loss of biodiversity in connection with developments in energy consumption, mobility and food supply.