Every week, RIVM conducts laboratory research on a random sampling of test samples. In this research, all the building blocks of the genetic material from the virus (RNA) are mapped. This is called sequence analysis. This technique makes it possible to examine the building blocks of the virus and compare them to those of other samples. This shows whether the virus is changing and how, and to determine if extra vigilance is necessary for certain variants. We can also see how different strains of the virus are related and how the different variants are spreading. This is known as phylogenetic research.

Working together and sharing knowledge

RIVM is collaborating with Erasmus MC and other laboratories throughout the country on these research efforts. The laboratories submit a random sampling of test samples for research purposes every week. RIVM has been doing these analyses since the beginning of the epidemic. By now, this involves about 400 samples every week. In the near future, this number will be increased to about 1200-1500 samples per week. Laboratory research takes more time and is more complicated than analysing a sample for a PCR test, for example. Various specialists are involved in the research. 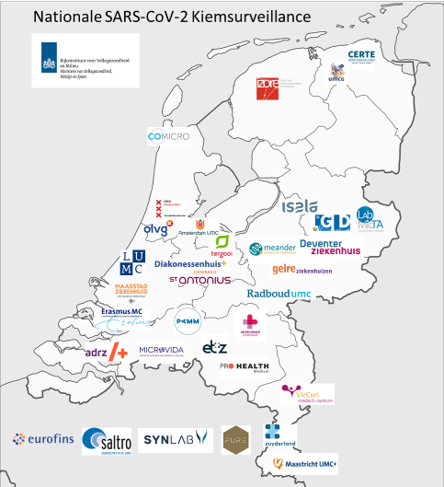 The data from the laboratory research provides valuable information on the different variants of the virus, their characteristics and the spread of the variants. With this information, RIVM can use mathematical models to predict the course of the epidemic and the effects of measures. In addition, this information is valuable to experts all around the world. For that reason, data is collected and shared in an international database. RIVM also belongs to international expert groups that monitor the evolution of the coronavirus SARS-CoV-2. This allows experts at research institutes and international organisations such as the ECDC and WHO, for example, to have access to the same data around the world. This is reciprocal: RIVM obtains information from this international network about variants of the virus that have not yet been detected in the Netherlands, but may well emerge.

Variants of the virus

It is estimated that there are thousands of variants of the coronavirus SARS-CoV-2 by now. Different variants of the virus have been circulating in the Netherlands since spring of 2020. The fact that there are different variants of the virus is not new. The main focus is whether the variants that are circulating also have new characteristics that pose additional risks. For example if they are more easily transmitted, make people more ill, or do not respond as well to vaccination. A growing number of SARS-CoV-2 variants are currently being monitored and researched worldwide: from the United Kingdom, South Africa and Brazil.

How do we measure the percentage of a variant in pathogen surveillance?

Every week, RIVM analyses a random sampling of 1,000 test samples from positive PCR tests that were taken across the country. In this research (known as pathogen surveillance), all the building blocks of the genetic material from the virus (RNA) are mapped. This is called sequence analysis. By looking at the RNA, it is possible to see whether a new variant of the virus has emerged and approximately how often it occurred. By doing so, we can determine if extra vigilance is necessary for certain variants.

How do we calculate percentages of a variant in the infection figures?

For example, look at the calculations for the UK variant from January 2021. First we want to know how many of the 1,000 test samples that are analysed every week in the context of pathogen surveillance involved the UK variant, the South African variant, or a new variant.

Then we move on to the next step: modelling. Based on the data from the first step, the models we use calculate how quickly the numbers of different virus variants are increasing. The speed at which a variant increases has a predictive value for the future. This is the basis that we can use to create a model. That will make it possible for us to estimate percentages of a variant in the future. New data comes in every week, which we check against this projected forecast. Based on the latest data, we adjust the forecast as needed. This makes the estimates more reliable over time. This is reflected in the modelled forecasts for the UK variant between 12 January and 5 February 2021, as shown on this page. The red line is our estimate. The pink band around it shows the uncertainty. This was a prediction that was later updated by adding the actual number of reported infections. The black dots are the actual numbers from the sequence analyses. As you can see, the calculations are constantly being adjusted slightly on the basis of the most recent data. The pink band, which indicates uncertainty, becomes narrower and narrower; the estimates are becoming more reliable.

We know when these samples were taken, and the model describes what percentage of all samples taken involved the UK variant on any given day. To calculate the R number, we need to know this percentage for all people who had their first day of illness according to the daily reports from the Municipal Public Health Services (GGDs). We know that there is an average of about five days between the first day of illness and the date of testing. This allows us to estimate how many people must have been infected with which variant each day.

Overview of COVID-19 research in the Netherlands