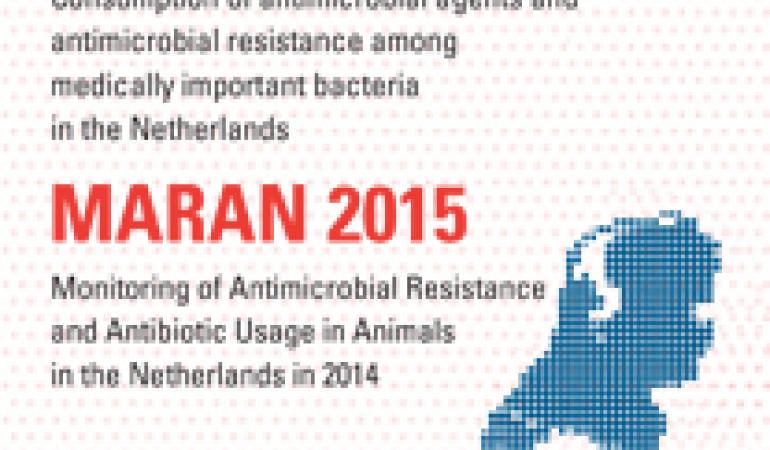 Over recent years, antibiotic resistance to most agents has remained stable in the Netherlands, and the use of antibiotics has slightly decreased. Yet there is reason for concern, because an increasing number of bacteria that can cause infections in human beings are shown to be resistant to antibiotics that are used as a last resort, thus making the choice for an antibiotic that works properly an increasingly difficult one. After years of considerable decrease, the use of antibiotics for animals has hardly declined in 2014.

The use of antibiotics

The use of ‘last resorts’ is increasing

In 2014, resistance percentages for most antibiotics have not increased. Yet there is concern that a growing number of bacteria are becoming resistant. Resistance has shown to have increased among the agents used; hospitals make increasing use of carpabenem antibiotics, which are among the ‘last resorts’, for vulnerable patients. In order to combat the development of resistance, policy concerning antibiotics should be adapted to a greater extent to individual patients and infection. It is important for caregivers to carefully comply with hygiene and infection prevention measures to prevent the spread of resistant bacteria.

In 2014, the decrease in use of antibiotics in livestock levelled off, with the exception of dairy cattle and broiler chickens. A distinctive decrease in use was still seen among dairy cattle. The use among broiler chickens increased in 2014, although the decrease in this sector is still the largest of any animal species since 2009. Cephalosporins and fluoroquinolones, of importance to humans, have been used in cattle farms on an occasional basis. Also new is that the prescription pattern of antibiotics by vets has been mapped out, thus allowing for the monitoring and benchmarking of vets. The decrease in use among animals has contributed to a decrease in resistance among animals and animal products. Another decrease was shown in the incidence of ESBLs, which may be important for human beings because these ESBLs can cause infections among humans. The decrease in resistance seemed to level off in 2014. In order to prevent a further reduction of ESBLs incidence in cattle farms, further sector-specific policy is required.

The NethMap/MARAN report was formulated by the Dutch Working Party on Antibiotic Policy (SWAB), Centre for Infectious Disease Control of RIVM, Central Veterinary Institute (CVI), department of Wageningen UR, the Netherlands Food and Consumer Products Safety Authority; NVWA and the Netherlands Veterinary Medicines Authority; SDa. This year NethMap will be published for the thirteenth time. This is the fourth time that this  information concerning humans from the NethMap is to be presented along with the veterinary information from MARAN. MARAN has monitored the use of and resistance to antibiotics in the animal sector since 1998.