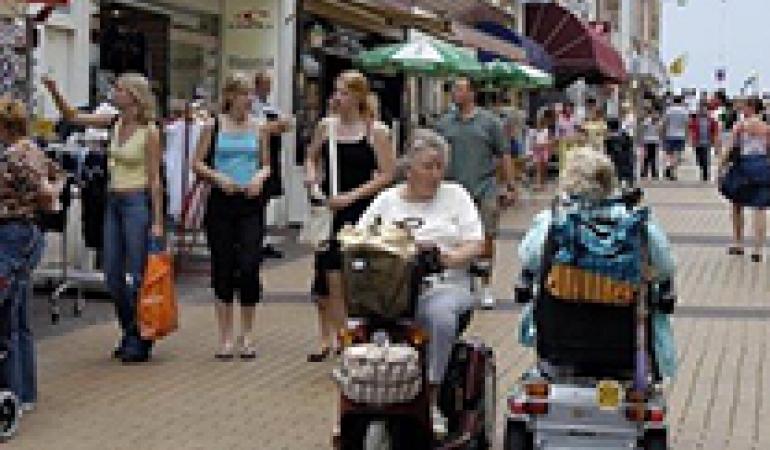 In 2011, 19.6 billion euros was spent on the treatment of mental disorders. This amounted to 22% of the total expenditure on health and welfare during that year. With an expenditure of 8.3 million euros, cardiovascular diseases took second place. These figures were taken from the latest Cost of Illness in the Netherlands study (www.costofillness.nl), which was published by the National Institute for Public Health and the Environment (RIVM) today.

In this four-year study, RIVM classifies total Dutch healthcare spending by illness, age and gender, with the aid of usage data from care registers, and based on figures for health expenditure provided by Statistics Netherlands. According to Statistics Netherlands, total expenditure on healthcare and welfare in 2011 amounted to 89 billion euros. This includes all medical health expenditure, both collectively funded healthcare paid for from the Ministry of Health, Welfare and Sport’s budget (basic healthcare insurance, Exceptional Medical Expenses Act (AWBZ)) and privately funded care (supplementary insurance, personal payments), as well as spending by other government bodies, members of the public, and businesses. The figures include neither the costs of informal care nor indirect healthcare costs (e.g. due to absenteeism).  Some of the welfare expenditure included in Statistics Netherlands’ healthcare calculations (a total of 12.8 billion euros) is not disease related. Some examples of this are the cost of child care and part of the accommodation costs involved in caring for the elderly and the disabled. These are not assigned to a specific disease.

Increase of 4.7 per cent per year

Relative to 2007, the cost of illness has risen by an average of 4.7% per year. Almost a quarter of this growth can be ascribed to the growth and ageing of the population resulting from increased life expectancy, while a further 16% is due to higher prices, salaries and fees. The remaining portion (60%) is due to increased numbers of patients on the one hand and to the on-going development of medical technology on the other. These are averages, so this distribution can vary from one disease to another.

The cost of cancer, diseases of the nervous system, and metabolic disorders has risen relatively rapidly.  These are diseases that mainly occur in the elderly. As a result, an ageing population and increasing life expectancy are having a greater impact on health expenditure in these areas than in other diseases. Furthermore, in recent years many new, relatively expensive drugs have become available for the treatment of diseases in these groups. These drugs are now in widespread therapeutic use. The increased life expectancy of patients with diseases in these groups has also imposed greater demands on home care as well. Part of the increase for these diseases between 2007 and 2011 results from the improved allocation of outpatient care and diagnostic procedures (scans, etc.) within the study. With regard to metabolic diseases, the advent of integrated care for diabetes has had an impact, as it leads to increased spending in the short term.

The disease that involved the highest expenditure in 2011 (6.8 billion euros) was “mental retardation”, which is part of the main “mental disorders” group. This is mainly because some members of this group live in institutions, and the associated accommodation costs are included. The same applies to the second most expensive disease, “dementia”, which involves an expenditure of 4.8 billion euros. This is also a disease that occurs mainly in extreme old age, and rising life expectancy has resulted in a sharp increase in the number of very elderly people in the population. In third place are symptomatic symptoms (coughs, chest pain, etc.) for which no diagnosis has been made (or not yet made). In 2001, the costs incurred by this group (3.6 billion) fell, due to the improved registration of diagnoses in hospital outpatient care. (See Table 2).

In 2011, men incurred average individual healthcare costs of 4,760 euros, while the equivalent figure for women was 5,760 euros. The difference is largely explained by the fact that the costs of pregnancy are allocated to women, and because women live longer.
Per capita costs are highest for newborns and the elderly (see Figure 1). The high costs for newborns result from the care associated with childbirth, while the fact that elderly individuals often suffer from multiple disorders accounts for the expenditure in this group.  Another factor, in the case of very elderly people is that relatively large numbers of them live in institutions, so their accommodation costs (part of the Exceptional Medical Expenses Act) are included in health expenditure.
One particularly striking fact is that, in the period from 2007 to 2011, the per capita cost for young people rose faster than that for the elderly. The average increase for those above the age of 65 was 2%, while the corresponding figure for those below this age was 5%.
You can find further details at: http://www.kostenvanziekten.nl/systeem/service-menu-rechts/english. This website has an English language section which uses the  OECD-definition of costs (System of Health Accounts), intended for international comparisons, which excludes some of the costs included in our national health accounts.  It is also possible to download all information as a relational database. All of the information that can be downloaded through this website is “open data”. 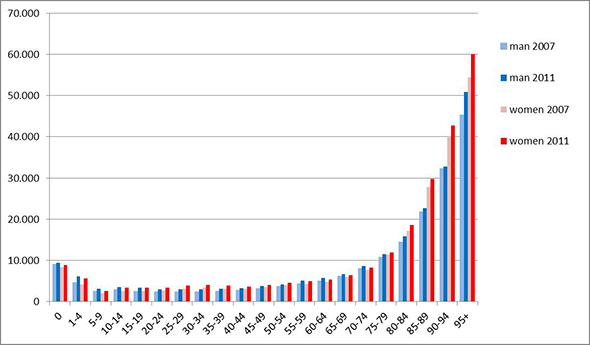