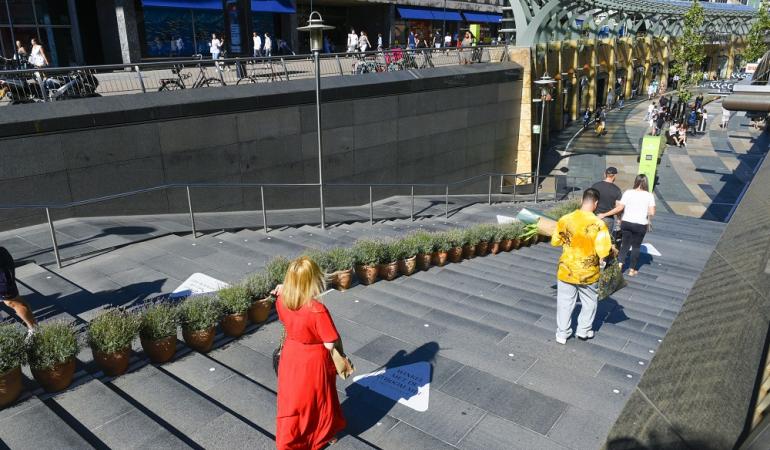 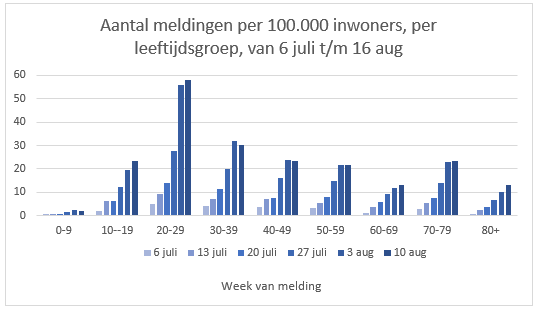 Hospital admissions (current or previous) due to COVID-19 were reported during the past week for 50 patients. That is 12 more than last week, an increase of 32%. Although there has been a greater increase in the number of infections among younger age groups than among the elderly, there has not been any shift in age structure in hospital admissions over the last 6 weeks. Just as in March, April and May, approximately 70% of COVID-19 patients admitted to hospital in the past 6 weeks are 60 years or older. See Figure 2. 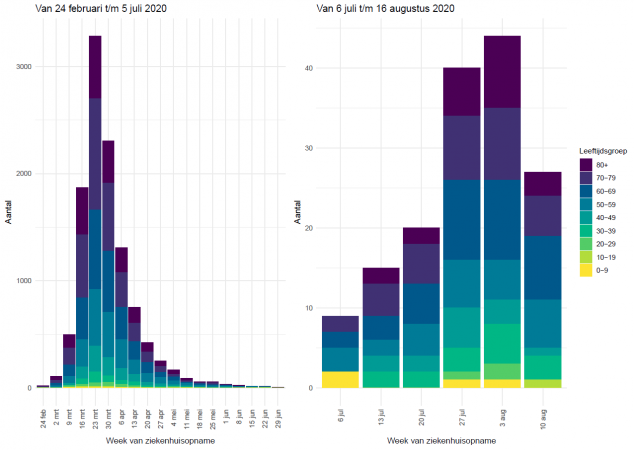 16 deaths of laboratory-confirmed COVID-19 patients were reported, 7 more than the week before.

Percentage of positive tests this week is 3.5%

Between 10 and 16 August, the number of people tested at the GGD test sites was 102,487*, an increase of about 3,500 people tested compared to the previous week. Of the people who were tested last week and whose test results are now known, 3.5% tested positive for COVID-19. That percentage was 3.6% in the week of 3 August. The percentage of positive tests was about the same as last week in most regions. The highest percentage of positive tests (4%-8%) was seen in the GGD regions of Rotterdam-Rijnmond, Amsterdam, Haaglanden, West-Brabant, and Zuid-Holland-Zuid. These are also the regions where most of the known clusters are located.

There are currently 438 known active COVID-19 clusters in the Netherlands. That is 59 more than the week before. A cluster consists of three or more related infections. Over the past week, the average size of these clusters was 5.6 people (range: 3-45). Most clusters have been reported within the home (155), where the size of the clusters ranged from 3 to 19 people. This is followed by the infections through contact with family members and friends and at parties, in the workplace, in nursing homes, and during holidays.

Due to the increasing number of confirmed COVID-19 cases being reported, since the first week of August (week 32), some GGD regions that are receiving many reports are no longer individually entering all contacts in the registration system. For this reason, some of the results of the source and contact tracing are presented in the epidemiological report up to week 31.