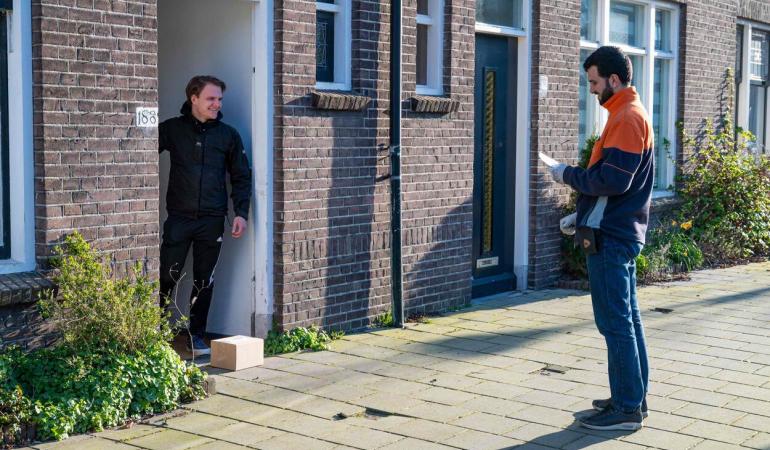 3,588 new COVID-19 infections were reported last week. That is 425 fewer confirmed cases reported than the week before that.

Percentage of positive tests this week is 2.5%

Since 1 June, the municipal public health services (GGDs) have tested more than 1 million people for COVID-19 in the GGD test lanes. Between 17 and 23 August, the number of people tested at the GGD test sites was 140,432*, an increase of nearly 38,000 people tested compared to the previous week. Of the people who were tested last week and whose test results are now known, 2.5% tested positive for COVID-19. That percentage was 3.5% in the week of 10 August. The percentage of positive tests decreased compared to last week in most regions. The highest percentage of positive tests (4-5%) was seen in the GGD regions of Rotterdam-Rijnmond, Amsterdam, and Haaglanden.

In nearly all age groups, a slight decrease or stabilisation was observed in the number of positive tests reported per 100,000 inhabitants (see Figure). 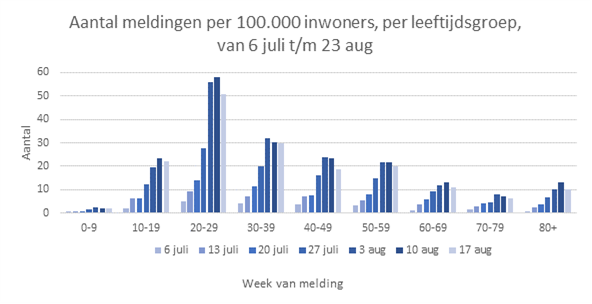 26 patients were admitted to intensive care due to COVID-19 last week, compared to 28 IC admissions in the week before, as reported by the National Intensive Care Evaluation Foundation (NICE).

32 deaths of COVID-19 patients were reported in the past week. This represents an increase of 16 deaths compared to the week before. Not all of the reported deaths occurred within the last week.

Starting next week, RIVM will be including the figures recorded by the National Intensive Care Evaluation Foundation (NICE) in its reporting. During this phase of the epidemic, the figures from NICE provide the most up-to-date overview of the number of hospitalisations. Hospitals record data on COVID-19 patients in nursing wards and intensive care units for NICE on a daily basis.

Since March 2020, RIVM has been announcing the number of hospitalisations based on reports from the municipal public health services (GGDs). In March through May, these figures provided a good overview of the number of hospitalisations. Until 1 June, COVID-19 tests were primarily administered to people who were seriously ill, and many of them were already in hospital or were hospitalised shortly after the test. Since 1 June, everyone can get tested for COVID-19, and many more people are tested in an early stage of the disease. If people are later admitted to hospital in the weeks after their confirmed infection, their hospitalisation is not always reported to the GGDs. In addition, hospital admissions are often reported to the GGDs with some delay, whereas the NICE figures are updated daily.