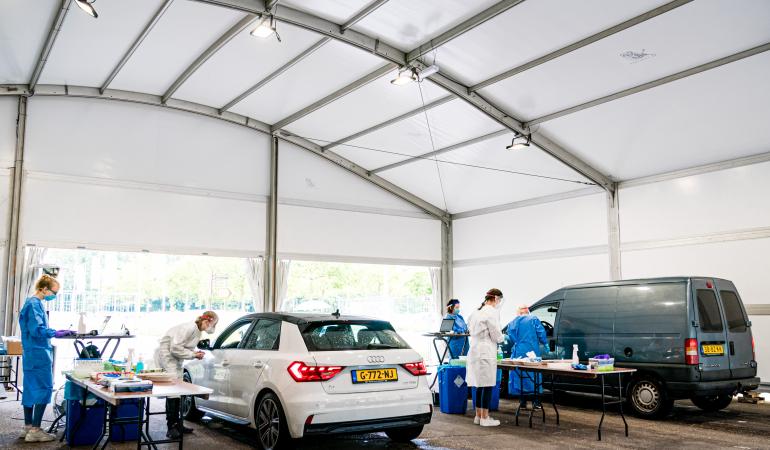 55,587 new COVID-19 cases were reported last week, an increase of nearly 12,000 (27%) compared to the week before. All age groups showed an increase in the number of people who tested positive for COVID-19. However, the difference between the number of newly reported infections in younger and older age groups is growing smaller (see Figure 1). The number of newly reported infections seems to be increasing less rapidly than the week before. This could be an effect of the measures implemented from late September on. We will be able to see next week if this trend continues.

The number of hospital admissions continues to rise at the same pace. Last week, the NICE Foundation reported 1492 new admissions related to COVID-19 in the nursing wards and 287 new admissions to intensive care.

185 deaths due to COVID-19 were reported last week by the Municipal Public Health Service (GGD), compared to 173 last week. Over 90% of the people who died in the past week were aged 70 years or older. Last week, 150 more people died than expected based on figures from previous years (excess mortality), and there were 200 more deaths than expected in the week before that (Figure 2). Statistics Netherlands (CBS) reported these figures Friday in a press release about excess mortality.

Figure 2: Total mortality in the Netherlands up to 7 October. The observed mortality is compared to the number of deaths expected on the basis of previous years. The yellow band on the graph shows the mortality rate that would be expected at that time of year. Within two weeks, nearly 97% of all deaths are known to Statistics Netherlands.

In the week of 5 - 11 October, 311,188 people* were tested in the GGD test lanes, over 30,000 people more than in the week before. The test results for 269,753 people are known. 38,859 of those people tested positive for COVID-19. As a result, the percentage of positive tests rose to 14.4%. In some GGD regions, as many as 1 in 5 people tested positive for COVID-19. The highest percentages were observed in the GGD regions of Rotterdam-Rijnmond, Twente, and Zaanstreek-Waterland. It is still important to get tested, and not to assume that you just have a ‘cold-weather cough’ or ‘autumn sniffle’ if you develop symptoms that could indicate COVID-19.

To prevent the virus from continuing to spread, it is important for everyone to comply with the measures. Keep your distance. Work from home. If you have symptoms, stay home and get tested. Wash your hands frequently, and in any case when you arrive at home. Sneeze and cough into your elbow.

RIVM publishes a weekly overview of the number of infections, hospital admissions and ICU admissions, and people who have died from the consequences of COVID-19 in the Netherlands. Daily figures (which are corrected for later updates in some media, and not in others) may fluctuate dramatically as delayed reports come in, and are therefore less suitable for monitoring the course of the epidemic.