Plastics are synthetic substances that are composed of long molecular chains (polymers) that originate primarily in the petrochemical industry. The most commonly produced plastics are polypropylene (e.g. drinking straws), polyvinyl chloride (PVC e.g. building materials), polyethylene (e.g. plastic bags), and polystyrene (e.g. disposable cups/chips containers). Microplastics are smaller than 5 mm6. Plastics that are smaller than 0.1 micrometres (< 100 nm) are often also called nanoplastics. Microplastics are disposed of directly into the environment or they can end up in the environment due to the degradation of larger pieces of plastic. It takes decades for larger pieces of plastic to break down into microplastics. The rule of thumb is that the smaller a particle is, the more easily it can be absorbed by humans and animals.

Plastics are really everywhere. They are present in the form of hard plastics such as can be found in the dashboard of your car or your mobile phone, or in the form of soft plastics such as can be found in plastic shopping bags, drinking straws, or the plastic packaging around vegetables in the supermarket. No equivalent replacements (yet) exist for some applications. Examples of such applications include certain home insulation materials and all kinds of medical applications such as examination gloves, sterile syringes, blood bags, and heart valves. In addition, new and innovative applications are continually being developed such as a heart made of plastic materials, bacteria-resistant plastics, and body parts that can be made using a 3D printer.

Plastics are cheap and easy to produce in enormous quantities, so they are the obvious option for a great many applications. It is estimated that over 400 million tons of plastics are produced worldwide each year, half of which becomes waste within 4 years. Since the 1950s, when large-scale production of plastics first started, more than 8 billion tons have been produced. More than 6 billion tons of this production have already been thrown away. Of this plastic waste, 79% ended up in rubbish dumps or in nature, and 12% was incinerated1. Only 9% was recycled. After all, once it has been used, plastic has very little value.

Debate regarding the environmental damage of plastics

There is a great deal of debate about the use of disposable plastics. Single-use  plastic carrying bags are forbidden in the Netherlands. One of the reasons behind this measure is that single-use plastic carrying bags end up in the environment and then “migrate” elsewhere. As a result, they end up in places where we do not want them, such as nature areas. Plastic shopping bags are often used once only in supermarkets. The goal is to replace them with more environmentally friendly materials. However, a Danish study2 concluded that the purchase of (environmentally friendly) cotton bags can actually be more harmful to the environment depending on how often the bag is used.

Concerns with regard to plastics

There are still many open questions regarding the effects of these plastics on organisms living in the water and soil. It is also still not clear whether plastics affect human health. However, we do know that plastics are broken down only very slowly (persistent) in the environment, and that it takes decades or even longer before a disposable plastic bag or plastic drink bottle is degraded. Furthermore, this process of degradation results in the formation of smaller plastic particles that are more harmful than the original plastics. Biodegradable plastics also do not yet provide a safe alternative for conventional plastics.

People are becoming increasingly concerned as a result of the enormous quantities of plastics in circulation and the existing uncertainties regarding their safety for people and the environment. We do not want to have persistent substances in the environment or plastics in our foods or drinks. Government bodies as well as all kinds of interest groups advocate reducing the use of plastics and replacing them by more environmentally friendly alternatives. For example, at the European level, efforts are underway to restrict the use of microplastics in products that are marketed in Europe. As a result, during the next 20 years3 the quantity of microplastics released into the environment would be reduced by 500,000 tons, which is less than 4% of the total amount used in Europe. The Netherlands wishes to achieve a safe and sustainable use of plastics by recycling more plastics in the circular economy and using plastics only if there are no other alternatives.

Some of the uncertainties regarding plastics in the environment are summarised in the article ‘Misunderstandings regarding the plastics soup’. Until now it was assumed that microplastics were too big to be absorbed by plants and therefore end up in our food chain. This was based on the idea that they could not penetrate the pores of plant roots. However, as it turns out, this is possible (at least in the case of salad and wheat plants)5. See image. 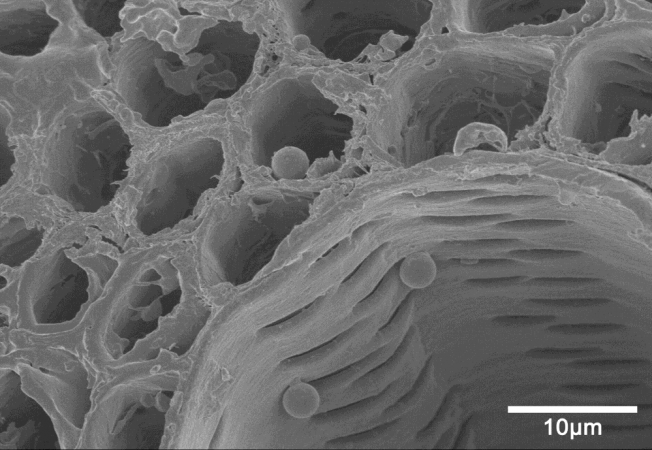 Polystyrene microplastics (size 2 µ) in the roots (xylem cells) of a wheat plant5.

Researchers are not in agreement with regard to the effects of plastics in the environment: environmental effects are possible, but these effects become visible only at (unrealistically) high concentrations of plastics. Effects on the ecosystem in the oceans would then become clearly observable in 21004.

Misconceptions with regard to plastics in the environment

The misconception with regard to plastics in the environment distract attention from what is needed to tackle the problem at the source. In addition, various myths lead to actions that constitute only a drop in the ocean:

The big question is whether the benefits of plastics outweigh the drawbacks (persistent pollution with potential impact on humans and the environment). This question does not have to be answered before taking action to tackle the issue of plastic. After all, it’s becoming increasingly clear that we should not burden the coming generations with substances that persist in the environment for a very long time. We have produced these in such large quantities that they can have an effect on humans and the environment. It is difficult to avoid plastics altogether. It is however clear that everyone can help in keeping the quantity as small as possible. In particular by dealing with them as carefully as possible and using them only if it is really necessary. The alternatives must, however, be carefully considered to see whether they are better options in terms of being more environmentally friendly.

Based on: W. Peijnenburg. Plastics in our living environment – what is the present situation? Bodem-Tijdschrift voor Duurzaam Bodembeheer (Soil - Magazine for Sustainable Soil Management) 2020: 30 (5): 12-3.