Imagine: a doctor by the bed of a patient in an African regional hospital analyses on the spot the genome of certain pathogenic organisms in the blood of the patient using a convenient device. By sending this information to a gigantic databank, the doctor can quickly receive an answer to the question of what is wrong with this patient. Does the disease resemble an outbreak elsewhere? Is the pathogen resistant to certain antibiotics or antiviral agents? If so, the patient can be treated very specifically, with other antibiotics. This concept could be a reality in about a decade. 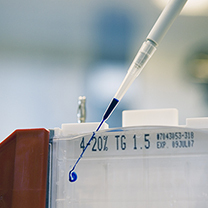 The technique that is expected to make this possible in the future is called Next Generation Sequencing. It is developing worldwide and used to map the DNA or RNA sequence of the entire genome of a microorganism. ‘It is comparable to a fingerprint, but of viruses and bacteria instead’, according to virologist Marion Koopmans of the Centre for Infectious Disease Control of the RIVM, and professor of Virology at Erasmus University Rotterdam. ‘Twenty years ago, it took a year to map one genome, and it is expected that this can be reduced to one single day by the push of the button, and very inexpensive. If this technique really does what it is expected to do, it will be revolutionary, allowing the examination of the inside of pathogens. All existing pathogens are studied instead of just the ones you know; an incredible progress for diagnostics.’ Currently, the broad applicability and public accessibility of Next Generation Sequencing is still limited. Therefore, scientists, policymakers and researchers worldwide joined forces in the Global Microbial Identifier (GMI) think tank, and engaged in studying pieces of puzzles in their own areas of expertise, such as veterinary and human research, public health, IT and food safety.

Koopmans and her colleague George Haringhuizen, a public health lawyer, have been involved in the GMI from the start. ‘RIVM was asked to join in this project because of its expertise in the area of international collaboration in viral infections and food safety’, says Koopmans. ‘We are studying how we can deploy the new DNA/RNA analysis technique for the benefit of public health. Can we use this to show the prevalence of important pathogenic organisms in humans, animals and food? Will we be able to detect an (impending) outbreak of an infection faster? How can we standardise the study of samples of different origins and what viruses and bacteria from our collection deserve to be included in a reference bank? Think for example of influenza, avian influenza, noroviruses, hepatitis A or E. coli bacteria and the resistant MRSA Methicillin-resistant Staphylococcus aureus (Methicillin-resistant Staphylococcus aureus ) bacteria.’

But also elsewhere scientists are working under the GMI umbrella, investigating  different pieces of the puzzle and sharing their knowledge. With the support of the Food and Drug Administration, the University of California/Davis collects pathogenic microorganisms from all over the world, including the Netherlands, for the so called ‘100,000 genomes project’.  The ‘mother of all databases’, in which the entire composition of the genome of all pathogenic microorganisms will be stored, has not been realised as yet. It will probably  end up as a network of various large databases. ‘GMI is focusing on achieving worldwide standardisation and quality agreements.’

There are many considerations to be covered when sharing data out of Next Generation Sequencing, such as international, technical and legal matters, according to Haringhuizen. The availability of information and traceability of data to institutions and companies (that have produced contaminated food, for instance) are just a few hurdles. ‘It is important for public health that information about pathogenic organisms is immediately available in order to allow governments to take measures in the event of an outbreak. Currently for instance, research data are generally not released until after scientific publication or after a patent application. These issues can be overcome by earmarking relevant information so it can be used in the case of an outbreak.’ Haringhuizen does not believe that the privacy of patients is an issue when using a mega databank. ‘Effective regulation in all countries see  already to it that information about pathogens cannot be traced back to individuals, but pathogens in food, for instance, can be traced back to manufacturers. The good side of this is that you can confirm or exclude suspected relationships between illnesses and products, but the disadvantage is that production information can also be deduced and this is not what companies want. We are investigating when data should or should not be protected. If company names are coded by an independent third party, the publication of manufacturers can be limited to situations in which public health is in danger. But this also requires proper global management.’