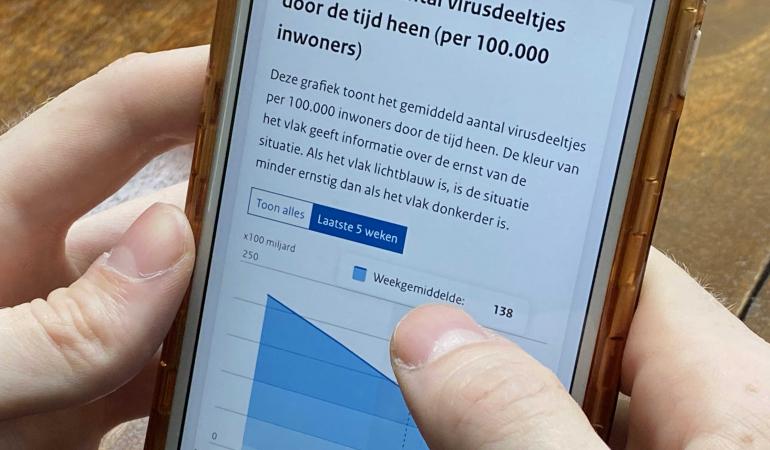 This week, early indicators were added to the sewage measurements page on the Coronavirus Dashboard provided by the national government. These values help to clarify the measurements by indicating how serious the situation is.

RIVM has been examining the sewage for virus particles ever since the first outbreak of the coronavirus SARS-CoV-2 in the Netherlands (March 2020). Since September 2020, all of the over 300 sewage treatment plants in the Netherlands have been involved, examining the sewage of virtually every Dutch household (over 17 million people). Based on the knowledge acquired since September 2020, RIVM has now developed target levels for early indicators. These levels were confirmed by the Outbreak Management Team (OMT) on 28 May. The OMT advised as follows: “Surveillance of sewage can indicate an increase in incidence in a region, even if testing becomes less frequent in the future. Sewage surveillance is an effective way to determine circulation of the virus, enabling us to monitor the spread.” *

As of this week, the early indicators will be published on the sewage page of the Coronavirus Dashboard. The charts will be colour-coded (ranging from light blue to dark blue) to indicate how serious the situation is. The darker the blue, the more serious the situation. A downward trend in the number of virus particles in sewage has been observed from mid-April on, and this trend has remained steady.

The new early indicators for sewage measurements, indicated in different shades of blue, are still under development.  RIVM developed these early indicators based on analyses of the second wave (from September 2020 on). RIVM will continue to monitor these levels and other early indicators, such as positive COVID-19 tests, and assess whether they still suffice in a new phase of the pandemic. Once the levels have been finalised, they can play their part as early indicators to help determine the seriousness of the situation in a region, in addition to the early indicators for positive tests and hospital admissions.

Keeping track of the virus

Sewage surveillance is one of the ways to monitor the spread of the coronavirus SARS-CoV-2. It is crucial that we maintain an overview of the coronavirus, especially now that more and more people are being vaccinated, testing will probably be less frequent, and we appear to be slowly gaining control of the virus. RIVM, the Ministry of Health, Welfare and Sport (VWS) and the Dutch regional water boards have therefore agreed to continue sewage surveillance for COVID-19 in the coming years, expanding current efforts by analysing even more samples per week.

Sewage surveillance enables early detection in the event of a new, localised outbreak. New variants can also be identified and traced.  Since RIVM stores the sewage samples, it will also be possible to check whether a specific variant was already present in the Netherlands earlier on. In addition, a model has been developed to help use the sewage data to predict hospital admissions.