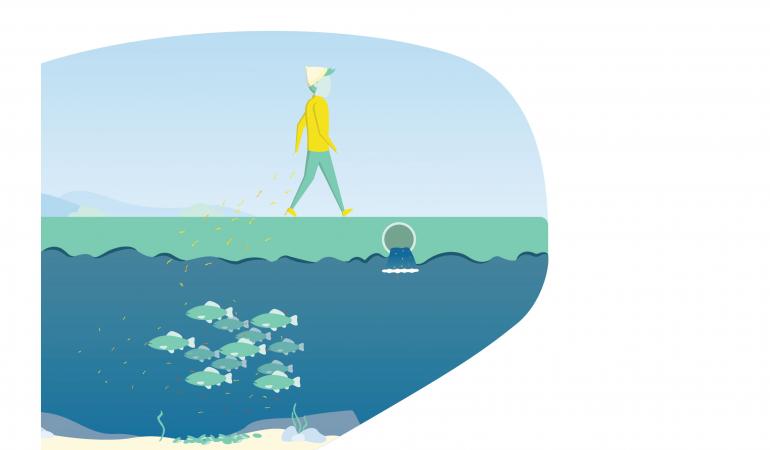 When garments made from synthetic materials wear, due to use and washing, microplastic fibres are released. Wastewater treatment plants remove 50 to 90 per cent of these microplastic fibres. The remainder is discharged into the surface water where they can have damaging effects on the organisms present. RIVM provides perspectives for action to reduce the quantity of microplastic that enters the water via clothing.

Organisms ingest microplastic fibres via the surface water and pass them on to larger aquatic animals in the food chain. The fibres can disrupt their digestion, cause inflammation and stunt growth. The production and use of clothing also causes microplastic fibres to be released, for example into the air, thus resulting in their further spread throughout the environment. The effect of microplastics in our food and the environment is not fully known yet but, at the very least, they do not belong there.

All parties involved with textiles can take measures: producers, consumers, washing machine manufacturers and wastewater treatments. This is necessary − and feasible, if all the parties involved do their bit.

Fewer fibres
Textile and clothing manufacturers can, for example, develop and use materials that release fewer microplastic fibres. They can also maximise their use of sustainable, environmental-friendly materials and avoid using fleece.

Consumers can contribute to the reduction of microplastics in the environment by not washing clothing more often than necessary, by using liquid laundry detergents and by washing at low temperatures. It is also recommended that filters in washing machines and tumble dryers not be rinsed under the tap but be cleaned by hand or vacuum cleaner and that the contents be disposed of in the residual waste. Instructions in user manuals must be revised accordingly.

Washing machine manufacturers can develop filters for the machines they produce. The government can increase the attention paid to microplastic fibres in European legislation, for example by obligating microplastic filters in washing machines. It can also promote innovation in the broader sense by granting subsidies.

Around 70 per cent of the textile fibres produced globally are made from synthetic materials.