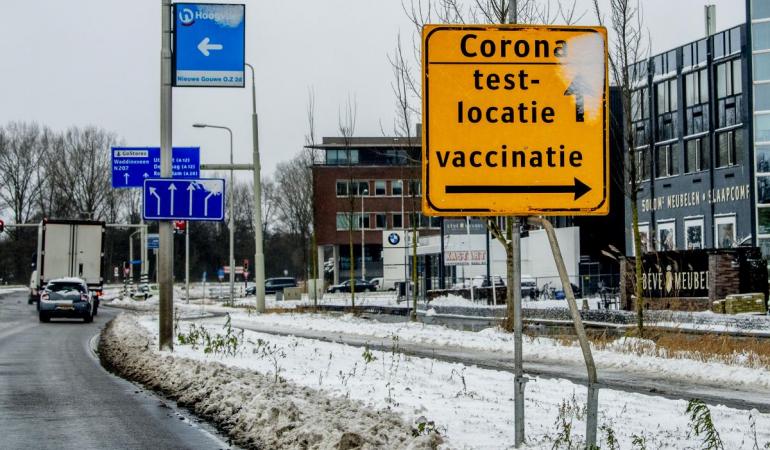 In the period from 3 to 9 February, the reported number of people who tested positive for COVID-19 in the Netherlands was 24,668. There were fewer reported positive tests, but the number only decreased by 14%, which was a smaller decrease than in recent weeks. The reproduction number for 22 January dropped to 0.91 (0.88–0.93). This puts the R number below 1, which is in line with the downward trend that we saw in the reported figures in recent weeks. However, an increasingly high percentage of the people who tested positive are infected with the more contagious UK variant.

Decrease in number of tests

The number of people being tested has decreased. In the past calendar week, 195,086 people were tested (compared to 208,275 in the previous week). GGD test sites were closed last Sunday due to the winter weather conditions. There was also less testing on Monday. Of the people who were tested, the percentage who tested positive for COVID-19 did decrease slightly in the past week, dropping from 11.4% in the week of 3 to 9 February to 10.7% last week.

In all age groups over 12 years, the number of newly reported infections was lower in the past week compared to the week before. Since last Wednesday, source and contact tracing at schools and in childcare follows the same procedures as source and contact tracing for adults. For children aged 4-12 years who attend primary school, the policy on staying home and getting tested has been changed since yesterday, and is now the same as the policy for older children in secondary school and for adults. If they have any symptoms that could indicate COVID-19, they must stay home and get tested.
Due to new policy on source and contact tracing, there was a slight increase in the number of young children tested last week, and also in the number of reports of positive test results (see Figure 1). Now that the primary schools have reopened, these numbers may continue to rise in the younger age groups in the coming weeks.

Four new variants of the coronavirus SARS-CoV-2 have been found in the Netherlands. This concerns the variants that have been referred to as the UK variant and the South Africa variant, as well as two Brazilian variants.

Figure 2 shows the upward trend of the UK variant compared to the old variants since the beginning of December. The chart shows the first day of illness for people who tested positive for COVID-19. The red part of the bars indicates the number of people with the UK variant. On average, people were infected with the coronavirus SARS-CoV-2 five days before they developed symptoms.

Not everyone is tested for which variant of the coronavirus they have. The ratio of the UK variant to the other variants in this figure is calculated using research data from pathogen surveillance. Every week, RIVM researchers receive more data on the infections that are included in these modelling curves. This additional data often incorporates older reports as well. As more and more data from pathogen surveillance are added, previous estimates may change. The more data that becomes available, the more accurate the estimates will be.

Figure 2: Modelled number of infections with the old variant and UK variant, from 1 December 2020 to 5 February 2021 based on first day of illness.

The ‘South Africa variant’ has been found more and more often in the Netherlands: 6 times during pathogen surveillance and 34 times in source and contact tracing.

During pathogen surveillance and source and contact tracing, two new variants of the coronavirus SARS-CoV-2 have been found in the Netherlands, both originating from Brazil: the P1 and P2 variants. The P1 variant has been confirmed in 2 people who recently visited Brazil. In addition, the P1 variant was found once in the random samples during pathogen surveillance. This person had no travel history. GGD Gelderland-Zuid is currently conducting further investigation. The P2 variant was found in two people, two with no history of travel to the South American country; the P2 variant was also found in a third person had recently been to Brazil.

Our behaviour can protect ourselves and others against the virus. Regardless of which variant of the coronavirus is involved: follow the measures. The most effective way to avoid becoming infected is to avoid any direct contact with others. For that reason, stay 1.5 metres apart from others, work from home and stay home as much as possible. Do not leave the house if you have any (mild) symptoms, except to get tested. In most cases, you will have your test result within a day.

* The estimates for R from longer than 14 days ago are reliable. If R is calculated based on data from less than 14 days ago, there are more uncertainties involved. That is why we always look at the R from 14 days ago.