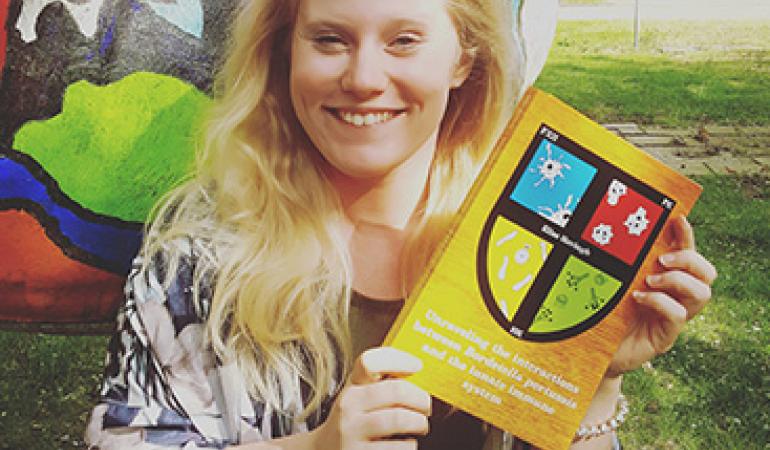 Today, Elise Hovingh will be awarded a PhD at Utrecht University with a thesis about whooping cough. She studied the interaction between the whooping cough bacteria and our immune system. Whooping cough, also known as pertussis, is a highly contagious disease. Despite vaccination, the disease has become increasingly common in recent years. New vaccines will have to be developed for future control of pertussis. More insight into the functioning of the bacterium that causes whooping cough is important here.

Whooping cough vaccination has been part of the Dutch National Immunisation Programme since 1957. As a result, the number of people with whooping cough has declined drastically. More than 95 percent of babies are vaccinated against whooping cough from the age of 2 months. Nevertheless, the number of whooping cough reports has increased in recent years, in all age groups. During a major pertussis outbreak in 2012 more than 13,000 cases were reported and some newborn babies died. Wooping cough is also on the rise in other countries.

There are several reasons for the increase in the number of people with whooping cough. One of the main reasons is that the current vaccine does not ensure lifelong protective immunity. Therefore adults are also at risk of becoming infected. They can transmit the disease to babies who have not yet been vaccinated. Another reason is that the whooping cough bacteria genetically changes, which can also affect the effectiveness of the vaccine.

Elise Hovingh conducted PhD research into how our immune system reacts to the whooping cough bacteria. The focus was on the extent and manner in which the bacterium circumvents our immune system. In addition, she investigated how to best measure the effectiveness of whooping cough vaccines. The research can contribute to the development and evaluation of new vaccines that will provide better and longer-lasting protection against whooping cough.

Elise Hovingh will obtain a PhD at University of Utrecht on Thursday 3 May at 3:30 am with her thesis Unraveling the interactions between Bordetella pertussis and the innate immune system.