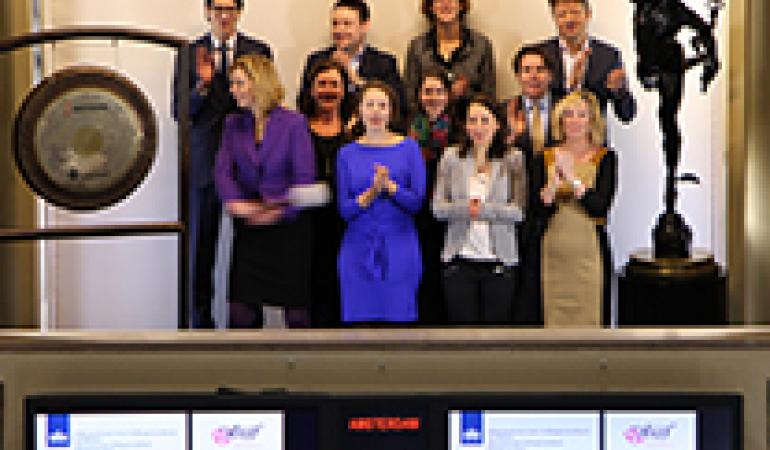 January 20th, the Olive Foundation and RIVM opened AEX trading day in Amsterdam on the occasion of the 9th European Cervical Cancer Prevention Week. This week will be held from 24 -31 January 2015 to raise awareness for cervical cancer and its prevention. Fenneke van Swigchum, president of Olive Foundation, had the honour of sounding the gong.

The European Cervical Cancer Association (ECCA) launched the week of cervical cancer in order to raise awareness for cervical cancer and its prevention. Every year 250,000 women worldwide die of cervical cancer, while the disease often can be prevented by effective screening and vaccination. Many women, however, know very little about this disease and many countries in Europe have no (or insufficient) prevention programs.

The Netherlands offers a well-organised prevention examination. Each year approximately 800,000 women in the Netherlands are invited to have themselves examined. Every woman residing in the nation between 30 and 60 years old is offered a free Pap smear at their own General Practitioner once every five years.

The Netherlands also offers vaccination against HPV infection to twelve year old girls in order to protect against cervical cancer within the National Immunisation Programme (NIP).

Compared to the rest of Europe, cervical cancer is less common in our country. This is partly due to a well-organised and free prevention examination.

More information (in Dutch) can be found at: