Three types of laboratory tests were conducted to determine the extent to which substances can enter the human body via the skin, the gastrointestinal tract or the lungs. These are so-called migration tests. They involve experimental research using artificial sweat and gastric and intestinal juices. The tests are extremely complicated and require specialised equipment. In view of the stipulated time, this could not be done for many samples. For exposure via the lungs, the extent to which substances from rubber granulate evaporate into the air in hot conditions was analysed.
The frequency and length of time people playing sports are in contact with rubber granulate was estimated for different ages and categories. For example, a 4-year-old child, a 7-year-old goal keeper, teenagers and adults who train intensively and for lifelong exposure. Subsequently, calculations were made on the extent to which these categories of people are exposed to the substances released. For this calculation, the maximum detected amount that can be absorbed in the body was assumed for each substance. Therefore, the assumption was a worst case scenario. An estimate of the health risks was made on this basis.

The swallowing of rubber granulate is simulated in a laboratory. First by exposing the granulate to saliva, followed by gastric juices and finally by intestinal juices. This is an experiment in a laboratory setting. That means that the granulate is not actually swallowed by people and that the body fluids are not real but have to be replicated. The part of the substances that remains in the granulate cannot be absorbed by the body and will be excreted via the stool. 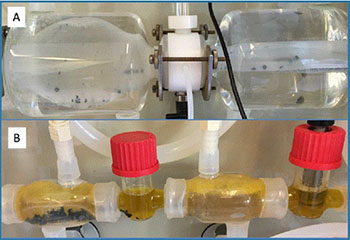 Volatile compounds may be released from rubber granulate, particularly in the summer when the sports fields are warm. To simulate this, samples were heated to 60 degrees Celsius in a sealed tube. Due to the high temperature, substances can evaporate more easily. If the substances do not evaporate at these high temperatures, these substances will not be released at lower temperatures.
Rubber granulate generally consists of particles of 0.5 to 3 millimetres. It is unlikely that the substances are released completely from the particles and absorbed by the skin and in the gastrointestinal system. The substances within the particles are more or less ‘enclosed’ in the molecular structure of the rubber. The results of these tests provide a consistent picture.