The TNCO levels measured by the CI method are at least twice as high for all 100 brands as the levels stated by manufacturers, measured by the ISO method. For some cigarettes, the levels are more than 20 times higher. The biggest difference between the two measurement methods can be seen in cigarettes with relatively low TNCO levels in the ISO method. These low ISO TNCO levels are mainly caused by a high degree of filter ventilation. Because the CI method blocks the filter holes, the degree of filter ventilation does not affect the measurement results. As a result, the differences in TNCO levels between cigarette brands are smaller.

Read more information about the differences between the measurement methods here.

The current law stipulates that cigarette smoke may contain a maximum of 10 mg tar, 1 mg nicotine and 10 mg carbon monoxide, measured according to the ISO method. The ISO TNCO levels fall within those maximum levels and therefore comply with the law. The CI measured TNCO levels are (almost) all higher than this. This is shown in the graphs. 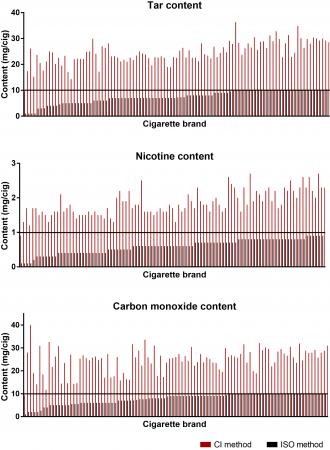