HFCs are hydrocarbons with one or more hydrogen atom replaced by a fluorine atom. They do not contain chlorine or bromine and are therefore not harmful to the ozone layer. HFCs do not occur naturally in the atmosphere. Since the 1980s industry produces increasing amounts of HFCs to be used as refrigerants for refrigerators and air conditioners and to make certain insulating foams. HFCs are also made for some specialized applications, such as solvents, fire extinguishing agents, and as propellants in aerosol sprays and inhalers.

There are dozens of different HFCs, but five are used in relatively large quantities. These are referred to as HFC-32, HFC-125, HFC-134a, HFC-143a, and HFC-152a. They are released in the atmosphere during the production of the substances themselves, during their operational use, and if the equipment is destroyed. When used in spray cans they are emitted into the atmosphere immediately. When used in refrigerators and air conditioners they are emitted after an average of about 10 years and when used in insulating sometimes only after 50 years.

After being emitted, HFCs are broken down in the atmosphere by natural processes. This happens on average after one to 50 years. Most of the breakdown products have no harmful effects on the environment. In some cases trifluoroacetic acid (TFA) can be formed, a substance which can cause adverse effects for animals and plants at high concentrations in water. However, it is expected that the concentrations of TFA in surface water continues to be low also in the future. 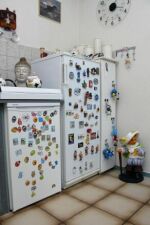