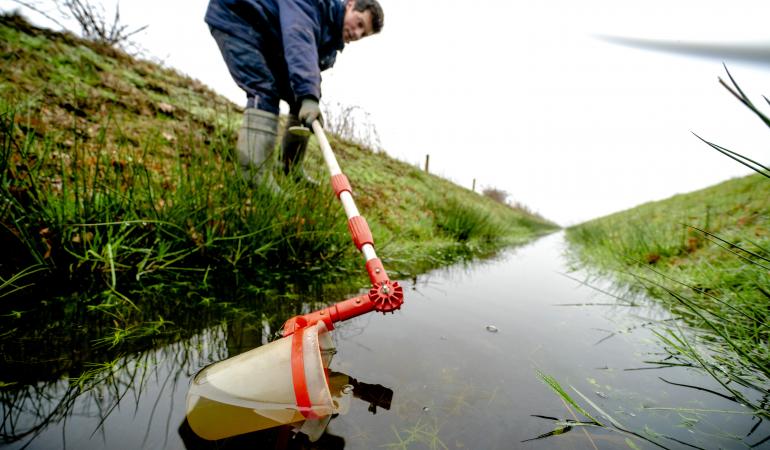 More nitrogen and phosphorus have been ending up in the soil on farms since 2015. As a result, nitrate concentrations have been rising since 2017 in leachates and ditch water from those farms. This becomes apparent from the 2020 Nitrate Report by RIVM. Research has shown that the rise has been caused by an increase in nitrogen application and the recent dry summers (2018 and 2019). Crops took up less nitrogen and phosphorus because of the drought. The surplus that this creates then leaches partially into surface waters and the groundwater. Current policy is insufficient to achieve the objectives. This question becomes even more urgent if we take account of the increasingly frequent dry periods, such as was the case in recent years.

Water quality is improving, but not yet by enough

The water quality in groundwater and surface waters in the Netherlands has improved in recent decades. This is largely because farmers are using less fertiliser and doing so more carefully. The improvement in water quality has been much less rapid over recent years than it was in the past. Many waters do not yet comply with the desired quality levels. Nitrate concentrations turn out above all to be too high in the uppermost metre of the groundwater on over half the farms in areas with sandy and loess soils, as well as in 30 of the roughly 200 (i.e. about 15%) of the groundwater protection areas.

The importance of clean water

Too much nitrogen and phosphorus in the water has negative effects on the water quality in the Netherlands in various ways. First of all, surface waters can become hazardous for people to swim in, for example because of the growth of blue-green algae. Contact with or ingestion of blue-green algae can cause health issues. Animals that drink the water can also show symptoms of toxicity. Another negative effect is reduction of biodiversity, as desirable aquatic flora and fauna disappear due to the surplus of nitrogen and phosphorus, while undesirable species (such as algae and duckweed) thrive and can cause even more of the desirable species to disappear. These undesirable species can also make the water look unattractive and give it an unpleasant odour. Finally, drinking water companies have to make more and more efforts to remove nitrate and other pollutants from groundwater and surface water for our drinking water supplies.

The 2020 Nitrate Report provides an overview of the measures, changes in agriculture and the effects on the quality of groundwater and surface water. RIVM has produced this overview together with Statistics Netherlands (CBS), Rijkswaterstaat (the Directorate-General for Public Works and Water Management)/Water Traffic and Environment (RWS/WVL), Deltares, Wageningen Economic Research and the Netherlands Enterprise Agency (RVO). The Netherlands reports every four years on the quality of the groundwater and surface water, and how that is evolving over time. This is an obligation imposed by the European Commission.