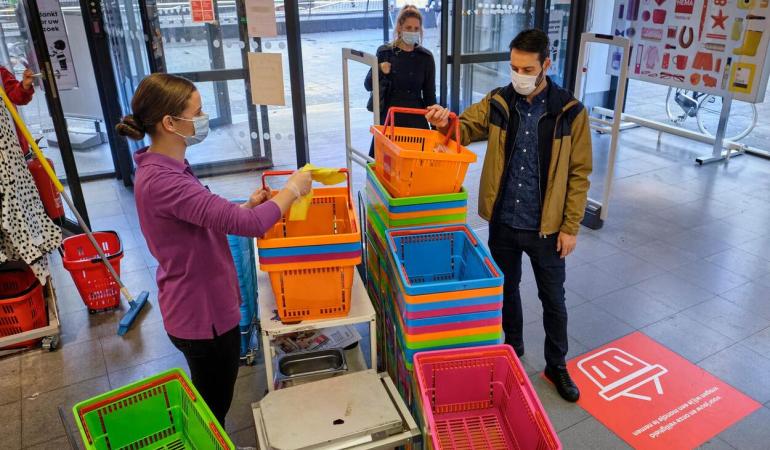 Autumn 2020 saw a strong surge in the number of people who tested positive for COVID-19. More stringent measures were introduced, followed by a significant, but relatively short-term downward trend. This decrease coincided with a significant change in behaviour, measured in mid-November. For example, Dutch people indicated that they avoid busy places more often than six weeks earlier (67%, compared to 58% previously). They also found it easier to do so, possibly as a result of the more stringent measures. This was clear from the eighth round of the behavioural study conducted by RIVM, the Netherlands Municipal Public Health Services and Medical Assistance in Accidents and Disasters (GGD-GHOR) and the Municipal Public Health Services (GGDs).

The number of people with new symptoms who arranged to get tested increased significantly (from 42% to 58%). Some study participants had not been tested despite symptoms; 61% of these said that they had very mild symptoms and did not think they were infected with COVID-19. Most people arranged to be tested in the GGD test lanes. Within six weeks, the number of people who were tested outside the regular test lanes increased from 6% to 12%.

66% of people with symptoms indicated that they had gone outside, for example to go shopping (42%) or to work outside the home (23%). When asked whether people were prepared for an unexpected quarantine period, 74% said they had enough groceries in the house to last a few days. 58% already knew who they could ask to arrange shopping for them. Less than half of the study participants (46%) already knew who they could ask to arrange other practical matters (such as picking up/bringing children), or who could take on their work or informal care responsibilities.

The favourable effects in terms of compliance are accompanied by a negative trend in terms of well-being: more people say they feel lonely or somewhat lonely again, compared to the previous survey 6 weeks earlier (58% now, 51% then). For the first time since the start of the measurements, the percentage of people who indicated that they were exercising and playing sports less or much less than before the coronavirus pandemic has increased again (33% now, compared to 26% in early October).

More figures on such topics as willingness to vaccinate, plans for the holidays and confidence in policy can be found on the extensive page on the behavioural study (in Dutch).

In order to gain a better understanding of people’s thoughts about the coronavirus measures, what motivates them to comply, and how people are affected, a major study has been launched jointly by RIVM, the Netherlands Municipal Public Health Services and Medical Assistance in Accidents and Disasters (GGD-GHOR Nederland) and the Municipal Public Health Services (GGDs). It focuses on human behaviour, what people think of the government’s behavioural measures, and how they are doing. The results above were taken from the eighth survey of more than 64,000 people in 11-15 November and compared to results from the previous surveys. These insights help the government to provide better support and information to citizens.