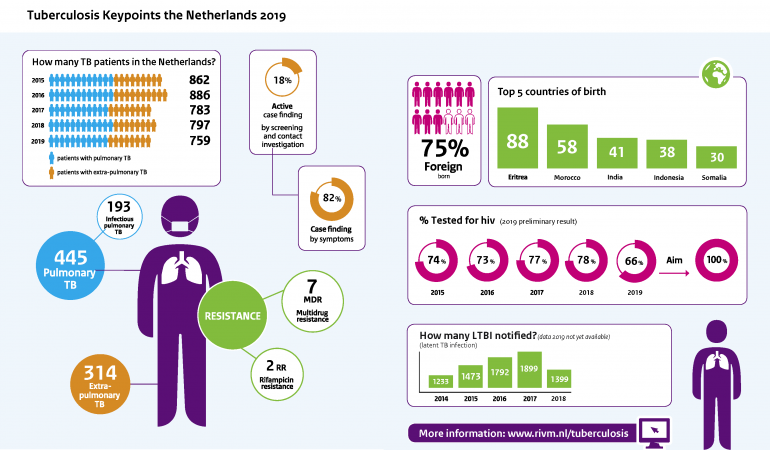 In 2019, the number of people with tuberculosis (TB) in the Netherlands decreased to 759. This is 5 per cent less than in 2018, when 797 were reported. Of these patients, 445 had tuberculosis in the lungs, and 314 had extrapulmonary tuberculosis. These are the new annual key figures of RIVM.

Three-quarters of the TB patients in the Netherlands were born in countries where tuberculosis is common. In 2019, most TB patients were from Eritrea (88), followed by Morocco (58) and India (41).

Tuberculosis is an infectious disease caused by a bacterium. It is a notifiable disease, which means that doctors have to report the disease to the Municipal Public Health Service (GGD). The GGD then reports to RIVM. Tuberculosis can be contagious, for example, if the disease is in the lungs. The most contagious form (open tuberculosis) occurred in a quarter of the patients in 2019.

Tuberculosis is treatable with antibiotics. The treatment of tuberculosis consists of a combination of different types of antibiotics. Patients must take medication daily for at least six months. In case of severe resistance to the antibiotics, the duration of treatment can be as long as 20 months. In 2019, nine patients had this severe form of drug-resistant tuberculosis.

Tuesday 24 March 2020 is World Stop Tuberculosis Day. The purpose of this day is to raise awareness about the global spread and control of tuberculosis. Tuberculosis is the most deadly infectious disease in the world. Worldwide, ten million people have the disease every year and 1.5 million people die from it annually.