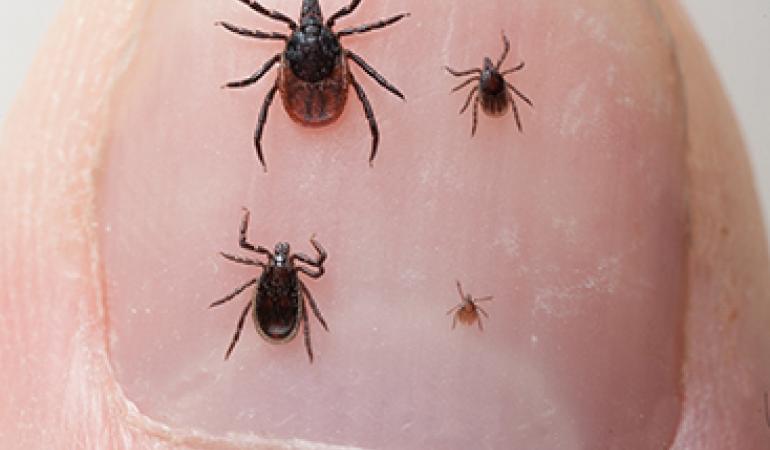 One in 5 tick bites occurs in an urban area. Although most tick bites occur in the countryside, many people are bitten in urban areas as well. This is the finding of an analysis of tick bite reports at Tekenradar.nl. Now that the tick season has started, it is important to check for tick bites after any time spent in any areas of greenery, including those in urban areas.

More than 1 in 5 tick bites occur in urban areas (municipalities where the population density is high). People are bitten by ticks primarily in urban parks or woods (approximately half) and in their own gardens (approximately 1 in 3 tick bites). These are the findings of an analysis of tick bite reports at Tekenradar.nl since 2012. This was the first analysis of the proportion of all tick bites which occur within urban areas.

Every year people in the Netherlands suffer approximately 1.3 million tick bites. It is important to check for tick bites after you have been in the countryside or ‘areas of greenery’, whether inside or outside urban areas, for example after a visit to a park or a playground or after spending time in the garden and, of course, after a walk in the woods or the dunes as well. Remove a tick as quickly as possible after a bite. The longer the tick is attached to the skin, the higher the risk of the tick transmitting pathogens.

Every day the Tekenradar.nl website displays the expected tick activity per region. Now the temperature is rising, the number of reports of tick bites is also increasing. This is expected to continue for the next few weeks. People can also participate in a variety of surveys via Tekenradar. They can register if they have been bitten by a tick, or are exhibiting the initial symptoms of Lyme disease. This year researchers will commence research into the characteristics of gardens in which tick bites have been reported. This means gardens both inside and outside the urban areas.

More information in Dutch about tick bites can be found at www.rivm.nl/tekenbeet and at www.tekenradar.nl You can find the link to the Tick Bite app on the RIVM website. On these websites and in the app you can see what a tick looks like and how you can remove one if it has become attached to your skin. You can also see various examples of the typical skin rash which follows a tick bite and which is an initial indication of Lyme disease.