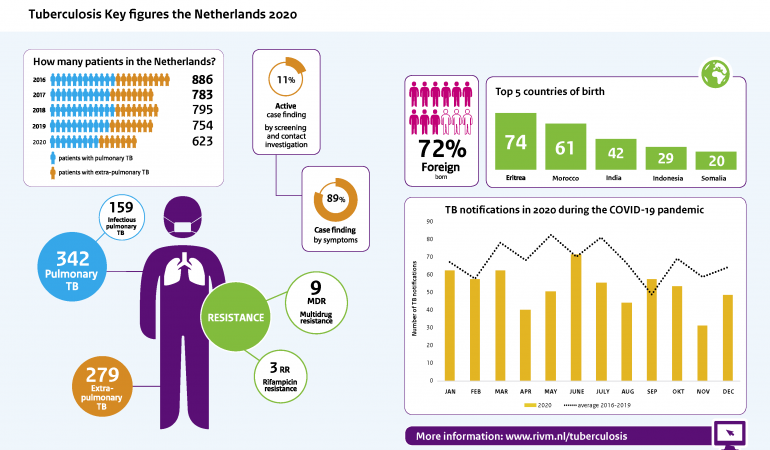 Last year, the incidence of tuberculosis (TB) in the Netherlands fell sharply. The 17% drop is the largest in fifty years. In 2020, 623 cases were notified compared to 754 in 2019. This is reported by the Dutch National Institute for Public Health and the Environment (RIVM).

The number of reported TB cases was considerably lower during the COVID-19 lockdown periods than in the same months in previous years. A combination of three causes possibly explains the sharp decline.

The first explanation is the impact of COVID-19 control measures, such as social distancing. These measures also prevent the spread of TB bacteria. The number of infection clusters indeed decreased in 2020 compared to previous years.

Another explanation is a reduced number of immigrants and asylum seekers arriving in the Netherlands. Migrants from countries where TB is common are mandatorily screened for TB. The number of TB patients detected at this entry screening decreased from 49 in 2019 to 21 in 2020. Because of the low numbers, only part of the overall decrease can be explained.

Delay in diagnosis can also be an explanation. During the COVID-19 pandemic, people avoided going to the doctor and access to primary and secondary healthcare was reduced. These people will likely come forward later, possibly with more severe symptoms.

Whether the number of TB patients in the Netherlands will remain low and continue to decline will only become apparent in the following years. RIVM will closely monitor these trends.

Tuberculosis is an infectious disease caused by a bacterium. It can be infectious if the disease is in the lungs. The most infectious form (open tuberculosis) occurred in a quarter of all patients in 2020.

Almost three out of four TB patients in the Netherlands came from countries where TB is prevalent. In 2020, most of these TB patients were born in Eritrea (74), followed by Morocco (61) and India (42).

Early detection of TB prevents other people from getting the disease. In 2020, TB was found in 7 per cent of patients by screening at-risk groups, such as immigrants and asylum seekers. In six per cent of the patients, the disease was found in contacts of infectious TB patients. The majority of patients (89 per cent) were found when they consulted a doctor with complaints.

Tuberculosis can be treated effectively. The treatment consists of a combination of different types of antibiotics. Patients must take medication daily for at least six months. In case of severe resistance to the antibiotics, treatment duration can be as long as 20 months. 12 patients had this form of drug-resistant TB in 2020.

Wednesday 24 March 2021 is World Stop Tuberculosis Day. During this day, awareness is raised about the global spread and control of tuberculosis. Worldwide, ten million people have the disease every year, and 1.5 million people die annually.