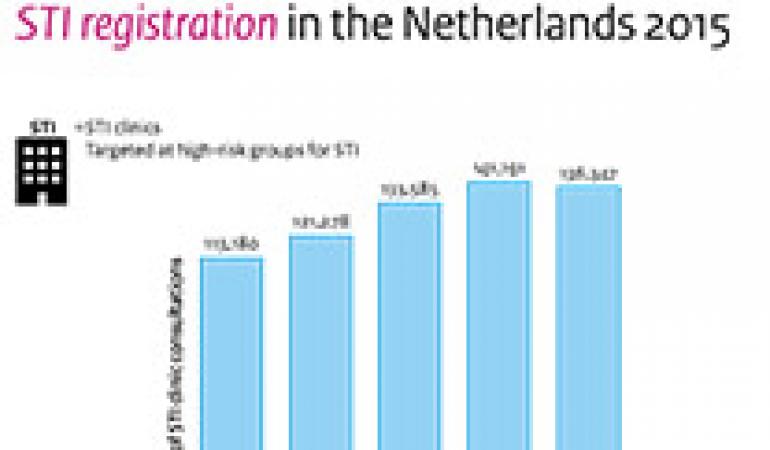 The total number of STI clinic consultations in 2015 was 136,347, a drop of 3.4 per cent compared to 2014. The decrease in consultations is a result of the financial restrictions introduced in 2015 of the “additional regulation for sexual health” (ASG), ‘freezing’ the number of visitors per STI clinic and limiting the number of tests performed, causing a stricter triage at the STI clinics. The number of GP consultations also seems to decline, but the most recent data is from 2014. See also our infographic.

STI clinics offer free STI tests for high-risk groups. The majority of STIs concerned people who had been warned of possible STI exposure by their (former) partner, people with STI-related complaints, and HIV positive men who have sex with men (MSM). Young adults under 20 years of age with low-level qualifications and people who visit an STI clinic a second time in the same year are diagnosed with STIs more frequently.

In 2015, 13.7 per cent of STI clinic attendees had a chlamydia infection (18,585 diagnoses). This figure represents an increase of 1.1 per cent compared to 2014. The biggest increase was seen in heterosexual men (up from 13.9 per cent in 2014 to 16.1 per cent in 2015). Chlamydia was diagnosed most frequently in women and heterosexual men under 20 years of age (21.0 per cent) and in people who had been warned about potential exposure (34.0 per cent). The percentage of MSM diagnosed with chlamydia has been stable for years at around 10 per cent.

The number of gonorrhoea diagnoses increased by 17 per cent to 5,391 diagnoses. This STI is more frequently seen in MSM (10.7 per cent), while the percentage in women and heterosexual men remained stable (1.6 and 1.9 per cent, respectively). One in five gonorrhoea cases was diagnosed following a warning from a partner. To date, no gonorrhoea infections have been found with resistance against first-line antibiotics in the Netherlands. Less than half of the samples testing positive were also tested resistance, a drop compared to previous years.