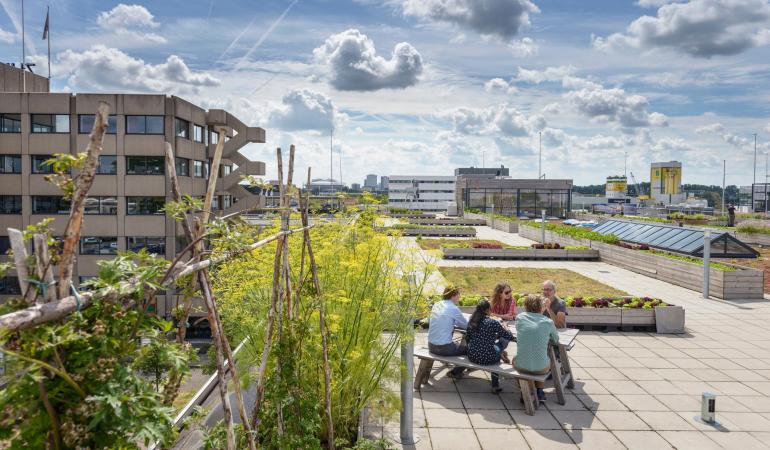 The municipality of Amsterdam aims to make the city greener. To gain more insight into the benefits of green infrastructure, it commissioned the development of four different scenarios. For every scenario, and for the current situation, RIVM has calculated the value for the living environment of the city.

Benefits
RIVM investigated how investments in green and blue spaces contribute to the well-being of citizens of Amsterdam. RIVM also included how the municipality can mitigate the impact of climate change, for instance by storing rainwater and excess heat. The benefits differ per scenario but prove considerable. This varies from less sick people, less absenteeism and more physical activity, to improved air quality, fewer water treatment costs and higher real estate value. Benefits were found to be most prominent in densely populated areas with relatively few green spaces.

Quality of the living environment
Urban green, such as parks, canals, and green roofs, can lead to benefits that improve the quality of the living environment. While some of the benefits are not difficult to envision, such as the use of parks as recreation sites, green also contributes to complex processes, such as enhanced air quality, cooling temperatures in cities, more biodiversity, and the storage of water in the soil, which leads to reduced pressure on sewer systems.

National Capital Model
In order to quantify the value generated by green and blue spaces, the Natural Capital Model was implemented in this city. The model has been developed by RIVM, Wageningen Environmental Research (WEnR), and the Netherlands Environmental Assessment Agency (PBL).