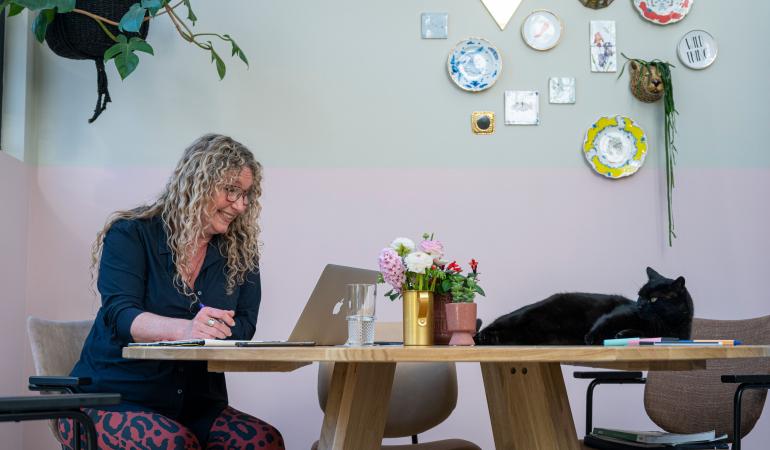 In the past week, from 27 January to 2 February, 28,628 people reportedly tested positive for COVID-19 in the Netherlands, a 20% decrease compared to the week of 20 to 26 January. The percentage of people who tested positive for COVID-19 was 11.4%, about the same as the week before that (11.7%). With 164 infections per 100,000 inhabitants in the past week, the Netherlands is still in the serious phase of the epidemic. The number of people being tested has decreased in recent weeks. The number of new hospital admissions decreased slightly in the past week, as it did the week before. The number of ICU admissions increased somewhat. 1,216 new hospital admissions were registered in the week of 25 to 31 January, which is 166 fewer admissions than in the week before that. As a subset of these hospital admissions, 254 people were admitted to ICU wards, 10 more than the previous week. For the rest of the figures for this week, see the current information about COVID-19 and the epidemiological report.

The decrease in reported figures is a result of the measures that were announced on 15 December 2020. Expectations are that the figures would have decreased even more without the new coronavirus variants that have arrived in the Netherlands, especially the UK variant. It is not yet clear what the impact has been of the further restrictions on visits and the night-time curfew, which took effect on 23 January.

In summary, it can be stated that the situation would be moving in the right direction, without the more contagious variants. The fact that two-thirds of all new infections currently involve the UK variant is disrupting the plans. This means that measures can only be eased with the utmost caution.

Testing in the GGD test lanes

The number of people who were tested in the test lanes of the Municipal Public Health Services (GGDs) decreased in recent weeks (-22%, see Figure 1). In the past calendar week, 208,459 people were tested for whom the test results are known, compared to 268,850 in the week before that. Of the people who were tested, the percentage who tested positive for COVID-19 has remained about the same in recent weeks. This percentage has been between 11% and 12% for the past 3 weeks. It can be used as an indicator of the probability that people who get tested are infected with the coronavirus SARS-CoV-2. This may mean that people with mild symptoms did not make an appointment to get tested as often. It may also be that fewer people have symptoms, which is the impression provided by Infectieradar. In order to slow down the spread of the virus, including the new variants, it is and remains important that anyone who has symptoms that could indicate COVID-19 gets tested as soon as possible. Testing is important even if the symptoms are mild. 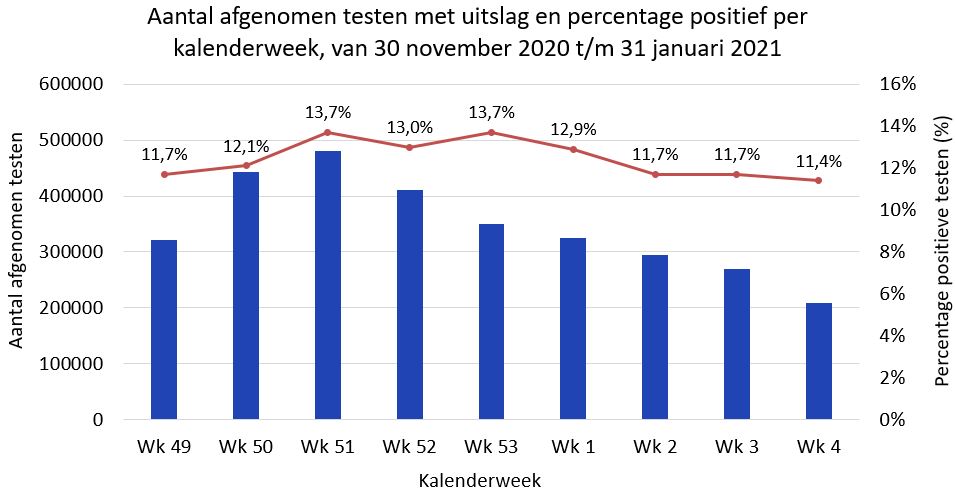 Four new coronavirus variants have been found in the Netherlands. This concerns the variants that have been referred to as the UK variant and the South Africa variant, as well as two Brazilian variants.

UK variant
Of these four new variants, the SARS-CoV-2 variant that was discovered in the United Kingdom is spreading fastest. Pathogen surveillance* data shows that an estimated 19.8% of positive tests during the week of 11 to 17 January involved this more contagious UK variant. It looks like this upward trend has continued in the week of 18 to 24 January (data not yet complete). It has been estimated based on modelling that about two-thirds of the people infected last week (27 January to 2 February) have the UK variant.

Brazilian variants
During pathogen surveillance and source and contact tracing, two new variants of the coronavirus SARS-CoV-2 have been found in the Netherlands, both originating from Brazil: the P1 and P2 variants. The P1 variant was confirmed in 2 people who recently visited Brazil. The P2 variant was found in three people, two with no travel history to the South American country; the third person had recently visited Brazil.

Reproduction number below 1 overall, but well above 1 for UK variant

On 15 January**, the combined reproduction number (for all variants) in the Netherlands was 0.97 (lower limit 0.94, upper limit 1.00). This was a slight increase compared to the week before that, when the R number was 0.93. A reproduction number of 0.97 means that 100 people with COVID-19 will collectively infect another 97 people.

On 15 January, the reproduction number of the ‘older’ variants that had previously been prevalent in the Netherlands was 0.86 (lower limit 0.78, upper limit 0.92). Without the increased spread of the UK variant, the number of new infections would have been much lower.

Our behaviour can protect ourselves and others against the virus. Regardless of which virus variant is involved: follow the measures. The most effective way to avoid becoming infected is to stay 1.5 metres apart from others. Work from home and stay home as much as possible. If you have symptoms, stay home and get tested – even if the symptoms are mild. Do not break quarantine. And limit the number of people you have contact with, because fewer contacts means fewer chances to encounter and spread the virus.

*The UK variant, the South Africa variant and the Brazilian variants were detected in the Netherlands in the context of outbreaks and during pathogen surveillance. Based on a positive COVID-19 test result, it is not possible for a laboratory technician in the Netherlands to determine which variant of the coronavirus SARS-CoV-2 caused the infection. Pathogen surveillance is used to quickly detect variations in a virus, and to gain insight into their spread. Every week, a random sampling of positive COVID-19 tests is subjected to additional research by means of sequencing. This means further investigation of the virus sample that was taken with a cotton swab in the nose and throat. Sequencing looks at the building blocks of the virus. By looking at how the virus is constructed, it is possible to recognise characteristic ‘building blocks’ of a variant. Pathogen surveillance takes time, often one to two weeks, from submitting the virus sample from a person who tested positive, to sequencing and assessing which virus variant is involved.