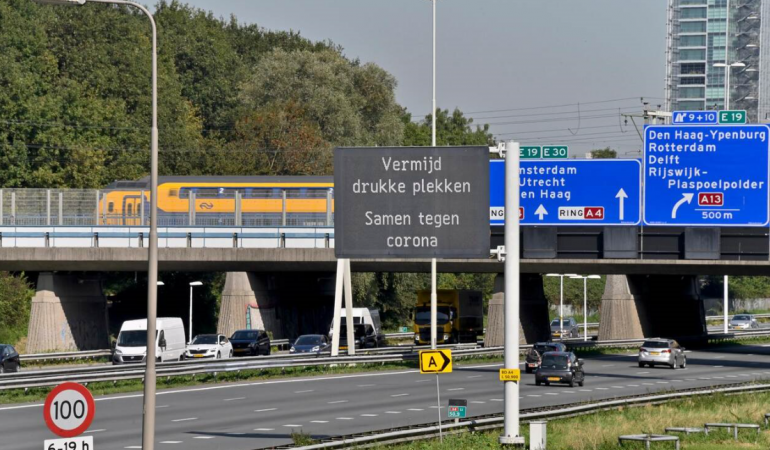 The number of reported cases of COVID-19 continues to rise in all regions and in all age groups. The Municipal Public Health Service (GGD) reported that 43,903 people tested positive for COVID-19 in the past week. That is over 16,000 more than in the previous week, an increase of 60%. The national measures that were implemented on 29 September have not had any visible effect so far. The reported number of people who tested positive for COVID-19 has not yet stabilised.

Table 1: Number of confirmed cases per 100,000 inhabitants in the past 7 weeks, by security region. 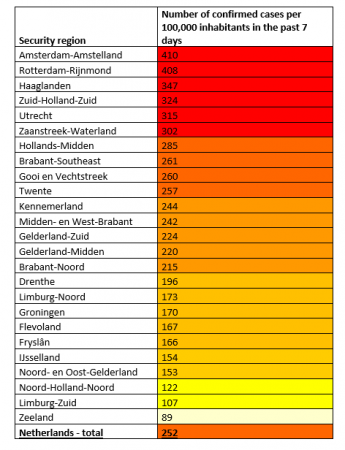 The number of infections is increasing in all age categories. The highest number of people who tested positive for COVID-19 per 100,000 inhabitants is still in the age category of 18 to 24 years.

The number of people admitted to intensive care with COVID-19 also increased. In the past week, the NICE Foundation recorded 192 new admissions to Intensive Care. In the week before that, there were 122 admissions to ICU; this is an increase of nearly 60%.*

The deaths of 150 COVID-19 patients were reported to the Municipal Public Health Services (GGDs) in the past week.* The deceased patients were all over 35 years old.

* Not all of the reported hospital admissions or deaths occurred within the last week.

Statistics Netherlands (CBS) reported last week that more people had died than expected, for the second week in a row. The higher mortality rate coincides with the emerging second wave of the novel coronavirus epidemic. See also: news item on monitoring excess mortality. Some percentage of the excess mortality may be related to COVID-19. How high that percentage is will become clear later on in the records stating cause of death.

The reproduction number is 1.27 (range 1.26 - 1.31) and has not changed very much compared to last week. For the sixth consecutive week, the confidence interval is entirely above 1. A reproduction number of 1.27 means that 100 people who are infected with the novel coronavirus will collectively infect another 127 people.

**More information on the coronavirus models used at RIVM

To prevent the virus from continuing to spread, it is important for everyone to comply with the measures. Keep your distance. Work from home. If you have symptoms, stay home and get tested. Wash your hands frequently, and in any case when you arrive at home, after using the toilet, and before preparing food. Sneeze and cough into your elbow.