The number of newly reported COVID-19 infections decreased slightly last week compared to the week before that. Reproduction number R is still entirely above 1. The number of new hospital admissions has increased somewhat.

64,087 new COVID-19 cases* were reported last week, 3,455 (-5%) less than the week before. The lower number of reported infections was observed particularly in the last few days. This seems to be the effect of the measures that were implemented at the end of September and in mid-October. The number of contagious people remains high, reaching 166,000 this week.

In the week of 26 October to 1 November, 295,147* people were tested in the GGD test lanes, over 26,500 people more than in the week before. The test results for 292,613 people are known. 48,495 of those people tested positive for COVID-19. The percentage of positive tests is still high (16.6%), but has decreased compared to the previous week for the first time since July. 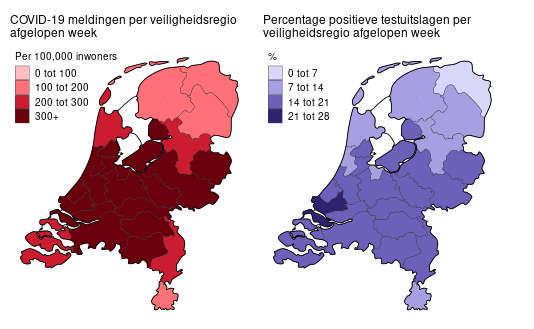 It continues to be important to always get tested if you have mild symptoms that could indicate COVID-19 – even if you think it might just be a common cold.

To prevent the virus from continuing to spread, it is important for everyone to comply with the measures and the basic rules. Stay at least 1.5 metres from others. Work from home. If you have symptoms, stay home and get tested. Wash your hands frequently, especially when you arrive at home. Sneeze and cough into your elbow.