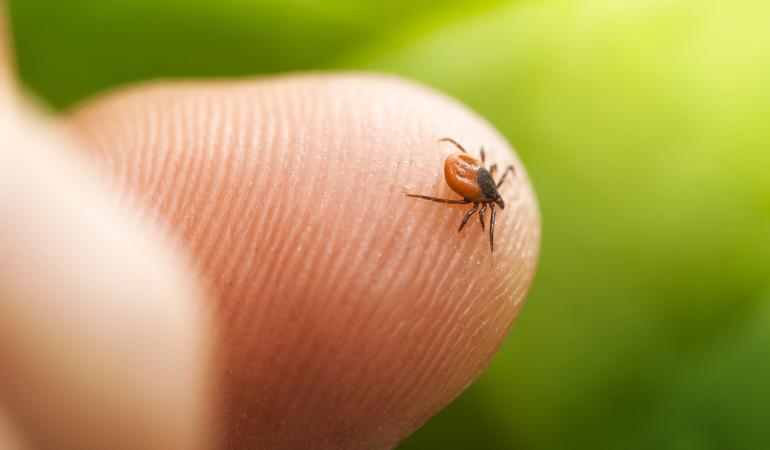 After recording 80,000 tick bites in 10 years via Tekenradar.nl, we now know that you are most likely to be bitten by a tick in Drenthe. Quickly removing the tick halves the chance of contracting Lyme disease. We have also improved our ability to recognise Lyme disease. From now on, people can indicate whether they have been bitten on a weekly basis. This will allow us to see the risk of being bitten by a tick at any given time.

Exactly ten years ago, RIVM and Wageningen University launched Tekenradar.nl: the citizen science network for research into and education on tick bites and Lyme disease. Since then, more than 80,000 tick bites have been reported. We have gained many new insights from a number of studies in collaboration with the Lyme disease centres of Amsterdam UMC and Radboudumc. This has allowed us to improve our knowledge of where, when and how tick bites and Lyme disease occur, and we are able to identify the disease more quickly.

Most tick bite reports came from Gelderland, North Brabant and North Holland. The number of tick bites relative to the population is highest in Drenthe, followed by Gelderland, and lowest in South Holland. The number of tick bite reports is highest in June and July. These months account for about 50% of all tick bite reports per year. We also found that almost one in five people who reported a tick bite discovered more than one tick bite simultaneously. Notably, adults were bitten on their leg in just over half the cases, while children were more likely to be bitten on their head or neck. However, bites were reported all over the body for both adults and children. If you find a tick on yourself, be sure to check the rest of your body thoroughly.

We researched who did and who did not contract Lyme disease after a tick bite report. We now know that the chance of contracting Lyme disease after a tick bite is 2-3% on average, despite the fact that 20% of ticks carry the bacteria that can causeLyme disease. If you remove the tick quickly (within a few hours), this halves the chance. If you leave the tick be until it has had its fill, this doubles the chance. This underlines the importance of doing tick checks after going out in nature and the need to remove ticks quickly.

Every year, Dutch people suffer 1.5 million tick bites, resulting in 27,000 people contracting Lyme disease. This is often the early stage of the disease, with discolouration of the skin at the location of the tick bite. Due to Tick Radar research, we now know that it is not always a red ring. In a third of the cases, it looks more like an even reddish rash, which is harder to recognise.

Identifying this red ring or rash after a tick bite is crucial, as this is the first sign of Lyme disease. There are no blood tests that can accurately detect Lyme disease at this early stage. So, keep an eye on the location of the tick bite for up to three months after the bite, in case a red ring or rash appears.
Fortunately, most people with Lyme disease recover without lasting complaints after treatment with antibiotics. Thanks to the Tick Radar research, we now know that, of the 27,000 people who contract Lyme disease every year, some 1,000 to 1,500 people suffer long-term complications after treatment. The exact cause of these complications is as yet unknown.

New research via Tekenradar.nl: chance of tick bites per week

'Previously, we were already able to look at the number of tick bite reports on Tekenradar.nl, but we weren't exactly sure what impact media attention, for example, had on sudden increases in the number of tick bites', says Wageningen University researcher Arnold van Vliet. 'By asking as many participants as possible every week whether and how many times they have been bitten by ticks, we will soon be able to determine the chance of tick bites per number of participants.’

‘This will allow us to give a much more accurate indication of when the chance of tick bites is highest and when a tick check after being out in nature is even more important than usual', says RIVM researcher Kees van den Wijngaard.
The researchers stress that it remains important to check for ticks after every visit to nature and that most people fortunately do not become ill after a tick bite.

If you have a tick bite, quickly remove the tick with a point tweezer or tick remover. You can report tick bites on Tekenradar.nl. On this website, you can also sign up to report whether you have been bitten by a tick on a weekly basis.