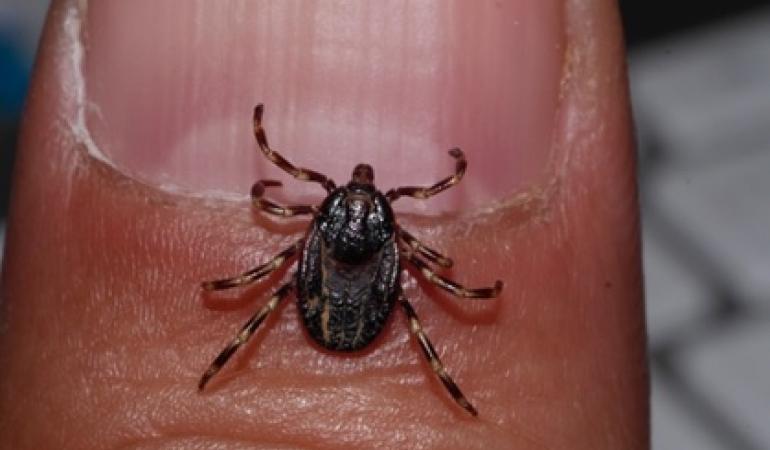 RIVM has investigated the so-called giant tick that was found in Odoorn in the province of Drenthe on 13 July. It is a Hyalomma marginatum female.

The tick from Drenthe is the second sighting of an adult Hyalomma marginatum in the Netherlands this year. The first specimen was found a week earlier in the Achterhoek. The Centre for Monitoring of Vectors (CMV) of the Netherlands Food and Consumer Product Safety Authority (NVWA) investigated both locations and found no other Hyalomma ticks. 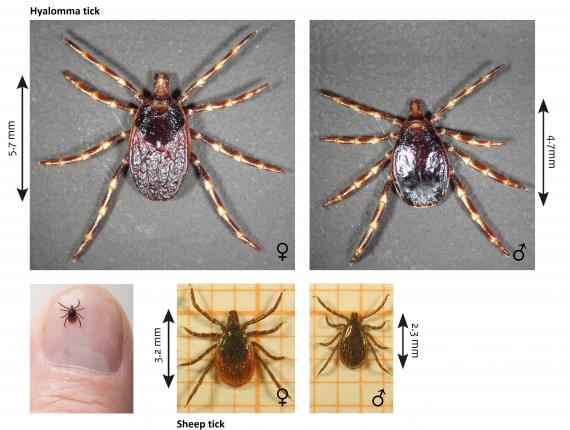 Hyalomania ticks (above) are clearly larger than the common sheep tick (bottom) in the Netherlands. Bottom left a sheep tick on a thumbnail. Image: Zati Vatansever, Kafkas University

RIVM did find the bacterium Rickettsia aeschlimannii in the Hyalomma tick from Drenthe. People infected with this bacterium may develop fever, headache, muscle pain and a characteristic rash. This disease, also known as spotted fever, is rare. Spotted fever is easy to diagnose and treat with antibiotics. Horse owners should be aware that the Hyalomma tick could carry parasites that can give horses’ piroplasmosis. The parasites were not found in the tick from Drenthe.

What can you do?

Have you been in the greenery, for example, the countryside, garden, dunes, meadows or woodlands? Then check yourself and your children for tick bites. Regardless of the type of tick you have been bitten by, remove the tick with a pointed pair of tweezers or another tick remover.

If you experience symptoms such as a round spot or ring that grows slowly after a few days or months, contact your general practitioner (GP) and inform him that you were bitten by a tick recently. Also, contact your GP if you have a fever, nerve problems, muscle or joint pain. Ticks not only occur in the Netherlands. Please also do a tick check if you have been in the greenery abroad.

Due to reports from citizens, the CMV was already able to confirm two sightings of the Hyalomma tick. However, not all reports are correct. Therefore, it is essential to let an expert determine whether it is a Hyalomma tick. Sightings of Dutch ticks can be reported via the NVWA website (search for Hyalomma). Information about recognising the tick is also available at the NVWA website.