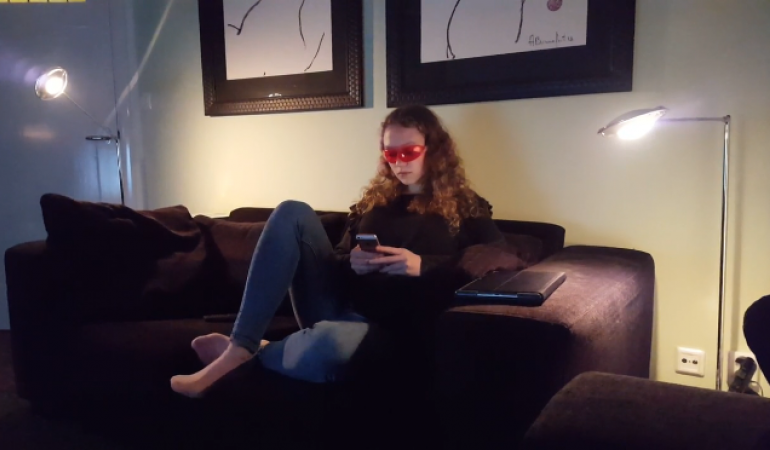 Young people (13-18 years) who use light-emitting screens daily in the hour before going to sleep have more sleep problems. It takes longer to fall asleep, they have a shorter sleep duration and wake up more frequently during the night. They also struggle to stay awake during the day. These complaints reduced among adolescents who were not using screens for one week during the evening. It also helps if they use orange tinted glasses that block blue light during evening screen use.

For the first time in the Netherlands, researchers looked at the effects on sleep in children and adolescents (8-18 years) who use screens (tablets, smartphones) before bedtime. More than one in five children (8-13 years) uses a screen every day in the evening (22%). This is 83% among young people (13-18 years). Often they use a screen in the evening for more than two hours.

The group that uses screens for a long or longer period sleeps up to half an hour less. This connection suggests a causal relationship, but there is no evidence for that yet. Therefore, the researchers let young people use a screen for a week and wear orange tinted glasses blocking the blue light. The complaints reduced in these young people.

It is vital that people are aware of the use of a computer, smartphone or tablet in the hour before going to sleep. It is known that blue light during the evening influences our biological clock and can disturb sleep. A chronic sleep disturbance can cause concentration problems, reduced performance at school or work and can cause health problems.

In the past years' several light-emitting screens have been developed: in addition to the television that has been around several decades, we now have computers, laptops, tablets and smartphones. In particular, the recently developed screens that use light-emitting diodes (LEDs) as a light source emit more blue light compared to more traditional light sources. It is known that blue light during the evening influences our biological clock and can disturb sleep.

This research shows that blue light does indeed have effects on sleep. Also, the 'cognitive load' (active activity) of the activities on devices with luminous screens may play a role. Another factor might be that people go to sleep later as a result of screen use. If they have to get up in the morning at the usual time, there is less time to sleep.

The study confirms results from previous research among adults. This showed that frequent or prolonged screen use in the evening is associated with sleep complaints. Follow-up research should show whether available (built-in) blue light filters on devices can reduce the effects on sleep. Further research is also needed to clarify the exact role of the possible different underlying mechanisms.

RIVM conducted this research in collaboration with the Amsterdam University Medical Center, the Netherlands Institute for Neuroscience and Lifelines. The research was commissioned by the Netherlands Food and Consumer Product Safety Authority.