The conference was a joint initiative of the Dutch Ministry of Environment and Water Management and the National Institute of Public Health and Environment (RIVM). Representatives of the EU Member States and Associated countries, the European Commission, OECD and other international bodies and stakeholders attended the conference.

The conference started with a series of presentations. They gave an interesting view on the world of possibilities of (new) nanomaterials, and the regulatory challenges regarding safety and health. Also the issues and recommendations that resulted from the NANoREG and ProSafe projects have been presented. They formed the basis to discuss initiatives of the participants to further develop and implement the recommendations as listed in the White Paper of the ProSafe project. 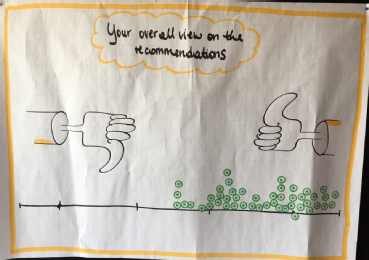 After an elaborated introduction on the fourteen recommendations on April 17th, the initial view of the participants on the recommendations was positive see photograph. By the end of the first day of the meeting 13 preliminary initiatives were formulated. During the second day these initiatives have been discussed in several rounds and elaborated into nine action plans. Alliances have been created that jointly take responsibility to implement these action plans.

More news on the actions plans and follow up -if available- will be included in these pages.