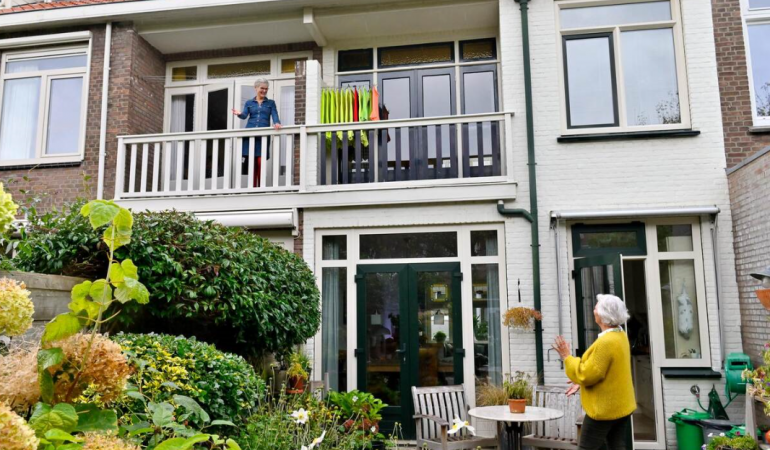 The reproduction number (R) has dropped below 1 for the first time since mid-June; the confidence level is entirely below 1. This seems to be the effect of the measures that were implemented at the end of September and in mid-October. The number of contagious people remains high, reaching over 145,000 this week (lower limit 105,000 – upper limit 187,000).

Although there is a downward trend, the number of reported infections and hospital admissions remains high. The number of newly reported infections last week (4-10 November) is comparable to the weekly figures for the week of 7-10 October, when there were 43,903 newly reported COVID-19 infections. That was when the Cabinet announced the national measures. In that same week (7-10 October), there were 1,144 new hospital admissions and 192 new ICU admissions, compared to 1,520 new admissions to nursing wards and 275 new ICU admissions last week.

*COVID-19 is a notifiable disease, so it is legally required to report a positive COVID-19 test result to the Municipal Public Health Service (GGD). Everyone, including commercial test providers, must comply with that legal requirement. The inspectorate oversees compliance. The government has published guidance documents on coronavirus testing outside the GGD test lanes. When providing the test numbers to RIVM, the GGDs do not differentiate between positive tests reported by the GGD test lanes or by others. Test providers not only include commercial test lanes, but also hospitals and GP practices.

A downward trend can be observed in all regions. The regions that saw the most significant decrease were Groningen and Noord- en Oost-Gelderland. These regions had a decrease of over 40% compared to the week before.

In the week of 2 to 8 November, 244,839* people were tested in the GGD test lanes, over 50,000 people less than in the week before. At least in part, this could be because people are having less contact with others, so fewer cold viruses are circulating. The test results for 243,341 people are known, and 35,349 people tested positive for COVID-19. The percentage of positive tests is still high (14.5%), but has decreased slightly compared to the previous week (Figure 2). 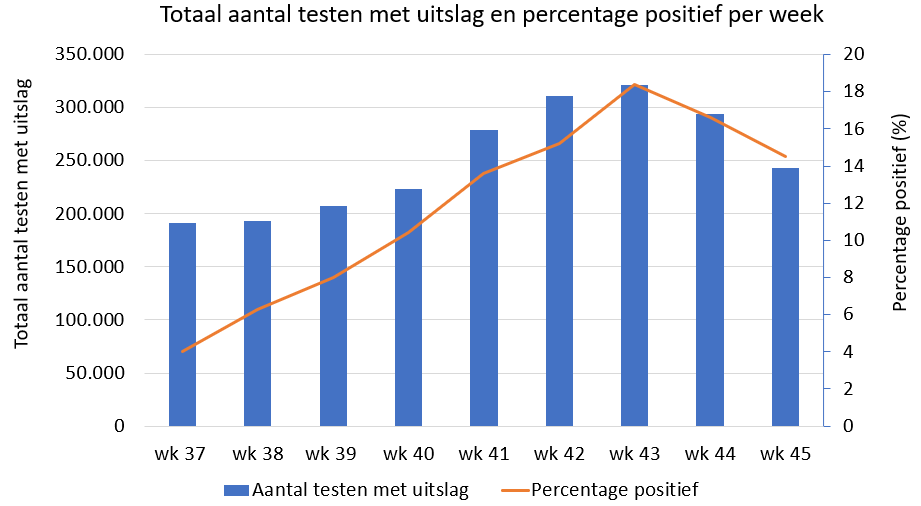 Monitoring the virus and testing outside the GGD test lanes

COVID-19 is a notifiable disease. It is legally required to report a positive COVID-19 test result to the Municipal Public Health Service (GGD). All parties that provide COVID-19 testing must comply with that legal requirement, including GGD test lanes, but also commercial test providers, GPs and hospitals. The Health Inspectorate oversees compliance. When providing the test numbers to RIVM, the GGDs do not differentiate between positive tests reported by the GGD test lanes or by others. Nearly 75% of all people who tested positive for COVID-19 and were reported to GGDs were tested in the GGD test lanes.
The data from the test lanes, laboratories, nursing homes, hospital admission figures, ICU admission figures and results of RIVM analysis consistently show the same overview: there has been a clear shift in the past week.

Continuing the trend of the previous weeks, Statistics Netherlands (CBS) reported a higher mortality rate than expected in the week of 26 October to 1 November.  In that week, approximately 700 more deaths were recorded than normally expected in this period. A significant percentage of the excess mortality is expected to be related to COVID-19. How high that percentage is will become clear later on in the records stating cause of death. RIVM also keeps track of mortality figures on a weekly basis (data provided in Dutch). In the most recent RIVM data for 22-28 October, mortality was significantly elevated in the age categories of 65-74 years and of 75 years and older. For the first time during the second wave, mortality was elevated in all regions of the Netherlands.

It continues to be important to always get tested if you have mild symptoms that could indicate COVID-19 – even if you think it might just be a common cold. To prevent the virus from continuing to spread, it is important for everyone to comply with the measures and the basic rules. Stay at least 1.5 metres from others. Work from home. If you have symptoms, stay home and get tested. Wash your hands frequently, especially when you arrive at home. Sneeze and cough into your elbow.