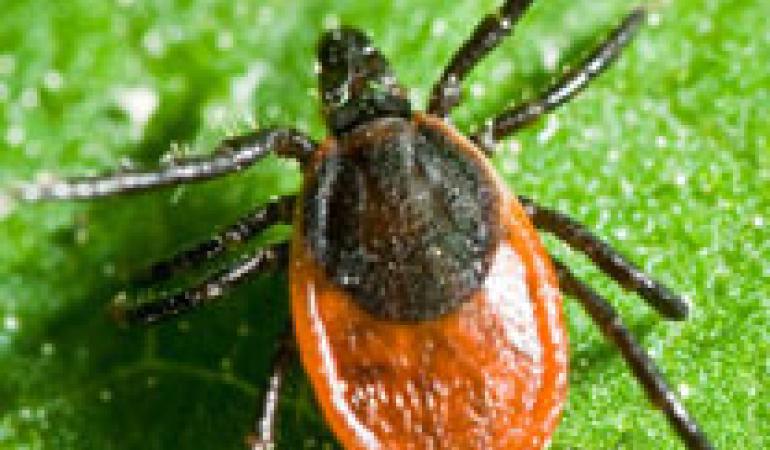 At the start of the “Tick Awareness Week”, the Dutch National Institute for Public Health and the Environment (RIVM) and Wageningen UR are commencing a large-scale study on the long-term effects of Lyme disease. Annually about 25,000 people are diagnosed with Lyme disease in The Netherlands. Although this number seems to be stabilising, the number of new patients remains high. Most people recover after a course of antibiotics, but 1,000 to 2,500 people a year continue to have persistent symptoms. Why these complaints develop in one person and not in the other, is unknown. Therefore, the study "Lyme Prospect” has started. People who are about to start a course of antibiotics against Lyme disease can apply for participation.

According to the latest survey, general practitioners (GPs) saw approximately 23,500 people with a red ring or spot-shaped rash on the skin (erythema migrans) in 2014. This rash is the most common signal of Lyme disease. In addition, about 1,400 people were diagnosed with other more serious forms of Lyme disease. The number of people who have reported the red skin rash increased slightly between 2009 and 2014 and may be stabilising. The number of people that came to the GP with a tick in their skin has decreased, presumably because people remove the tick themselves more often. Most often Lyme disease can be treated well.  A year after treatment about 1,000 to 2,500 people report prolonged symptoms such as fatigue, pain or difficulty concentrating. Why some patients develop such complaints and why these persist is not known.

To gain more insight into the causes of persistent symptoms after treatment for Lyme disease, the 'Lyme Prospect' research was launched. Anyone 18 years or older can sign up for this study if he or she is about to start antibiotic treatment against Lyme disease. Participation either through the GP or through http://www.tekenradar.nl//. Participants are asked to give blood,  and are asked to complete an online questionnaire about their health for a year, at the start and every three months. With the results of this study, researchers hope to gain insight why some patients develop complaints after treatment and why these symptoms persist.

13 -17 April is Tick Awareness Week in The Netherlands. As from this week, people are encouraged to do a thorough body check for ticks after being outdoors. Instructions are given on how to remove a tick and people are instructed to record date and location of tick bite. If rash or flu-like symptoms appear people are advised to contact their general practitioner immediately.

Dissemination of GP consultations for erythema migrans in the Netherlands from 1994 to 2014 (source: RIVM)