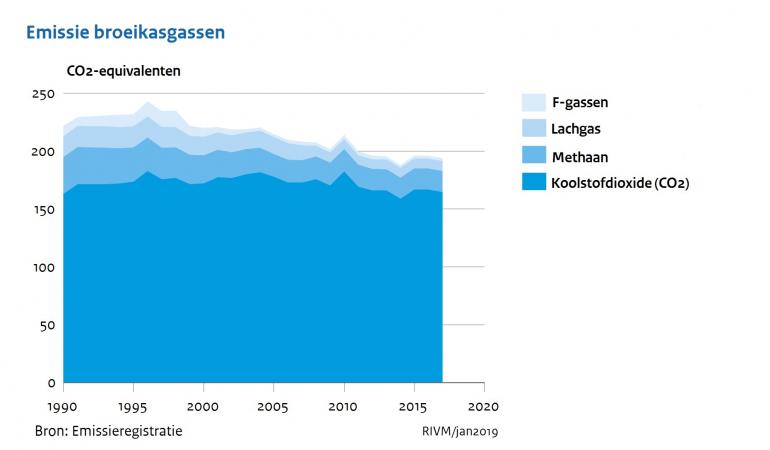 Dutch greenhouse gas emissions were 13 per cent lower in 2017 than in 1990. Emissions have been almost constant over the past five years. According to definitive figures from RIVM / Pollutant Release and Transfer Register and Statistics Netherlands (CBS), there was no decrease in CO2 emissions in 2017, compared to 1990. The data forms the basis for the internalisation of the short-term estimate for emissions and energy in 2020 by the Netherlands Environmental Assessment Agency (PBL).

The emission of the most important greenhouse gas CO2 in 2017 was a fraction (1 per cent) above the level of 1990. In recent years, the trend in CO2 emissions has been stable: apart from fluctuations, there was no increase or decrease.

CO2 emissions did not rise alongside economy growth which was 73 per cent over the period 1990-2017. Important factors for the reduction of CO2 emissions were the increase in the efficiency of power plants; more electricity production from wind and sun; less use of fossil fuels per kilometre travelled and better insulation and greater use of high-efficiency boilers in homes and company buildings. On the other hand, the growth of mobility and the increase in electricity production have led to more emissions.

The fall of all greenhouse gas emissions can be attributed to the decrease in other greenhouse gases: methane, nitrous oxide (nitrous oxide) and F-gases. The emission of methane and nitrous oxide decreased by 43 and 52 per cent respectively. The total emissions of F-gases were 76 per cent lower in 2017 than in 1990. These emission reductions are the result of measures of the Reduction Plan for Other Greenhouse Gases (1999-2012).

Total greenhouse gas emissions in 2017 were more than 1 per cent lower than a year earlier. This recent decline is because less coal has been used for electricity production.

With these new figures, the previously published preliminary figures are definitive. The figures are explained and broken down by sectors on the site of the Pollutant Release and Transfer Register Emission. A summary is shown on the Environmental Data Compendium.