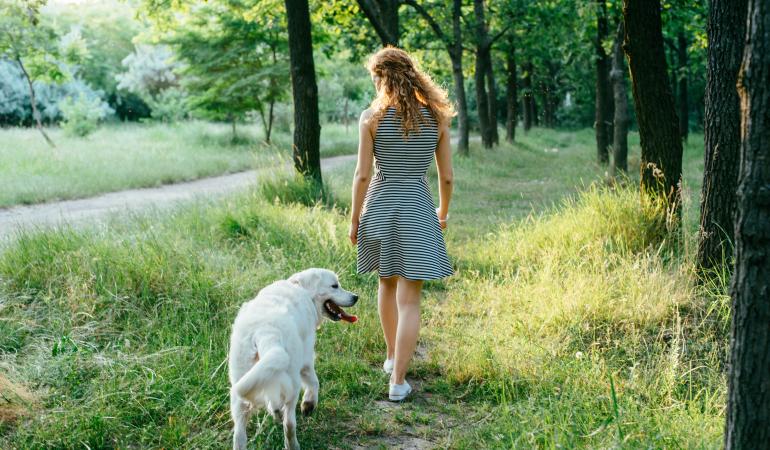 Every year about 1.5 million ticks bite someone in the Netherlands, especially between March and October. Most people will not get sick of that. Of the 100 people who get bitten, 2 to 3 get Lyme disease. In some regions of the Netherlands, ticks can also transmit the tick encephalitis (TBE) virus. Although the risk of contracting tick encephalitis after a tick bite is many times smaller than for Lyme disease, this is an additional reason to be alert for tick bites.

Since 2016, we know that ticks can be infected with the TBE virus in certain areas of the Netherlands. In areas where the TBE virus was found, approximately 1 in 1500 ticks were infected with this virus. This is significantly lower than the Borrelia bacterium, which is found in about one in five ticks. This Borrelia bacterium causes Lyme disease about 27,000 times every year. The risk of a TBE infection after a tick bite is much smaller than the risk of Lyme disease. In recent years, 1-2 patients a year have become ill due to the TBE virus in the Netherlands. The TBE virus is much more common in ticks in other European countries including Austria, Switzerland, Germany and the southern Scandinavian countries.

Where in the Netherlands does the TBE virus occur?

RIVM keeps track of the number of patients who become seriously ill as a result of a TBE virus infection contracted in the Netherlands. We are also investigating the spread of the TBE virus in wild animals and ticks, in collaboration with DWHC, WUR and Artemis. We know that seven patients contracted tick encephalitis between 2016 and 2019. The most likely places of infection are the Sallandse Heuvelrug, the Utrechtse Heuvelrug, Twente and the Achterhoek (see attached map). At the border with Germany in the Achterhoek and east of Nijmegen, the TBE virus was found in small rodents. Research on antibodies shows that ticks with the TBE-virus have bitten roe deer in Noord-Brabant, Limburg, Overijssel and the Achterhoek. Further research is ongoing into the spread and ecology of the TBE virus in the Netherlands. 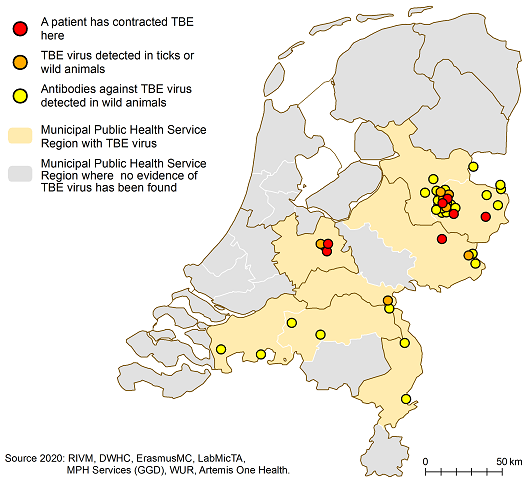 Most people will not become ill if they are infected with the TBE virus. Sometimes it causes mild flu-like symptoms and fever shortly after the tick bite. Even less often, the TBE virus causes inflammation in the brain, meninges or spinal cord. People with these severe symptoms very rarely die from this disease.

If you have been out in the greenery or countryside, check yourself for tick bites and remove ticks immediately to prevent Lyme disease. Look here how to remove a tick (in Dutch).

Ticks transmit pathogens from animal to animal and sometimes to humans. Of the 100 people who are bitten, 2 to 3 get Lyme disease. A rash is the most common early sign of Lyme disease. It can appear on the spot of the bite up to three months after a tick bite. If this occurs, contact your general practitioner (GP).
Also contact your GP if you have a fever, severe headache or other symptoms in the days after a tick bite.  These symptoms can sometimes indicate Lyme disease or tick-borne encephalitis.

More than a thousand people have participated in our research into diseases caused by tick bites. Report tick bites and a fever on Tekenradar.nl and participate in research. The researchers examine how often a pathogen can be found in people with a fever after a tick bite, including TBE virus.