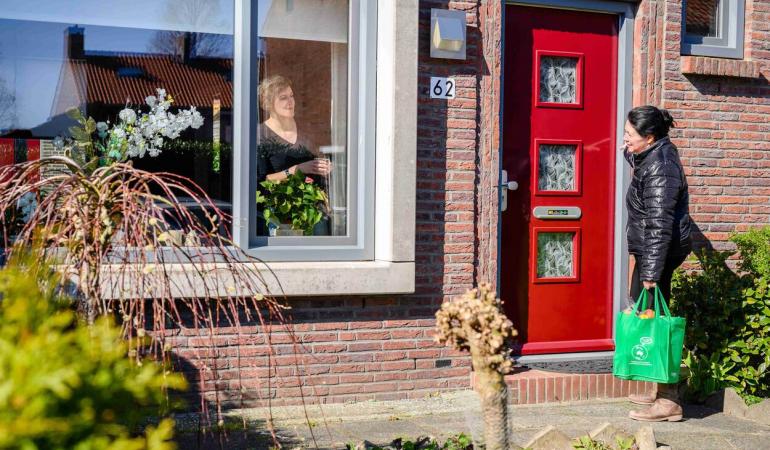 Staying 1.5 metres apart seems to be more and more difficult for people to manage. People with a higher risk of serious illness from a coronavirus infection are generally better at following the measures. Support for hygiene measures, staying home for cold symptoms, and physical distancing remains unchanged at 90-95%. This was clear from the second behavioural study conducted by RIVM, the Netherlands Municipal Public Health Services and Medical Assistance in Accidents and Disasters (GGD-GHOR) and the regional public health services (GGDs).

Despite that, it seems more difficult for people to maintain a distance of 1.5 metres. Compared to mid-April, the number of people who say that others seldom or never come within 1.5 metres of them is decreasing for work (-5%), shopping (-9%) and visiting family and friends (-12%). There is also an increase in the number of people indicating that distancing is difficult or very difficult (+5%).

In the second part of the behavioural science study by RIVM and municipal health services focusing on COVID-19 prevention, the researchers also looked at factors that predict how people respond to the behavioural guidelines. Researchers looked at the hygiene measures (washing hands for 20 seconds, sneezing into the elbow, using paper tissues), avoiding visits to the elderly and people whose health is more fragile, and staying 1.5 metres apart.

The results show that people who feel threatened by the virus and are concerned about it follow the behavioural guidelines more closely. People who indicate that they have confidence in the effectiveness of the measures, and that they themselves are able to implement them properly, were also more likely to be following the measures two weeks later. This is in line with important behavioural models that therefore also seem useful for understanding behaviour during this pandemic.
Although the differences are not dramatic, people whose health is more fragile report that they are more likely to follow hygiene measures and stay 1.5 metres apart. That also applies to people over the age of 70, who are less likely to visit people whose health is more fragile. It seems that older people and people whose health is more fragile are following the behavioural guidelines more closely.

The instruction “avoid crowds” has been well received as a replacement for “stay home as much as possible”. As many as 95% support this new behavioural rule, compared to 82% for “stay at home as much as possible” in the previous survey. Just as in the first survey, overall support is high for such rules as the hygiene measures (90-95%), staying 1.5m apart (93%), and staying home in case of cold symptoms (92%). The rules and recommendations that limit our social life are less supported. That includes minimising visitors to the home (80%) and working from home as much as possible (81%). The least popular is the rule stating that 1 or 2 designated individuals are allowed to visit people over the age of 70 (71% support this measure).

The study also reveals ambiguities. For example, it is striking that people who believe that they have a higher risk of becoming infected are more likely to adhere to the hygiene measures, but are less likely to keep 1.5 metres from others. This may be explained by the fact that these people find it difficult to maintain a distance of 1.5 meters themselves, and therefore think that the risk of infection is higher. RIVM hopes to provide more insight on this matter through in-depth research.

Research on behaviour and well-being during corona

In order to gain a better understanding of people’s thoughts about the measures that were announced, what motivates them to comply, and how people are affected, a major study has been launched by RIVM, the Netherlands Municipal Public Health Services and Medical Assistance in Accidents and Disasters (GGD-GHOR) and the regional public health services (GGDs). The study explores human behaviour, what people think of the government’s behavioural measures, and how they are doing physically, mentally and socially in these corona times. The results come from the second survey of 53,000 people in week 21/22 (from 7-12 May). These are people who also participated in the first survey in mid-April. The third survey will take place at the end of May.

The study was made possible by funding from the Netherlands Organisation for Scientific Research (NWO) and the Netherlands Organisation for Health Research and Development (ZonMw), with advisory support from the Scientific Advisory Council to the Corona Behavioural Unit at RIVM. In addition to this survey-based study, RIVM also conducts research in other ways in order to gain more insight into population groups that do not take part in this survey, or do so to a lesser extent.