The first round of the PIENTER Corona Study was in April and May 2020. In total, more than 3,200 blood samples were examined in this round. In the second round, in June and July 2020, RIVMNational Institute for Public Health and the Environment examined more than 7,300 samples. The third round of the PIENTER Corona Study took place in September and October 2020. The fourth round was in February and March 2021. Both round 3 and round 4 examined about 6,500 blood samples. In each round, slightly more than half of the blood samples generally came from women. Also, there are usually slightly more older participants than younger ones. This is taken into account in our analyses.

People who have antibodies

The research results show what percentage of the general population in the Netherlands has generated antibodies against the coronavirus (SARS-CoV-2) that causes COVID-19. This allows us to estimate the number of people who have built up immunity to the virus due to infection, and (since the vaccination campaign started in 2021) due to vaccination. This is known as seroprevalence. During the first round of research in the spring of 2020, this was just under 3%. In the second round in the summer, it rose to 4.5%, reaching approximately 5% during the third round of the study in autumn 2020. In February 2021, seroprevalence had risen to over 14%. A distinction can be made here between participants who had antibodies due to a coronavirus infection (~12%) and participants who had antibodies resulting from vaccination (~2%). At the national level, there were no differences between men and women, or between people from different ethnic backgrounds.

Based on the second round of the study, we were able to show that social distancing is an important measure in stopping the spread of the virus. Participants who had followed the recommendation to stay 1.5 metres apart were less likely to have antibodies in their blood during the first wave, while antibodies were found in the blood of 5.5% of the participants who were less compliant with the distancing rule. Antibodies were only found in the blood of 4% of people who did keep their distance during contact with others. Participants who mostly had contact with children under the age of 10 were hardly ever infected during those encounters. Participants who indicated that they had an occupation involving physical contact with children were not more likely to be infected. Group size also proved to be an important predictor of infection. Antibodies were found in the blood of 6.2% of the participants who had attended a meeting or gathering (involving more than 20 people) in an indoor environment during the first wave. This was almost 1.5 times more often than people who had not attended meetings at all (4.2%). Other conclusions drawn from the analyses can be read in the scientific article.

Age distribution of people who have antibodies

The figure below show the percentage of participants with antibodies distributed across the age groups in the population (from 1 up to 91 years old) after the first wave in 2020. The research data is then converted for extrapolation and applied to the general population. An estimate is provided for the percentage of the Dutch population that has been in contact with the coronavirus in each age group. Since the fourth round in February 2021, a distinction is also made based on immunity as a result of vaccination.

The charts presenting the age distribution of people who have antibodies all show similar patterns. In each round, young adults had the highest percentage: in the fourth round, about 25% of that age group had antibodies. Among children of primary school age, the percentage in the fourth round rose slightly compared to the previous round, but still remains lower than older age groups. During the fourth round of research, no participants had been vaccinated in the age groups of people aged 70-75 years or children under 18. Most of the vaccinated adults in the professional population at that time consisted of care workers. 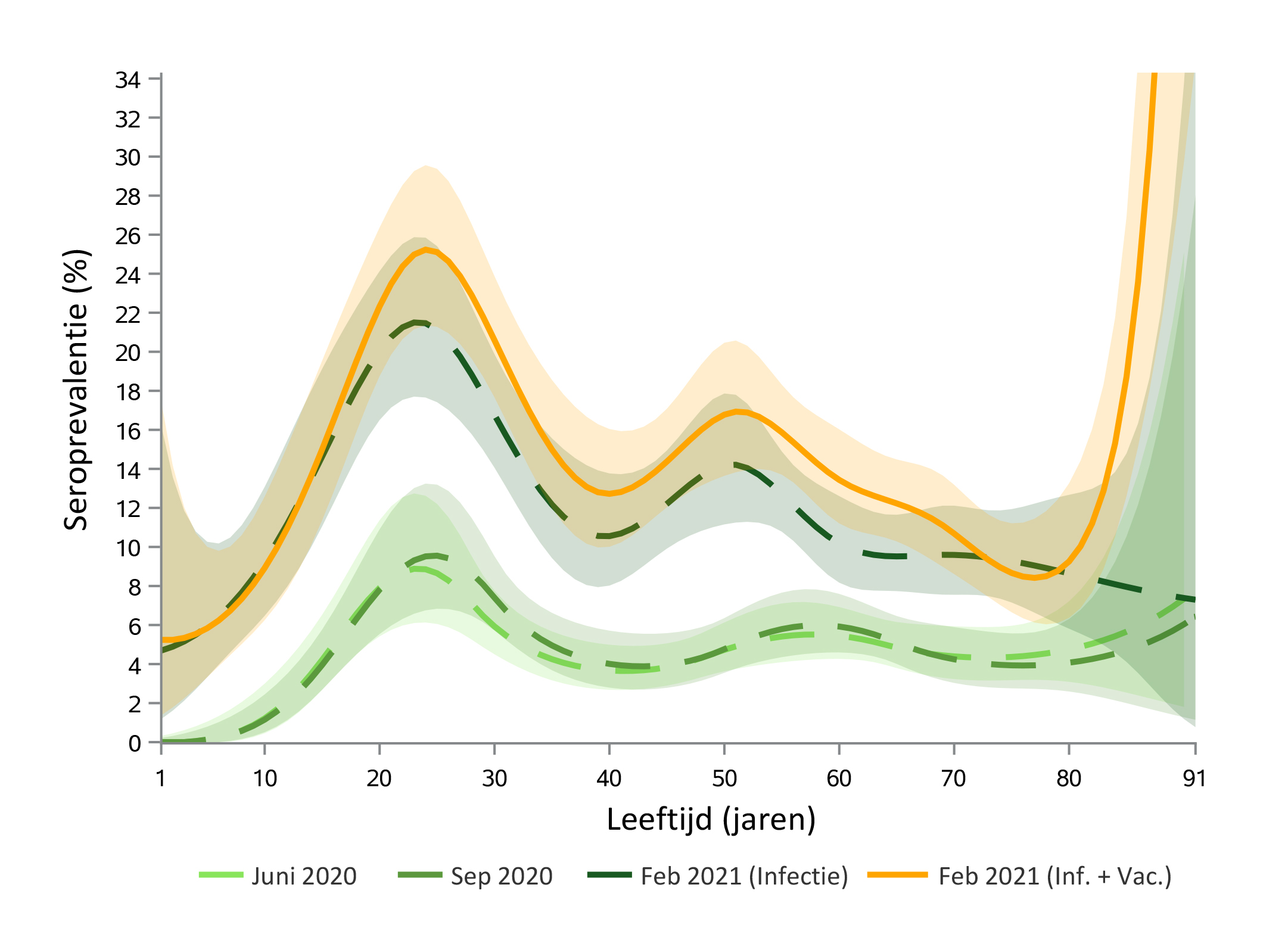 Figure 1: Percentage of people who have antibodies by age over time (rounds 2-4). The orange line shows total seroprevalence after infection and vaccination in round 4 (February/March 2021).

Regional distribution of people who have antibodies

The study also looks at the spread of the virus throughout the Netherlands. The figure below shows the percentage of participants per GGD region that had the virus since the first wave. A lighter colour (light orange) means a lower percentage per region on average, while a darker colour (dark red) means a higher percentage per region on average (up to 24%).
These results clearly show that the prevalence of antibodies during the first wave was lower in the northern provinces than in the central regions, and much lower compared to the south of the Netherlands. Although seroprevalence was still highest in the southern provinces after the second wave (round 4 – February/March 2021), the difference compared to the other regions had decreased somewhat, with the strongest increases in the GGD regions of Twente, Zuid-Holland-Zuid and Zuid-Limburg.

Figure 2: Percentage of people who have antibodies due to infection, over time (rounds 2-4), by GGD region.

The figure below illustrates the total percentage of people who have antibodies due to infection and vaccination in the fourth round (February/March 2021) (on a scale of 0 to 100%), by GGD region. 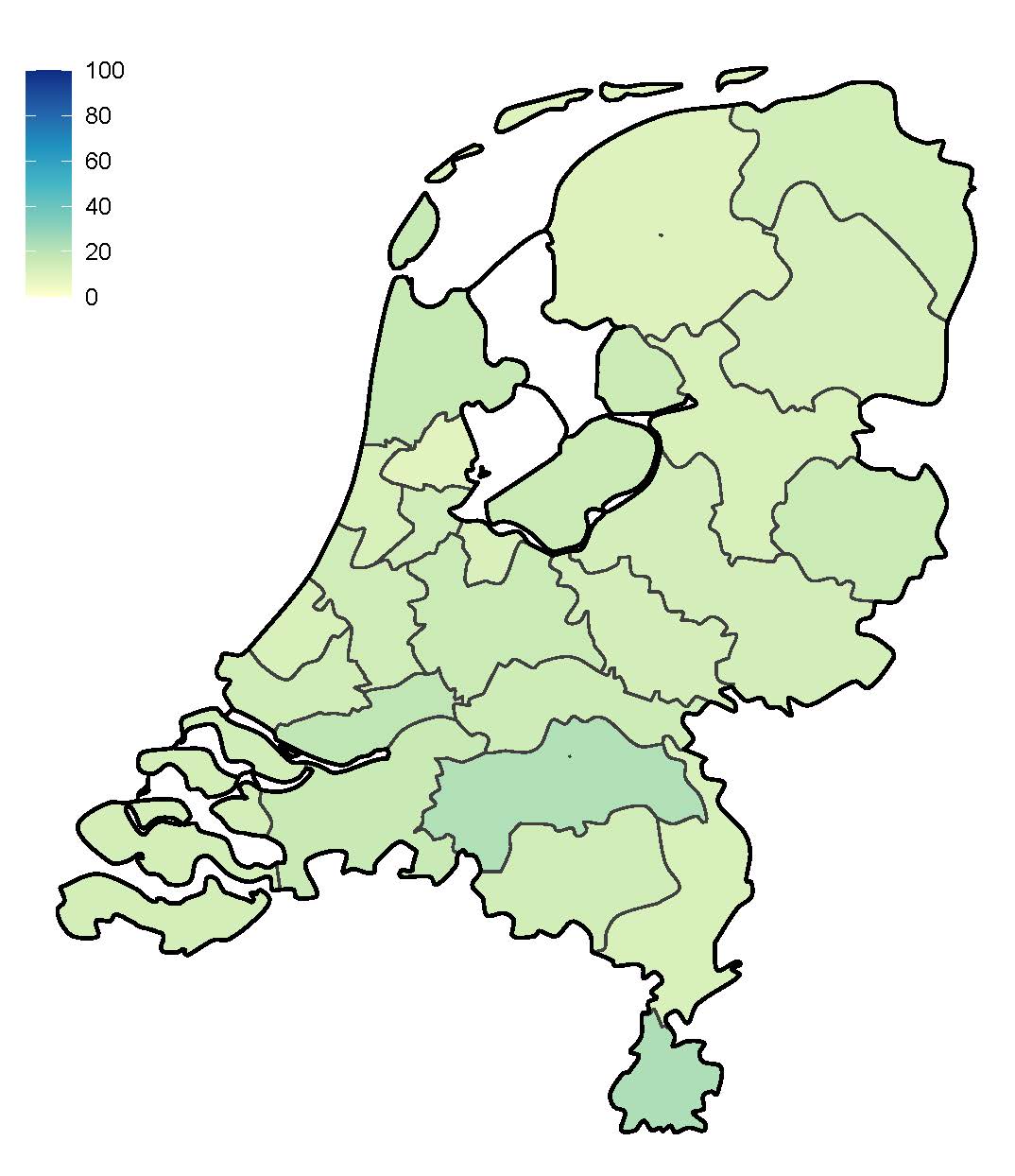 Figure 3: Total percentage of people who have antibodies due to infection and vaccination in round 4 (February/March 2021) (scale 0–100%), by GGD region.

Table 1: Percentage of symptoms reported by seropositive and seronegative participants in round 1.

Number of participants per municipality

The figure below show the number of participants who provided a blood sample, representing the various municipalities in the Netherlands. The larger the blue dot, the more people from this municipality sent in a blood sample. The distribution of blood samples for each municipality shows some correlation to the population distribution in the Netherlands: more people from the Randstad conurbation took part in the study. The research results are analysed with due consideration of differences in the participants’ gender, age, region and ethnic background. 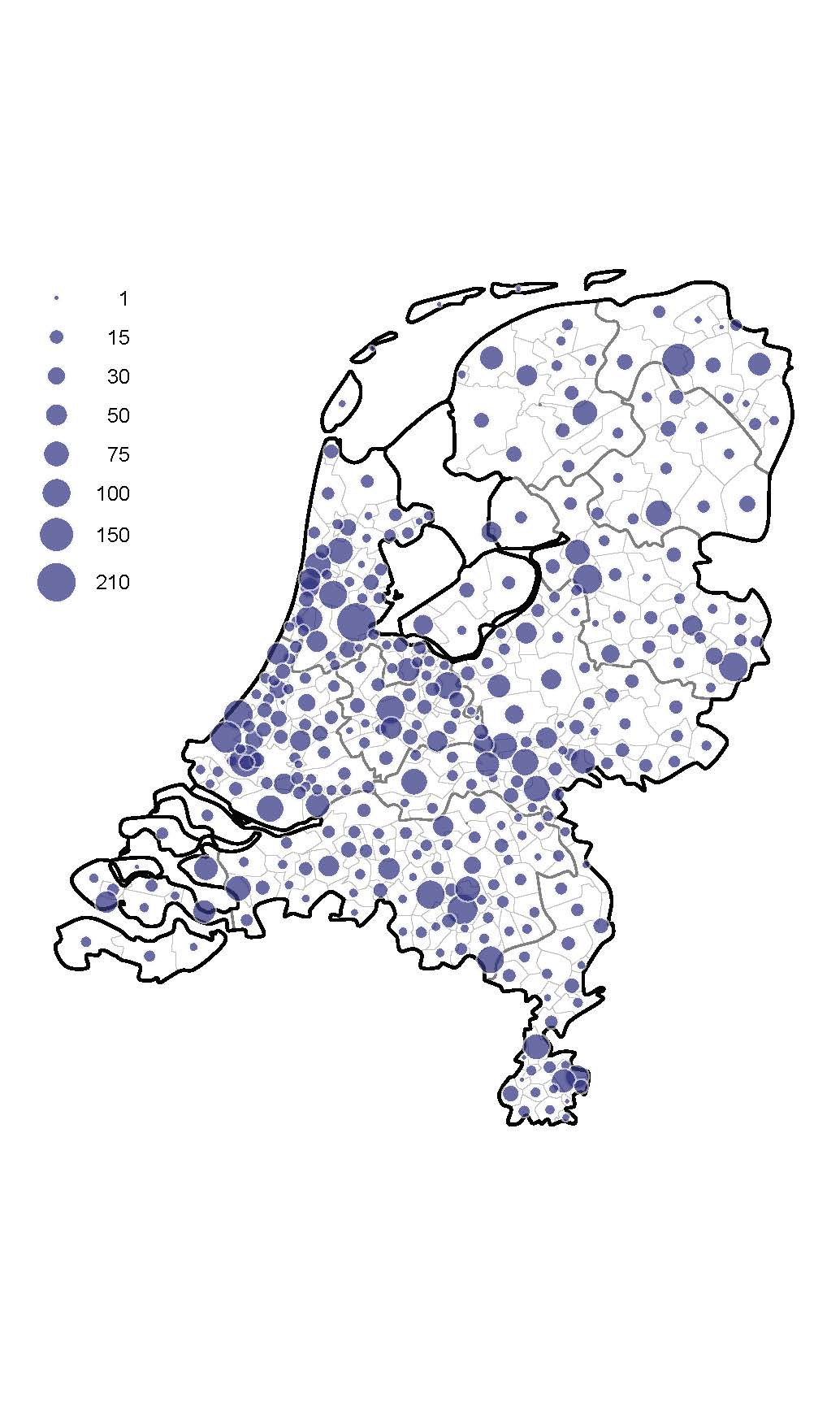 Figure 4: Number of participants per municipality.

The results of the PIENTER Corona Study will be presented in scientific articles for publication, so they can be read by everyone. As a result, other countries can also benefit from the research and use key findings in formulating their public health policies. When articles are published online, they will be posted on this page.

Analysis of SARS-CoV-2 seroprevalence and risk factors, as well as symptoms in relation to antibody levels after infection during the first wave (based on data from round 1):
Vos ERA, den Hartog G, Schepp RM, et al. Nationwide seroprevalence of SARS-CoV-2 and identification of risk factors in the general population of the Netherlands during the first epidemic wave. Journal of Epidemiology and Community Health. 2020:jech-2020-215678.

The effect of social distancing on contact patterns in the population (based on data from rounds 1 and 2):
Backer JA, Mollema L, Vos ER, et al. Impact of physical distancing measures against COVID-19 on contacts and mixing patterns: repeated cross-sectional surveys, the Netherlands, 2016–17, April 2020 and June 2020. Eurosurveillance. 2021;26(8):2000994.

Estimated proportion of asymptomatic SARS-CoV-2 infections in the population (based on data from the PIENTER3 study, and from PIENTER Corona rounds 1 and 2):
McDonald SA, Miura F, Vos ERA, et al. Estimating the asymptomatic proportion of SARS-CoV-2 infection in the general population: Analysis of nationwide serosurvey data in the Netherlands. European Journal of Epidemiology. 2021;