Human activities result in the release of both microbial and chemical contaminants into the aquatic environment, which may be a threat to human and environmental health. Newly recognised potential hazards in the aquatic environment are often referred to as emerging contaminants. During the last decades, new risks for drinking water resource quality frequently emerged due to the increased sensitivity of our analytical techniques and climatological, technical, societal and demographic changes.

Project PS-Drink was initiated to enable a more proactive, integrated and systematic assessment of emerging drinking water contaminants. The project is a collaboration between RIVM, Utrecht University and Delft University of Technology. The objective was (1) to develop an integrated methodology for the systematic identification, assessment and prioritisation of emerging chemical and microbial risks to the production and supply of safe drinking water and (2) to develop effective strategies to communicate such risks. The project started in the summer of 2016 and will end by December 2020. 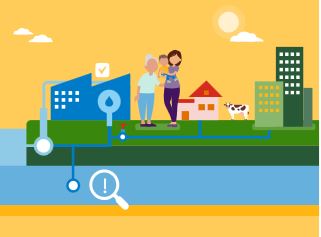 In the second stage of the project, a new early warning system was developed based on the systematic search of the universal scientific literature for articles reporting the first detection of a contaminant in the aquatic environment. It is known that it takes about 15 years from the first scientific publication about a contaminant to a peak number of publications. This peak is in many cases associated with regulatory or mitigation actions, meaning a late response. Screening the scientific literature for early signals of new contaminants, by using literature mining as an early warning system, can be effective to shorten the period of emerging concern.

For the quality of their drinking water, consumers rely on science to identify and monitor hazards, determine health risks and inform them about potential health threats and on policymakers to regulate these threats. Frequently, consumers are confronted with information stating that a hazardous substance has been detected in drinking water resources but that this presence does not constitute a risk to public health because the doses do not exceed the safety levels. While experts may be familiar with such statements, public understanding of these risk statements generally does not correspond with the scientific interpretation.  In this study, we tested the effectivity of textual and visual risk communication materials about emerging contaminants in drinking water. Information needs of consumers were identified using interviews and questionnaires. Based on the identified information needs, an existing web text was revised and tested in a consumer panel. Also, an accompanying infographic explaining the risk assessment process was developed and tested.

The research performed on finding effective strategies for communication on emerging drinking water risks was published in a scientific article.

PS-DRINK has made it to round two of the International Water Association Project Innovation Awards. These awards recognise and promote excellence and innovation in water management, research and technology and are awarded biennially at the IWA World Water Congress & Exhibition.

Over the duration of the project, four workshops with stakeholders from industry, research and policy were organised. These workshops aimed to keep stakeholders actively involved in order to facilitate the take-up of the developed methodologies. Reports of the workshops are available in Dutch.

The research performed within the PS-DRINK project was presented during the following international conferences: