An assessment is defined by specifying input for all model parameters in ConsExpo nano. Values can be single (point) values in which case a deterministic evaluation is performed: ConsExpo nano provides single numbers as an estimate of exposure. Alternatively, probabilistic assessments  can be conducted. This is done by providing a probability distribution as input. A set of parameters feature a button next to the value edit control. Pressing this, opens a distribution editor where distributions can be specified. For a description of the supported distributions and the parameters they require for input, see probabilistic evaluations in “Modelling exposure to nanomaterials in spray products ”.

The top most section features:

Local file management
The user may store and retrieve assessments via the ‘import’ and  ‘export’ buttons.

Inclusion of a hazard study in the simulation
Via the ‘include hazard study’ check box, the user may include a retained dose simulation from dose-response study in rat. Doing so allows the comparison of human and rat doses on any dose metric and normalisation, to better gauge the human exposure with doses at which toxicological responses are observed in the rat.

Monte Carlo settings
When at least one of the input parameters in the ‘Exposure’ settings has been quantified using a probability distribution, this section becomes visible. Here, the number of Monte Carlo samples is specified. Note that a Monte Carlo simulation cannot be conducted in conjunction with a ‘hazard study’.

In the ‘Exposure’ section of the input, the human exposure assesment factors are specified. The exposure section consists of different sub sections, that refer to different aspects of the assessment. 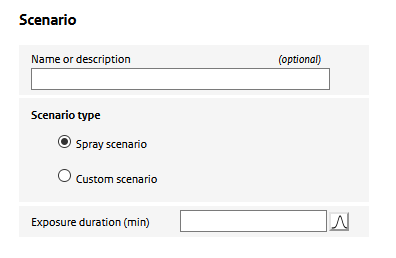 In case of a ‘custom scenario’, the user is asked to specify an ‘air concentration’, In the ‘exposure to spray’ option, the air concencentration is simulated using the ConsExpo spray model. To parameterize this model, special sections (‘spray’, ’usage’ and ‘room’) for parametrizing the model are enabled.

Also in this section, the user specifies the exposure duration:  the period a person is present in the room where the spray was used. In this period the person is potentially exposed to the aerosol (and nano-) particles released from the spray. 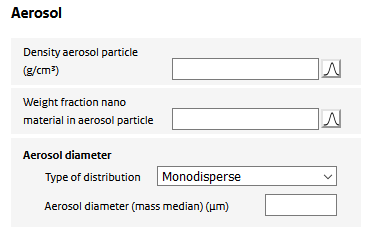 Upon spraying, the nanomaterial is assumed to be dispersed in indoor are as part of particles in the generated aerosol. For the model calculations, the aerosol containing the nano material is to be characterized. The following input is required:

A ‘non-parametric’ distribution enables the use of raw measurement data. Input can be uploaded using a text file from the local file system by pressing the ‘manage’ button. This button becomes accessible after selection of ‘non-parametric’.

To upload a non-parametric distribution, a text file should be prepared according to the following format: 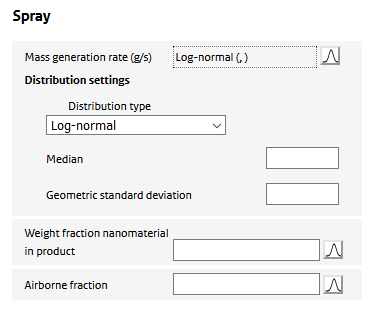 In case the scenario type ‘exposure to spray’ is used to simulate exposure, characteristics of the spray product and how it is used are needed. The spray product and use parameters determine the amount of material that becomes available for inhalation.

The amount released from a spray is determined by its mass generation rate and the time duration of the use of the spray (i.e. how long the product is sprayed.) The emitted product will be a mixture of various compounds such as propellants, solvents and the nanomaterial itself. Only the non-volatile components of the product will end up as airborne aerosol particles as the volatile components will vaporize and be released as a gas.

To specify the product the following input is required:

Mass generation rate
The amount of product released per unit time. The product will generally contain different components (e.g. propellant gas, solvents, the (non-volatile) nanomaterial itself.) The mass generation refers to the mass of this complete mixture. It is the value that would be measured when measuring the spray before use and after use divided by the time it was operated.

Weight fraction nanomaterial
The fraction of the nanomaterial mass of the total product mass (as it is contained in the spray can).

Airborne fraction
The fraction that accounts for the fact that in using a spray on a surface, only part of the spray will end up as airborne aerosol, as the bulk of the material will end up on the treated surface. For an air space application (e.g. spray against flying insects, air freshener) the fraction will be close to 1. For a surface spray (e.g. a plant spray, all-purpose cleaner), this fraction will be much lower. See  (Delmaar & Bremmer, 2010) for estimated values for this parameter for different sprays.

Usage of the spray determines for a large part the exposure potential. ‘Usage’ parameters define how long a spray is used, the proximity of use to the exposed person, and how much of the sprayed aerosol particles end up in the room air.

Spraying towards exposed person
This option allows to account for the situation in which the spray is used directly in the breathing zone of the exposed person (e.g. for a hair spray or deodorant.)

Consumer sprays are assumed to be used indoors. Features of the indoor environment such as room size and ventilation determine to a large extent the resulting aerosol air concentrations. The following parameters need to be specified:

Room volume
The volume of the room where the spray is used. The sprayed aerosol is assumed to be homogeneously distributed throughout the room after spraying.

Ventilation rate
The number of times the air in the room is refreshed per hour. 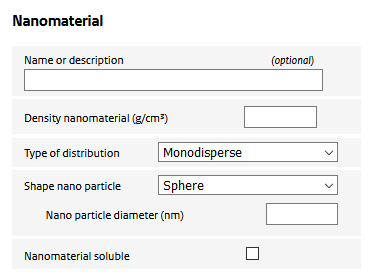 Type of distribution
The geometry of the nano material is defined by the shape and size of the constituting nano particles. The size may be represented by a single number (a ‘monodisperse’ distribution) or as a (mass-based) lognormal distribution.

In this section, the user specifies details of the simulation. Input for the following parameters needs to be provided:

Simulation duration
The total period the load in the alveoli is to be estimated. Note that the clearance of non-soluble particulate matter from the lung is generally slow and residues of inhaled material may be present in the alveoli for substantial time after the actual exposure has taken place.

Exposure pattern
This parameter defines whether the exposure takes place repeatedly or not. Options are: 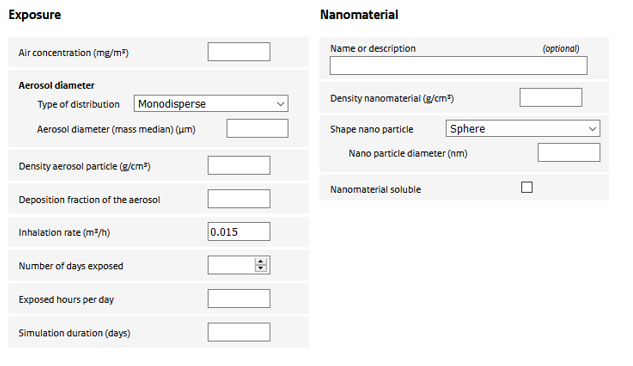 If, in the ‘gerenal assessment settings’ it has been indicated that a hazard study should be included,  the retained dose in a rat (dose-response) study will be simulated along with the human retained dose. This allows for a more direct comparison of man and rat exposures.

The following input is required:

Aerosol diameter
The diameter of the aerosol. Can be a single value or a distribution.

Number of days exposed
The number of days the animals were exposed in the experiment. Note that the experimental exposure is assumed to have been continuous. If, for example, an exposure regime of 5 days a week, 6 hours a day) was applied, this should be accounted for in ConsExpo nano by simulating 7 days in the week, but adjusting the exposure hours per day so that the total hours correspond to the study (in the example, the number of hours should be set to 5/7 x 6 = 4.3 hours).

Exposed hours per day
Number of hours the animals have been exposed on an exposure day.

Simulation duration
Total number of days the simulation needs to cover. This may include an exposure and a post-exposure (recovery) period.

Inhaled dose per event
The total dose of aerosol that is inhaled during a single exposure event. The dose is expressed in different dose measures. For repeated exposure events, the same inhaled dose for each event is assumed.

Alveolar dose per event
The dose of aerosol that, after inhalation in a single exposure event, deposits in the alveoli.

Dose-time plots
In this section of the output, important exposure estimates are displayed as a function of time. The first graph plots the inhaled and alveolar dose during a single exposure event versus time. The time ranges from zero (the start of the exposure event) to the exposure duration. The second graph shows the alveolar load over the simulation duration. For both graphs the dose measure may be chosen from a drop-down list. Finally, if the solubility of the material is simulated, a graph will appear that shows the (cumulative) amount of nanomaterial that has dissolved in the alveoli since the start of the simulation. Note that the fate (e.g. interstitialisation or systemic uptake) of the dissolved nanomaterial is not considered in the ConsExpo nano tool. The graph is to be interpreted strictly as the amount of nanomaterial (and only nanomaterial) that is present in the alveoli at any particular time.  If a simulation of a hazard study is included an additional graph will show the retained dose in the rat alveolar region, for the same dose metric and normalisation as selected for the human. The dose-time plots are not shown for probabilistic simulations.