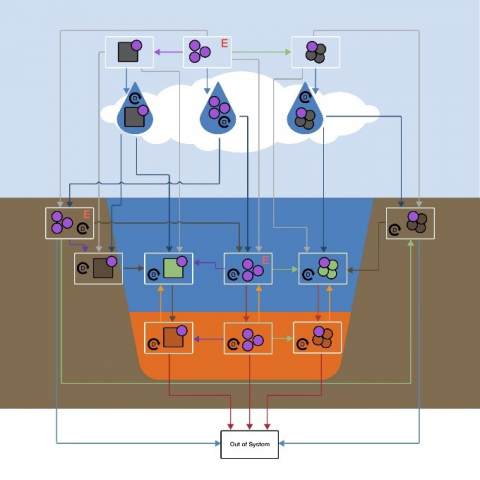 Just like SimpleBox, it is a first-principles model, in the sense that it derives mass flow rates taking into account both physical and chemical substance properties and characteristics of the environment modelled. It takes user-specified release rates of the chemical into the environment as input, and produces exposure concentrations in the different compartments of the environment as output. This type of model is known as a ‘Mackay model’, after its inventor, Donald Mackay.

SimpleBox is operated as Microsoft Excel spreadsheet for calculating steady state concentrations. Supported by numerical computations in R a dynamic analysis can be performed and time specific concentrations calculated. Documentation on the SimpleBox4nano model concept is described in various publications[1,2,3].

SimpleBox has served as 'regional distribution module' in the European Union System for the Evaluation of Substances (EUSES). The tool for conventional substances is currently used as part of the CHESAR tool, hosted by the European Chemicals Agency [4] to demonstrate possibilities for 'safe use' of chemicals, which is required for registration of chemical substances under REACH. SimpleBox and SimpleBox4nano also serves as fate module in Life Cycle Impact Assessment models [5,6].

Designed originally as a research tool, SimpleBox has proven most useful in dedicated environmental fate studies, focused at understanding and predicting environmental fate from fundamental physical and chemical substance properties. An proof of concept SimpleBox4nano R package was developed for research purposes.

The SimpleBox spreadsheet model (v20190830) and its documentation files are freely available for non-commercial use. Download the SimpleBox4nano tool after filling in a short registration form.  After submitting the form, you can download the tool immediately. For more information, please contact joris.quik@rivm.nl.