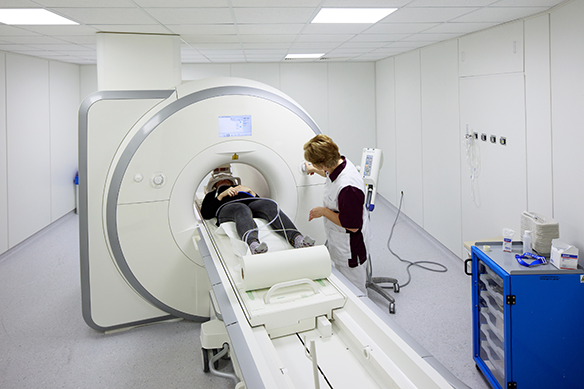 Electric, magnetic and electromagnetic fields (EMF) with frequencies between 0 and 300 gigahertz can be used in hospitals for diagnostic or therapeutic purposes. The most important diagnostic application of EMF is magnetic resonance imaging (MRI), which uses static magnetic, low frequency and radiofrequency EMF. Established therapeutic applications of EMF include transcranial magnetic stimulation and diathermy. Fields with frequencies between between 300 gigahertz and 3 x 1015 hertz are usually called optical radiation. This frequency band incorporates infrared radiation, visible light and ultraviolet radiation. Lasers emit optical radiation of one frequency with high power in a small surface area. Because of its relatively low penetration depth, optical radiation is mostly used for imaging microscopic structures of superficial tissue layers such as the skin or the gut wall. Therapeutic applications of optical radiation include lasers for surgery and ablation and ultraviolet irradiation for skin disorders.

Possible sensory and health effects of strong static magnetic fields and low frequency EMF are vertigo, nausea and nerve stimulation. A possible health effects of strong radiofrequency EMF and optical radiation is heat-related damage, in particular to the eyes. Strong UV-radiation can also increase the risk of skin cancer. Health care workers in the Netherlands are protected against the risks of EMF and optical radiation by the implementation of European directives 20013/35/EU and 2006/25/EC in the working conditions decree (in Dutch). Although the exposure of patients may exceed the limits for the general population or for workers, the physician has to weigh the potential health risks against the benefits of diagnosis or treatment. EMF, infrared radiation and visible light do not cause DNA-damage, in contrast to ionising radiation used in X-rays or computed tomography (CT). However, because different diagnostic techniques give different information about the body's interior, the ultimate choice also depends on the diagnostic aim.

RIVM has participated in working groups of the International Commission for Non-Ionizing Radiation Protection (ICNIRP)  on general radiation protection principles, medical diagnostic exposure and cosmetic exposure to EMF and optical radiation. RIVM also contributes to the activities of the Health Council of the Netherlands  and the New and Emerging Technologies Working Group of the European Commission. RIVM occasionally contributes to ad hoc risk assessment projects such as the Environmental Health Criteria of the World Health Organization and the report on Health Canada's radiofrequency exposure limits  of the Royal Society of Canada (2013).