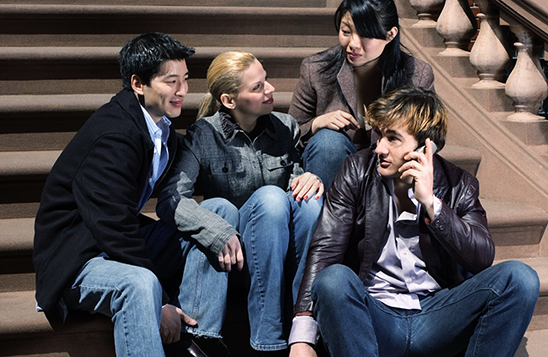 Long-term health effects are not well understood. Research into possible long-term health effects of (long-lasting) exposure to EMF below the exposure limits is still ongoing. Scientific studies that compare groups of children who live near and far away from an overhead power line have indicated that the children exposed to magnetic fields above 0.3 to 0.4 microtesla may have a greater chance of getting leukaemia. The magnetic field due to the power line possibly plays a role in this greater chance, but there is no proof for a causal relationship. There is also no proof for a causal relationship between exposure to radiofrequency electromagnetic field from cell phones and occurrence of cancer in the head such as glioma. There is ongoing research on possible non-specific health effects such as fatigue, loss of concentration, sleep disturbance, headache and 'electrohypersensitivity'. However, a causal relationship with EMF exposure has not been established.

RIVM has performed research on the following topics: sources of electromagnetic fields and exposure of people; research into exposure and effects on people (in the Programme Electromagnetic Fields and Health of the Netherlands Organisation for Health Research and Development (ZonMw)); Comparison of international EMF policies.

RIVM has also conducted research on everyday exposure. For radiofrequency sources, such as radio, television and telecommunication, the exposure was assessed in 39 different microenvironments or activities in the Netherlands. Volunteers wore a measurement set on the body consisting of a time-activity diary, an exposimeter for radiofrequency fields measuring in 12 frequency bands, a broadband exposimeter for low frequency magnetic fields (40-1000 hertz) and a GPS-logger. The averaged individual arithmetic mean exposure over 24 hours was 0.18 milliwatt per square metre with a range of 0.015 to 2.37 milliwatt per square metre. Based on a questionnaire on the activities and these measurements, the exposure of large groups of people was predicted. This modelled exposure was applied in epidemiological research to investigate whether an association exists between certain types of exposure and health effects. Repeated measurements by, among others, the Radiocommunications Agency Netherlands and Utrecht University, show that due to increased usage of new types of communication devices the exposure has increased as well, though it remains below the reference levels.

Exposure from sources of low frequency magnetic fields was assessed in a similar way. Daily activities leading to the highest exposure were: sleeping, electric ironing, and cooking with electric appliances. The highest contribution during sleeping was from electric alarm clocks and chargers for mobile phones. The individual averaged daily exposure under 96 volunteers ranged from 0.013 to 2.03 microtesla. The arithmetic mean exposure of the volunteers was 0.132 microtesla. The exposure seemed to be constant over the past five years or decreased in some cases. Apart from measurement surveys on individual exposure, RIVM and the Radiocommunications Agency also cooperated on calibration of measurement devices and on the development of new innovative measurement methods. For instance, we used car-mounted mobile measurements in city streets and main motorways, used for radio-frequency spectrum regulation, for exposure assessments in epidemiological studies. In this way the temporal trend in exposure level or frequencies can be monitored for a particular area. It also provides the means to compare differences in exposure with differences in occurrence of health effects between areas. RIVM also validates exposure models with measurements for low frequency magnetic fields near powerlines and radiofrequency fields from transmitters and broadcasting in daily life.

The public exposure to EMF depends on where people are and what they do. It is therefore not easy to make a statement about the strength of the fields to which an individual is exposed. RIVM performed several (inter)national studies, in which the strength of the fields was measured or calculated for certain types of sites (also called micro-environments) and for daily activities. Based on the time people spend on an activity or are in a micro-environment, an average exposure can be determined. The measurements showed that the highest exposure to low frequency magnetic fields (50 hertz) occurred near overhead power lines and near equipment with motors, such as shavers and chargers for laptops or mobile phones. For radiofrequency electromagnetic fields the personal use of a mobile phone was the largest contributor to the exposure, followed by the contribution of people using mobile phones in the area, cordless DECT phones and base stations for mobile telecommunications. The highest exposure occurred where many people are together, such as in public transport, railway stations, shopping malls and cafes.

Given the scientific uncertainty on induction of childhood leukaemia and the public concern on possible health effects, the Dutch ministry for Infrastructure and the Environment has issued policy advice on overhead power lines for local governments and grid companies. Aim of the advice is to prevent new situations where children stay for a long time in the area near overhead power lines where the magnetic field exceeds 0.4 microtesla (annual average). This recommendation was based on RIVM research  and on the scientific evaluation conducted by the Health Council of the Netherlands (in Dutch).

RIVM supports the implementation of this policy advice by managing a guideline for calculating the extent of the magnetic field zone in a specific situation and a website with a map (in Dutch) showing an indication of the width of the magnetic field zone for the Dutch high voltage power grid. RIVM also has a signalling function for new scientific evidence on health effects from overhead power lines.

RIVM also maintains a database of international EMF legislation and guidelines. RIVM participated in the working group of the International Commission for Non-Ionizing Radiation Protection (ICNIRP) on general radiation protection principles. RIVM occasionally contributes to ad hoc risk assessment projects such as those of the World Health Organization and the Royal Society of Canada (2013) and for the Irish Government.