It is known that viruses change frequently. There are already thousands of variants of the coronavirus SARS-CoV-2. RIVMNational Institute for Public Health and the Environment is conducting laboratory research to see which variants are present in the Netherlands and what that means for the spread of the virus in the Netherlands. This is known as pathogen surveillance. It is mainly important to know whether the variants that are circulating also have new characteristics that pose additional risks. For example if they are more easily transmitted, if they make people more ill, or if the virus variants do not respond as well to vaccination.

Variants in the Netherlands

There are many variants of the coronavirus SARS-CoV-2 circulating worldwide, and a number of those variants are now being monitored and investigated. The World Health Organization (WHO) and the European Centre for Disease prevention and Control (ECDC) publish weekly overviews of Variants of Concern and Variants of Interest. These variants are carefully monitored and mapped due to their (potential) high-risk characteristics and degree of spread. RIVM is following the recommendations of the WHO and the ECDC in this respect. Through the national pathogen surveillance research, we are also working with laboratories in this country to monitor the coronavirus variants present in the Netherlands.

RIVM conducts pathogen surveillance for the coronavirus, with random positive SARS-CoV-2 samples from GGD test lanes being examined on a weekly basis. That started with dozens of samples every week. As more and more laboratories join the efforts, RIVM now analyses about 1500 samples a week, about one thousand of those from the samples randomly selected in the context of pathogen surveillance. The table below shows the pathogen surveillance results for the Variants of Concern and Variants of Interest identified by WHO and ECDC.

Pathogen surveillance data is updated weekly. New reports may be added up to and including week 33 of 2021 from the submissions provided by the (current and new) laboratories participating in pathogen surveillance. In any case, the figures for week 34 are not yet complete. In addition, numbers per week may differ from previous publications due to updates of sample collection dates or reclassification of the sample in the registration system (source and contact tracing instead of random sampling). These weekly figures are updated retroactively. 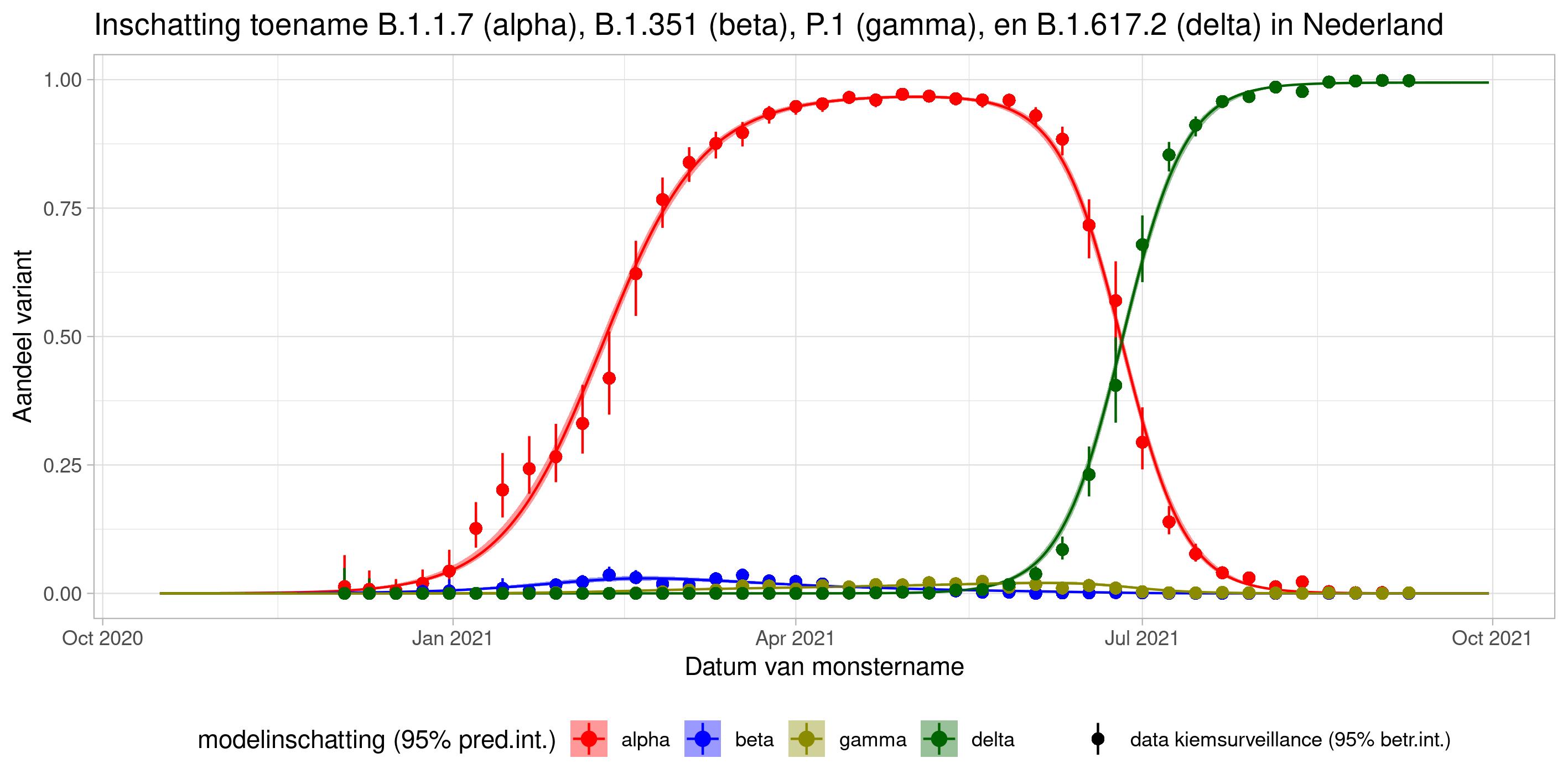 The graph also shows the estimated development of the variants over time, based on data from pathogen surveillance.

The main difference in the UK, South African and Brazilian variants and the B.1.525 variant seems to be the changes in the ‘spike protein’, the lines bristling out from the coronavirus. The proteins of these virus variants may be able to attach themselves to human cells more effectively.

The reproduction number for the Alpha variant is estimated to be higher than that of the old variant of the virus. The R number represents the average number of people infected by someone who has COVID-19. This means that this variant is more contagious than the old variant. For now, there are no indications the vaccination will not be effective against the Alpha variant of the virus. This is being monitored closely all over the world.

Viruses are constantly mutating. Sometimes a virus variant benefits from certain mutations, for example by spreading faster. Mutations of this kind give the virus variants an advantage over the old variants that are already circulating. Some mutations may emerge independently in different variants around the world. The UK previously reported the occurrence of a new mutation (E484K) in the spike protein in the Alpha variant.  Considered cause for concern, this E484K mutation has been detected previously in the Beta and Gamma variants. The immune response following vaccination or previous infection with the virus may possibly be less effective against variants with this E484K mutation. The mutation is also likely to affect how strongly the virus can bind to the cell receptors in our bodies. This E484K mutation has also been identified in the Netherlands during pathogen surveillance.

The Beta variant was detected in the Netherlands in early January 2021. This variant of the virus, like the Alpha variant, also appears to be more contagious than the variant that we had so far in the Netherlands. How the virus responds to current vaccines is currently being investigated worldwide. So far, there is no reason to assume that the course of illness from the Beta variant will be different or more severe than the old variant.

Two new variants of the coronavirus SARS-CoV-2 have been found in the Netherlands, both originating from Brazil. This involves the P1 variant and the P2 variant.

The P1 variant of the coronavirus was found mainly in outbreaks in and around Manaus, the capital of the Brazilian state of Amazonas. It is not yet clear whether the course of illness is different for this variant. Among other mutations, the variant has three changes in the spike protein, the lines bristling out from the coronavirus, that are considered cause for concern. These three changes are almost identical to the changes in the Beta variant. The immune response due to vaccination or due to previous infection with the virus may possibly be less effective against this variant. This is currently being investigated at the national and international levels.

The P2 variant occurs throughout Brazil. The immune response due to vaccination or due to previous infection with the virus may possibly be less effective against this variant. There is still much to learn about the course of illness from this variant as well.

In the context of pathogen surveillance, a new coronavirus variant (B.1.525) was found in the Rotterdam-Rijnmond region and in the Limburg Noord region. This variant was first reported in Denmark. This variant also has the E484K mutation, along with another mutation (F888L) that is being monitored. Further investigation is now taking place in Denmark and the Netherlands.

The WHO has designated the SARS-CoV-2 strain being referred to as the Epsilon variant’, B.1.429/427, as a variant of interest (VOI). This variant was first found in the state of California in the United States (US) in June 2020 and is now circulating throughout the US and 26 other countries. This variant has three mutations in the spike proteins of the virus, including L452R. This variant is being subjected to particular scrutiny by international authorities, because there are indications that the variant may be more contagious than the classical variants, and that certain treatment methods and possibly also the current generation of vaccines may be less effective. This variant has been found in two countries in the Caribbean part of the Kingdom, but has not yet been found in the Netherlands.

The B.1.617 variant was first found in December 2020 in India. There are three different strains of this variant: B1.617.1, B1.617.2 and B.1.617.3. The B.1.617.2 variant is the strain found most frequently in various European countries, including the Netherlands. The prevalence of the B.1617.2 variant is increasing rapidly in the UK. It was first introduced via travellers from India, but is now also spreading through transmission within the local population. The three strains of the B.1.617 variant are different from each other due to multiple minor changes, making it necessary to assess the risks for each strain of the variant. Initial studies in the UK suggest that a single dose of vaccine offers less effective protection against this variant, and that the B.1.617.2 variant is slightly more contagious than the UK variant (B.1.1.7) of the virus. Protection after full vaccination does seem to be effective. The B.1.617.2 variant does not yet seem to be rising in Denmark and Germany. Further research will be needed on vaccine efficacy and protection and on the severity of illness in relation to this variant .

Regardless of which virus variant is involved: follow the measures. Get tested as soon as possible if you have any (mild) symptoms and strictly follow isolation and quarantine measures. This way, you prevent further spread of the virus.  If an infection with one of the variants is found, the Municipal Public Health Services (GGDs) will launch source and contact tracing.

How can you tell which variant of the coronavirus someone has?

If you test positive for COVID-19, the test results do not tell you which coronavirus variant you have. When analysing a COVID-19 test, a laboratory technician cannot see which variant of the coronavirus SARS-CoV-2 caused the infection. This requires further research, known as sequencing. This means further investigation of the virus sample that was taken with a cotton swab in the nose and throat. Sequencing looks at the building blocks of the virus. By looking at how the virus is constructed, it is possible to recognise characteristic ‘building blocks’ of a variant. Sequencing is performed on random samples in the context of pathogen surveillance.

What makes the Alpha variant, the Beta variant, and the Gamma  variants different from the ‘old’ COVID-19 variant?

It is estimated that there are thousands of variants of the coronavirus SARS-CoV-2 by now. The main difference seems to be the changes in the ‘spike protein’, the lines bristling out from the coronavirus. These four variants appear to be more contagious than the old variant. The proteins of these virus variants may be able to attach themselves to human cells more effectively. The immune response due to vaccination or due to previous infection with the virus may possibly be less effective against the Gamma P1 variant. This is currently being researched in various countries.