It is known that viruses change frequently. There are already many variants of the coronavirus SARS-CoV-2. RIVM is conducting laboratory research to see which variants are present in the Netherlands and what that means for the spread of the virus in the Netherlands. This is known as pathogen surveillance. It is mainly important to know whether the variants that are circulating also have new characteristics that pose additional risks. For example if they are more easily transmitted, if they make people more ill, or if the virus variants do not respond as well to vaccination. These are known as Variants of Concern (VOC) and Variants of Interest (VOI).

The table below shows the pathogen surveillance results for the Variants of Concern and Variants of Interest identified by WHO and ECDC. The total number of samples analysed in the context of pathogen surveillance includes not only the variants in this table, but all other variants as well. These results show the samples that were successfully analysed. The samples that were not successfully analysed are not shown in this table. The underlying data is public. The full data set also contains the data on the current Variants under Monitoring.

Pathogen surveillance data is updated weekly. The numbers for the last few weeks may still change slightly. This is because new reports may be added from data provided by the (current and new) laboratories participating in pathogen surveillance. In addition, numbers per week may differ from previous publications due to updates of sample collection dates or reclassification of the sample in the registration system (source and contact tracing instead of random sampling). Comprehensive data is not yet available for the latest week; these weekly figures are updated retroactively.

** Due to changes in the typing tools, many samples that were previously designated as 'probable'  Omicron were no longer typed as such and were placed in the 'unassigned' category.  With a minor update to the typing process, this issue has been resolved. This leads to retroactive changes in the classifications.

Omicron BA.5 is dominant in the Netherlands

So far, the Omicron variant has five sub-variants that are currently being monitored closely. These have been designated BA.1, BA.2 (including sub-variants BA.2.75 and BA.2.12.1), BA.3, BA.4 and BA.5.

According to the WHO, these new variants do not appear to cause more serious illness than the BA.2 variant that was recently most prevalent in the Netherlands. However, there are indications that antibodies may be less effective against these variants.

Sub-variant BA.5 became dominant in the Netherlands in June 2022. The percentage of these and other variants is being monitored in the context of pathogen surveillance and by means of variant PCR. 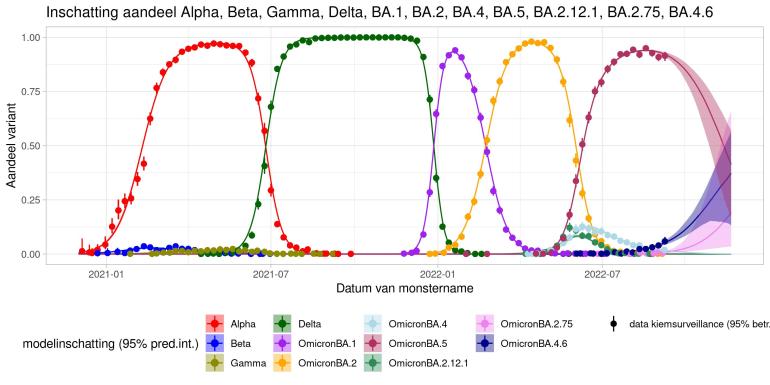 The graph shows the Alpha, Delta and Omicron variants (and Omicron sub-variants) of SARS-CoV-2.

Since July 2022, various countries have observed a sub-variant of the Omicron BA.2 lineage: BA.2.75. This sub-variant has been found in India, Australia, Japan, Canada, the USA, Germany, Denmark and the UK, among other countries. BA.2.75 has been increasing in pathogen surveillance in the Netherlands.  It is too early to say whether this will lead to an increase in the number of SARS-CoV-2 infections. BA.2.75 seems to have minor specific mutations that enable it to more easily evade the immunity built up against COVID-19 (by vaccination or previous infection). There are no indications that the BA.2.75 sub-variant would be more likely to cause severe illness compared to the other Omicron sub-variants. This sub-variant seems to be increasing slowly in the Netherlands and in the surrounding countries. RIVM is monitoring the situation very closely. 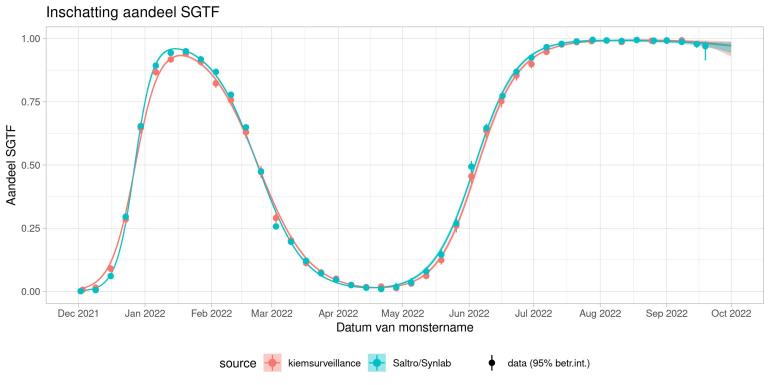 The increase in specific variants is also being monitored in cooperation with Saltro by means of variant PCR. Variant PCR data can be accessed a bit sooner than sequencing from pathogen surveillance. The variant PCR data displayed in the figure above offers an indication for whether the BA.4/5 sub-variants are present, although this method does not detect their presence with certainty. It also does not show the differences between BA.4 and BA.5. The data also offers an indication for whether BA.2.75 is present. The latest trend forecast indicates that BA.4/5 will decrease, accompanied by an increase in other variants, such as BA.2.75. The margins of uncertainty in this forecast are still significant.

Omicron variant is dominant in the Netherlands

The first cases involving the Omicron variant (B.1.1.529) of the coronavirus SARS-CoV-2 were reported in South Africa at the end of November 2021. The percentage of cases involving the Omicron variant is rising rapidly around the world. In the Netherlands, it is the dominant variant. This means that most people who test positive for COVID-19 have the Omicron variant of the coronavirus. Similar to other variants, the small changes (mutations) in this new variant are seen mainly in the lines bristling out from the coronavirus: the spike protein. A striking feature of this variant is that it has an unusually large number of mutations in the spike protein. That includes a number of mutations at locations that alter the properties of the virus.

Reproduction number R: how fast is the virus spreading?

When assessing the risks of a virus variant, it is important to know how contagious the variant is and how easily it spreads. Once there are more cases involving a specific virus variant, RIVM can calculate the reproduction number for that variant. The R number represents the number of people infected by someone who has the virus. It shows how quickly a specific variant can spread.

Monitoring variants in the Netherlands

The World Health Organization (WHO) and the European Centre for Disease prevention and Control (ECDC) publish weekly overviews of Variants of Concern, Variants of Interest, and Variants under Monitoring. These variants are tracked due to their (potential) high-risk characteristics and degree of spread. RIVM is following the recommendations of the WHO and the ECDC in this respect, and advising these bodies based on its own findings.
During pathogen surveillance, randomly selected samples are examined every week. These samples come from people who tested positive for the virus in a GGD test lane or a hospital in the Netherlands. In 2020, it started with dozens of samples every week. More and more laboratories joined the efforts, and RIVM now analyses about 1800 samples a week, about 1500 of those from the samples randomly selected in the context of pathogen surveillance.

So far, the main difference in the virus variants seems to be the changes in the ‘spike protein’, the lines bristling out from the coronavirus. The proteins of these virus variants may be able to attach themselves to human cells more effectively.

The P.1 Gamma variant of the coronavirus was found mainly in outbreaks in and around Manaus, the capital of the Brazilian state of Amazonas. It is not yet clear whether the course of illness is different for this variant. Among other mutations, the variant has three changes in the spike protein, the lines bristling out from the coronavirus, that are considered cause for concern. These three changes are almost identical to the changes in the Beta variant. The immune response due to vaccination or due to previous infection with the virus may possibly be less effective against this variant.  The P.1 Gamma variant is currently no longer detected in pathogen surveillance.

How can you tell which variant of the coronavirus someone has?

If you test positive for COVID-19, the test results do not tell you which coronavirus variant you have. When analysing a COVID-19 test, a laboratory technician cannot see which variant of the coronavirus SARS-CoV-2 caused the infection. This requires further research, known as sequencing. This means further investigation of the virus sample that was taken with a cotton swab in the nose and throat. Sequencing looks at the building blocks of the virus. By looking at how the virus is constructed, it is possible to recognise characteristic ‘building blocks’ of a variant. Sequencing is performed on random samples in the context of pathogen surveillance.

Can the PCR tests accurately identify the Omicron variant?

Yes. Various laboratories, including the WHO Reference Laboratories at RIVM and Erasmus MC, have investigated this and confirmed that they do.

The PCR tests detect the presence of small fragments of genetic material from the coronavirus SARS-CoV-2 in nasal and throat mucus. PCR tests are used to determine if you have the virus right now. If you test positive for COVID-19, the test results do not tell you which coronavirus variant you have. This requires further research, known as sequencing. This means further investigation of the virus sample that was taken with a cotton swab in the nose and throat. By looking at how the virus is constructed, it is possible to recognise characteristic ‘building blocks’ of a variant.

Do the self-tests also detect the Omicron variant?

A self-test is an antigen test which is suitable for home use. Antigen tests, like PCR tests, only check if you are carrying the virus at that moment. The test does not check which coronavirus variant you have. This requires further research. For that purpose, a new PCR test sample must be taken, which is then used for sequencing. This means further investigation of the virus sample that was taken with a cotton swab in the nose and throat. Sequencing looks at the building blocks of the virus. By looking at how the virus is constructed, it is possible to recognise characteristic ‘building blocks’ of a variant.

Are the virus variants also being found in coronavirus monitoring in sewage?

Sewage samples are also analysed to check for the presence of different variants of the coronavirus SARS-CoV-2. Since week 48 of 2021 (29 November to 5 December), the Omicron variant has also been found in sewage in the Netherlands. In the weeks before that, only the Delta variant had been found in the sewage samples.